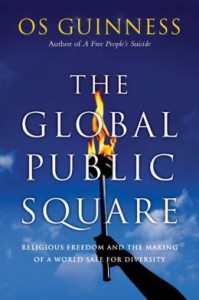 The Global Public Square: Religious Freedom and the Making of a World Safe for Diversity (paperback, kindle) is a book that starts and ends on high notes, but there are some dissonant chords in the middle.  When I first heard that this book was going to be available as an option within our book club here at Patheos, I wondered how an idea that seems so obvious to me could necessitate 212 pages to cover.  And, unfortunately, after reading the book, I think the answer is:  it doesn’t.

The book deals with what the author, Os Guinness, terms soul freedom which is often expanded throughout the book as the freedom of thought, conscience, religion, and belief.  In its longer form, it’s a powerful set of freedoms and it’s important that Guinness separates these four concepts because, in so doing, he’s included atheists, spiritual seekers, and philosophers alongside theists and other believers.  In fact, he makes this point clearly throughout the book.

But, I remain confused as to whether or not Guinness offers us a clear understanding of his message. On the one hand, the author states (rightly, I think) on page seventy that “[soul] freedom is absolute at the point of belief, but qualified at the point of behavior, because behavior touches other people and other things” but within ten pages he’s criticizing the Affordable Care Act’s mandate that employers or insurance companies must cover contraceptives.  How is this not a qualification on behavior?  The ACA doesn’t outlaw anti-contraceptive belief, it simply makes clear that one cannot impose that belief on others. Even more confusing, at the end of the book, he writes:

Is this an overly confusing way of restating his point regarding the qualification of behaviors?  And, this is not the only time in which he brings up GLBT rights and other aspects of the sexual revolution, usually with a negative connotation.  His overt denigration of our culture wars stands at odds with what seem to be his own shots fired within them. I suspect that the author’s own bias (he introduces his faith, Christianity, in the beginning of the text) is apparent at such times.

To be fair, Guinness doesn’t focus only on America.  In fact, he touches on us probably less than he does on other countries.  He digs deeply into various practices of the governments of the United Kingdom, France, the Netherlands, Saudi Arabia, Pakistan, India, and China throughout the text and uses the thinking of philosophers, religious and otherwise, to make his points.

Unfortunately, these explorations take up the majority of the book.  After 179 pages, and a mere thirty-two pages from the end of the book, Guinness gets around to discussing his idea of the civil public square in chapter eight.  He describes such a thing as one:

[…] in which citizens of all faiths and none are free to enter and engage public life on the basis of their faith […] forged through an agreed political framework of rights, responsibilities and respect, within which each faith is free to be faithful to its own beliefs and yet responsible to know how to deal respectfully and civilly with the vital differences of other beliefs.

He also touches on the relative benefits of persuasion against the costs of coercion and it is here where we can begin to understand Guinness’s opposition to the actions of the aforementioned governments:  laws necessarily coerce behavior from those who oppose them.  However, I don’t think that he makes a convincing argument that the civil public square could overcome deeply held and opposing beliefs to reach some sort of consensus regarding behavior.  But, I wonder: if he had spent more than twelve pages attempting to do so, would he have been more successful?

The civil public square is a truly fascinating glimmer of an idea hidden by the glare produced by the exploration of problems throughout the world that create the need for it.  I enjoyed the book overall, and I think those who find the idea of the civil public square to be as interesting as I do will find value in working their way through it.  But, for every person that makes it to the good parts, I suspect that many will become tired of the hashed and rehashed examples throughout.

Next time, I hope to share my progress in setting up a Pagan chapter for the Foundation for Religious Diplomacy, an organization that I think is trying to implement some of what Guinness describes in his text.  See you in two weeks!