Diversity – A Lot of Work

Oops – I’m chairing the nominating committee for Interfaith Partners of S.C. for the next four weeks, leading up to when we must present a slate at our November 4 annual meeting. It’s just work that must be done in any organization, but each small part of the process takes on deeper, more tender, meaning when it involves multiple religions, cultures, ethnicities, genders, etc.

Natural tensions exist, of course, between most religions and individuals:

Vague (or acute) awareness of painful histories in other times and places, repercussions of which still haunt;
Consciousness that one’s religious group is primarily composed of people of color, so often discriminated against in our society;
Ongoing frustration that others do not understand and therefore may not value one’s spirituality;
Difficulty of generating interest in interfaith work among one’s own religion (count me in here);
Awareness that others question whether one’s group is even a legitimate religion;
Feeling the uneven balances of power created by sheer numbers in majority religions.

Never mind trying to achieve better geographic representation across the state, considerations of ability, availability and commitment, mix of gender, race and age. Diversity is a lot of work. 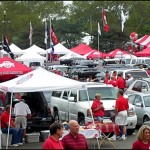 When I watch local news or go to an event or a restaurant, I’m often struck by the apparent homogeneity of my locale. Unfortunately, I have little in common with those I place in that stereotype: I don’t care about college football; have never been tailgating or to the Camden Cup races; rarely dress like other professional women any more; and almost no one around me reads the same books as I. This makes it easy for me to assume that everyone not like me is a sort of undifferentiated mass, unworthy of my concern or attention. I would be mistaken. 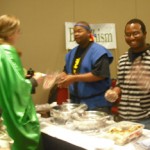 Despite appearances, I live in a wonderfully-diverse state. Were I to have any doubts about that, I would only have to turn up at an interfaith event to realize just how much variety abounds. My life has been changed so much for the better by my growing friendships with people whose beliefs and backgrounds differ a great deal from mine. They cause me to continually reflect, challenge myself, seek to better understand things unthinkable and mysterious, and examine the true nature of relationships both in and out of the context of spirituality.

So, on to the work of a new business year. As my committee tries to fit together the pieces of our organizational puzzle I pray for wisdom, discernment and grace

October 8, 2013 On Disagreements and Discrimination
Recent Comments
0 | Leave a Comment
"I do not know how I have not seen this article before. Wonderful to read ..."
Donna Donovan Interfaith in Prison
"David - I am not totally sure if you are the same David who said ..."
T B Interfaith as a Pagan: Assumptions
"Wow - powerful story, Sage. Thank you."
Holli Emore Blood Feud
"On the subject of cutting things out of one's life without understanding how they are ..."
Sage Blackthorn Blood Feud
Browse Our Archives
get the latest from
Pagan
Sign up for our newsletter
POPULAR AT PATHEOS Pagan
1

Litha: the heat is on – go play,...
Litha is here and it is the longest day of the year....
view all Pagan blogs
What Are Your Thoughts?leave a comment
Copyright 2008-2021, Patheos. All rights reserved.