The “Faith” aspect of Interfaith

The “Faith” aspect of Interfaith

At a recent interfaith board meeting, we were discussing the finer points of what it means to do interfaith work, most specifically, how do we as individuals and interfaith spokespersons reach out to the newly arrived group that call themselves Spiritual, But Not Religious (SBNR). To me, it was fairly obvious that we continue to do as we have done with other faith communities:  provide educational information about all the religions/faiths/non-faiths that are in active use. A fellow board member of a Christian doctrine was confused about how to provide SBNR’s with a sense of community, since no one faith angle would strike their fancy. I shared my experience of a metaphysical community I was a part of for a time to help my fellow ‘interfaith-er’ to understand that SBNR’s are searching for the same component of togetherness that Christians search for.  They just do it with different words, different thought approaches, and different meanings.  SBNR’s want to experience that kindred-connection in knowing that they are not alone in their search, and that who and what they are about is just as accepted as the concept that the noon hour is a good time for lunch.

Later that week, while having breakfast with a colleague, I shared my experience at the board meeting with her, to which she responded with a poignant statement:  Faith work doesn’t necessarily have to apply to a deity of any faith tradition.  The faith in Interfaith could simply represent one’s faith in.. humanity, per se. Or perhaps one’s faith in government. Or faith that one will wake up the next morning and be able to get in their car and go to work, etc.

This eye-opening statement sent me straight to Merriam-Webster’s online dictionary. I found that the word faith has three different meanings for defining this very simple word:

: strong belief or trust in someone or something

: belief in the existence of God : strong religious feelings or beliefs

: a system of religious beliefs

There are so many angles and approaches of which I could focus, breaking down these definitions.  Shall I raise the fact that the second definition equates faith to having a “belief in the existence of God?” I mean, I have an overwhelming belief in the existence of the Universe. I wouldn’t necessarily feel comfortable confining my belief onto one deity, especially one that has become shaped over the years by the eyes of man.  I mean really.  Who am I to tell G-d, or whoever is up there watching over us what he or she is supposed to look like?

The point that I have ever so eloquently (not) eluded to is the fact that interfaith work is defined by so much more than just religious traditions.  Interfaith work touches on the ethical and moralistic values our human society holds by a common thread: living our lives day to day.

One’s cultural values, dogmas, and/or creeds that have been passed down the familial line of tradition are what make us who we are today. Using the action of burping at a table, which in some cultures tells the cook that the diner thoroughly enjoyed her meal, is in other cultures perceived as a vulgarity beyond measure!  What occurred to rip our initial cultures apart, therein creating the need to worship in a particular fashion over a meal?

Religious faith and societal beliefs are so interwoven, that they must be ripped apart at the seams to determine which lays where:  did this belief or value come from some intrinsic ancestral experience that developed out of the mere necessity of survival?  Or did one of our ancestors have a hallucinogenic experience that stemmed from the first time they ate a bad mushroom?

What we do know is that every single one of us on this planet has a unique belief system that is so strong we end up holding it so tight to our chests, having created acts of faith based on that system.  So, I’m holding it in good faith that interfaith work will open up the abyss of distance between us, creating a new world of connection, oneness with each other, and an acceptance of who we are, and of what we believe in.  {Burp} 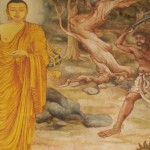 October 4, 2013 Diversity - A Lot of Work
Recent Comments
0 | Leave a Comment
Browse Our Archives
get the latest from
Pagan
Sign up for our newsletter
POPULAR AT PATHEOS Pagan
1

Shadow Work and the Magic of...
The Balancing Path
Related posts from Wild Garden

Trump is Fundamentalism’s Battle of the Bulge
History doesn’t repeat itself, but it often rhymes – and history is...
view all Pagan blogs
What Are Your Thoughts?leave a comment
Copyright 2008-2020, Patheos. All rights reserved.