And finally, after 30 years of living in Columbia, I am holding my head a little higher. Even though the city wanted the Confederate flag gone for a long time, the State House island at the end of Main Street in downtown was a refuge for hardline bigots and the faint of heart. Unwilling martyers they, the Emanuel 9 murders accomplished what common sense could not. So what does this have to do with interfaith?

Well, the second monthly local interfaith meetup was Wednesday night. I noted among the gathering four Muslims, a Lutheran, three Pagans, a Pentecostal, two Methodists, two Catholics, a Buddhist, a Unitarian Universalist, a Presbyterian, a Baha’I, a Baptist (American), and a Kemetic. Though mostly middle-aged, we had at least one teen, skin color was about half people of color and half people of light skin, and there were roughly equal numbers of males and females. Also among us was a U.S. Department of Justice community relations director for the Southeast – more about Mr. Battles below — and two from our state office of Human Affairs.

My good friend Zohra, an Indian-born Muslim, was there with her husband, their daughter and their grandson. Daughter Nazneen, who lives in Austin, Texas, was excited to visit the group her mother had told her so much about. She was pleased when some of us thanked her quietly for joining us all during a meal three hours before they could break their Ramadan fast. She also shared an important thought, that as we grieve and heal together from the events of the past few weeks, we must follow the healing with justice. The voices of justice, she said, must be even louder than the voices of grief and even healing, for without justice, we will only repeat the cycle of grief and healing. 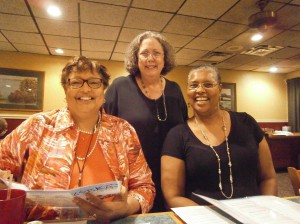 Surely, however, the message from Tom Battles was most exciting to me. He told of spending time the past year in Ferguson, Missouri, and in Sanford, Florida, and reminded us that a mosque was burned in Murfreesboro, Tennessee, only a few years ago, followed later by a deadly church shooting at a Unitarian Universalist congregation in the same state. His job is to rally community organizations, including faith groups, to prepare themselves for the possibility of such violence, as well as to dilute rising tensions which could lead to violence.

He lauded Charlestonians’ refusal to riot or vandalize, even while South Carolinians across the state were having difficult conversations which had largely been avoided for several decades. He noted that when the New Black Panther Party marched in front of Mother Emanuel and called for blacks to take up arms, area ministers (as well as Al Sharpton and Jesse Jackson) told them to go home. Battles also shared that the city of Sanford avoided riots after the Trayvon Martin verdict largely because of the interfaith work done in the community during the months leading up to the trial. He said, “You folks should be the ones on CNN, because you are doing the work that saves lives.”

Indeed. Unfortunately, the local media pay no attention to any but th 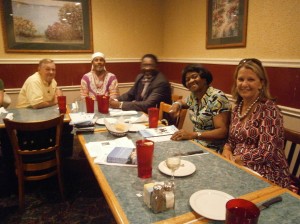 e better-organized and larger evangelical groups. Those of us in minority religions are less interested in publicity because we have no conversion doctrines. As I watched news coverage last night on still another large prayer breakfast discussing ways to achieve racial healing, I could only remind myself that my interfaith group simply missed an opportunity to show our relevance, and we cannot blame others for not noticing something we are not doing.

On the other hand, our work is far more subtle, and arguably more powerful, than the publicized events of our evangelical Christian comrades. That’s why it is so important that we continue. And what is it we do? We make friends with each other, get to know each other, and demonstrate that the simple act of friendship can save the world.

July 22, 2015 Deborah Ann Light: A Life Well Lived
Recent Comments
0 | Leave a Comment
"I do not know how I have not seen this article before. Wonderful to read ..."
Donna Donovan Interfaith in Prison
"David - I am not totally sure if you are the same David who said ..."
T B Interfaith as a Pagan: Assumptions
"Wow - powerful story, Sage. Thank you."
Holli Emore Blood Feud
"On the subject of cutting things out of one's life without understanding how they are ..."
Sage Blackthorn Blood Feud
Browse Our Archives
Related posts from Wild Garden