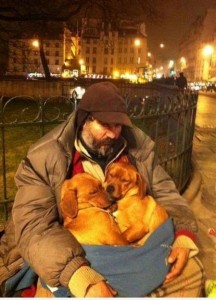 I’m involved with many activities that use the terms social activism, community awareness, sustainability, equality, interfaith, tolerance, acceptance, and strength in diversity.  The list of terms could go on and on.  One of those activities happened during the Compassion Games, September 11th – 21st. My Compassionate Winston-Salem (CWS) group served a wonderful meal during this period to the residents of the Bethesda Center, an overnight shelter for the homeless.

What was really interesting about this experience is that we had to keep reminding the employees and the residents of the homeless shelter that our group was not from a faith-based organization.  This particular group started from the initiative of a community-based organization.

Taken aback from what seemed like an obvious answer, I responded with the example of Samaritan Ministries.  This homeless shelter actually has a kitchen that serves lunch and dinner to the homeless. They’ve been doing this for over 25 years, and as time has marched on, not only has the amount of people they serve each day grown in size, so too has the ethnic and racial demographics that Samaritan serves become more diverse. What was most likely a simple mix of Christian sects of the people being served in the early days of Samaritan, it has without a doubt become more complex as there are most assuredly, Muslims in the count, as well as Hindus, Jewish and Pagan meal-takers that are down on their luck, and receiving assistance in some form from the programs offered by Samaritan.

With that said, Samaritan’s focus is not that of interfaith work.  Their purpose is merely to feed the homeless, and offer them a place to sleep, and in some cases, doing case management to help the individual change his or her situation. While Samaritan’s mission is built off the Christian story of the Samaritan, the results are based on acts of service, not acts of any one faith.  It is but an offshoot result that the work they are doing happens to touch on the brim of interfaith. Hence, it is quite prudent that an interfaith organization be the best fit for birthing a Compassionate group.

A compassionate group of people typically find solace in serving the community.  While each individual of the group may generally take comfort in their connection with their own idea of a G-d, G-ddess, or any deity for that matter, I have heard on more than one occasion that the act of serving actually leaves that individual feeling even more connected to their deity than they would have had they just stayed home.

I think this is where the heart of interfaith lies.  In the community – the fact that out of 234,000 citizens in Winston-Salem alone, there is NO WAY that each and every one of us could fathom to walk in the same faith. Why would we want to? I think instead, each of us could find some measure of comfort in the fact that we are walking our lives together, strong in our diversity, serving humanity together from different walks of life.

October 18, 2013 Community Pilgrimage - Sharing Our Faiths
Recent Comments
0 | Leave a Comment
"I do not know how I have not seen this article before. Wonderful to read ..."
Donna Donovan Interfaith in Prison
"David - I am not totally sure if you are the same David who said ..."
T B Interfaith as a Pagan: Assumptions
"Wow - powerful story, Sage. Thank you."
Holli Emore Blood Feud
"On the subject of cutting things out of one's life without understanding how they are ..."
Sage Blackthorn Blood Feud
Browse Our Archives
get the latest from
Pagan
Sign up for our newsletter
POPULAR AT PATHEOS Pagan
1

Death and the Solitary Hallows
This Hallows I urge you to contemplate knowledge that can only be...
view all Pagan blogs
What Are Your Thoughts?leave a comment
Copyright 2008-2020, Patheos. All rights reserved.