For our ancient ancestors having a fear of that which is “different” was a survival trait that kept them alive.  And this deeply engrained trait has remained active throughout human history into the present time.  However, it is now more of a problem than it is a help in promoting peace and understanding amongst groups of peoples.

One area in which this fear of the “different” has remained strong is the realm of religion.  And this fear has led to violence, open warfare, and even genocide, not in ancient times, but within living memory.  From the Holocaust to planes flying into the World Trade Center, we have seen religious warfare conducted in front of our eyes.  We have learned to fear the different in religion because that different now seems a threat towards ourselves and our families.

As modern Pagans here in the United States we haven’t seen attempts at eradicating us from existence.  However, there are verifiable cases where children were taken from their parents, jobs were lost, homes were destroyed, and individuals were harassed because of their beliefs…because those beliefs were “different” and therefore suspect.  And we have seen those in the Pagan community express prejudice against those of other faiths because we too are guilty of judging others when their beliefs differ from our own.

Part of the problem in maintaining this appearance of difference and strangeness is that so much of the actual practice of religion goes on behind closed doors where we cannot see what is actually being said and done.  As a chaplain of my acquaintance has stated on numerous occasions regarding his own Christian community, “The most segregated time of the week is Sunday when church services are in session.” We have built walls of ignorance between ourselves and those of other faiths out of fear of the “different”.  This ignorance of what goes on in other religious services leads to rumors and suspicions.  What is really going on there?  In our isolation from actual knowledge we leave ourselves open to unwarranted fears.

Here in my own community our local interfaith community of the Interfaith Mission Service has attempted to remove some of those barriers to understanding by conducting a yearly Community Pilgrimage program.  During the month-long program various houses of worship of a number of different faiths open their doors to any who are interested to visit, to take part in worship services, to ask questions about the beliefs and faiths with which they are unfamiliar, and to meet and mingle with people of different religious persuasions.  The purpose of the Pilgrimage was clearly stated as “The focus is on experiencing sacred gatherings and spiritual practices of different cultures – all the while nurturing a shared commitment to deepened understanding of “the other.”

The first stop on our pilgrimage was the Church Street Cumberland Presbyterian Church on September 29th.  This church was established in 1874 as the first black Cumberland Presbyterian Church in the nation and one of the first black churches in Huntsville.  Themselves the past (and present) victims of prejudice and often hatred, this congregation opened their doors and their hearts to those of any faith who wished to attend this open service.

For those of us who are Pagan, the joy and the energy of a traditional service were familiar territory to any who have worked with ecstatic energies in the course of a ritual.  There was a simple and natural joy that united all of us in reaching for the Sacred.

Part of the services including the saying of the Kadish, the traditional Jewish ritual of remembrance for the dead.  Given the proximity to Samhain this seemed especially appropriate.  And it was personally touching for myself as it marked the one-year anniversary of the death of my own brother.

On October 5th we were invited to attend a special service at Saint Joseph Catholic Church. Saint Joseph Church was established in 1950 by the Salvatorians as a mission to the black community of Huntsville, Alabama.  This very special Saturday service was dedicated to the blessing of the animals.  The church was filled with people and their beloved pets of many different kinds.   As a Pagan this acknowledgement of the love of the Divine, by whatever name we choose to call it, for those creatures that share in this Divine creation that we call planet Earth was a familiar part of our beliefs.  It was a reminder that we, as humans, bear a special responsibility as caretakers of the living resources of our Mother.

As our guide explained, Hindus believe in one Supreme Being who is infinite, all-pervading and eternal and the source of all creation. God is in everything that exists, and is at the same time beyond the manifest universe. The various functions and aspects of the Supreme Being are given different names. For instance, the Trinity of Hinduism consists of Brahma – the Creator, Vishnu – the sustainer,  and Shiva – the Destroyer. The incarnations of the Trinity are worshiped in various forms.

As both a polytheist and as a panentheist, the teachings of Hinduism seemed very familiar.  A reminder that while Deity might take many forms in many different religions, at the heart what we were acknowledging with the presence of the Divine throughout creation.

The last visit on our Community Pilgrimage will be made to the Islamic Center of Huntsville on October 27th.  In many ways this may be the most important stop on our interfaith journey.  As with modern Pagans, those who follow Islam have been the victims of prejudice based on misunderstanding of their religion and on the acts of radicals whose behaviors have not been in accordance with the Koran.  One hopes that meeting people face-to-face and giving a personal connection to Islam will go a long way to reducing the current animosity towards this religion and its followers.

So our spiritual journey is reaching its end.  For me this has been a journey full of love and caring that transcends religious boundaries.  It has been an opportunity to realize what we all share in common, that by whatever name we choose to call the Divine, our various faiths are trying to show us how to live rightly with our Gods and how to treat our fellow human beings, no matter that their religion is different from our own.  If we can but build that bridge here at home, then perhaps in time we can build a bridge of universal understanding that will bring an end to religious violence around the world. 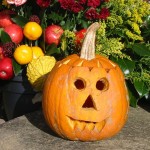 October 22, 2013 Halloween: an Interfaith Teachable Moment
Recent Comments
0 | Leave a Comment
Browse Our Archives
get the latest from
Pagan
Sign up for our newsletter
POPULAR AT PATHEOS Pagan
1

Creating Spirit Ally Relationships With Your...
3 Pagans and a Cat
Related posts from Wild Garden