They’ve Got My Back 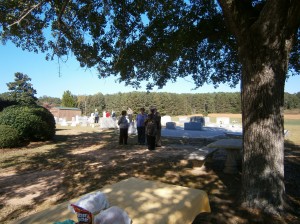 Little white country church, a beautiful Sunday afternoon, friends, cookies and punch on the picnic tables outside, a harpist and flautist playing a pleasant half-hour prelude – this was the scene that greeted me when I arrived at Clayton Memorial UU in Newberry, S.C. on October 20 for a panel discussion called “Interfaith Perspectives on Compassion.”

My colleagues on the panel were Bishop Herman Yoos of the S.C. Synod of the ELCA (Lutheran) Church, Imam Omar Shaheed, Rabbi Jonathan Case, and Rev. Ralph Grofano, minister of Clayton Memorial. As we all took our seats, I was pleased to see that the audience included far more diversity than people assume exists in a tiny, rural S.C. town. My guess is that ages ranged from teens to quite elderly. A number of people in the audience wore clerical collars, a couple wore turbans, and a gaggle of African American women friends had come from morning services at their own churches still dressed in beautiful Sunday suits and hats. A former state 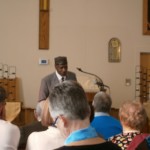 senator sat smiling on the front row, and one group had driven nearly four hours (from Beaufort) to be with us!

Each religious leader was given ten minutes to give remarks about how our religious tradition leads us to live with compassion, then we all stood together to take questions from the crowd. What did people ask? Things like, How can we act more and think less? Shouldn’t compassion start with people at the lowest rungs of society? Our Sikh friends rose to challenge everyone about the violence done to animals to satisfy our appetite for meat. I must say that I felt quite refreshed when it was over, like I’d “been to 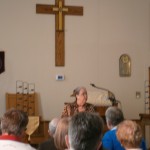 church”! Bishop Yoos spoke of my favorite Jesus parable, the Good Samaritan. Rabbi Case shared in his wonderful storytelling manner. My good friend Omar inspired me, as usual. Ralph reminded us of the great Unitarian Universalist principle of recognizing the inherent worth and dignity of every person.

Back outside under the oak trees when it was over, I confess that I was stunned by the many people who came up to tell me how much they liked – really liked – what I shared. A Buddhist man said that my remarks resonated strongly with his own beliefs. An African-American Muslim woman made a big show in front of her friends of telling me that she came thinking the word “pagan” meant someone who did not 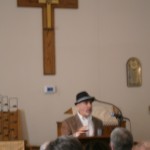 believe in god, but that she now understood differently, saying she thought I believe in god even more than she does! (This, even though I clearly stated that Pagans tend to be polytheistic, or even agnostic.) Only one edgy guy challenged me on a point of history, which gave me the opportunity to thank him for sharing with me and giving me the chance to correct my remarks. He was obviously disappointed that I did not want to argue with him, and I learned later that he is a war vet who suffers from serious PTSD.

Later, I reflected on how loved and supported I felt during this experience, not just personally, but as a member of a minority and often-misunderstood spirituality. Three years ago, I would have chuckled at 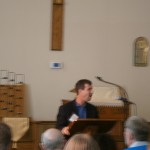 the idea that I might be on a small panel with a bishop, or be introduced with such warmth and respect. As it happens, some of those same leaders did have apprehensions about me when we first began our interfaith work together (as members of Interfaith Partners of S.C.). The ease and comfort with which we all presented together on October 20 is a testament to the journey we’ve made in three years.

One realization startled me, however – I found that I was more comfortable describing my theology to a group of non-Pagans than to some of my fellow Pagans. I realized that these people have my back. They have come to respect me. They most certainly do not share my beliefs, though they recognize much that we have in common. But they value my contributions, treasure me as another human making my way through life. In the oft-contentious world of contemporary Paganism, I do not always see such acceptance and respect. We are good at circling the wagons against the outside, but how well do we support our own?

So, I am entering the season of darkness and the new year with gratitude for the people who I realize have my back, the ones who I think will be there for me when the day comes that I’m under public fire. I hope that our Pagan community will a) learn to better support and respect each other, and b) step out into the wider faith community and build supportive relationships. You never know when you may need someone at your 6 o’clock.

October 30, 2013 What to say when they come to your door
Recent Comments
0 | Leave a Comment
"I do not know how I have not seen this article before. Wonderful to read ..."
Donna Donovan Interfaith in Prison
"David - I am not totally sure if you are the same David who said ..."
T B Interfaith as a Pagan: Assumptions
"Wow - powerful story, Sage. Thank you."
Holli Emore Blood Feud
"On the subject of cutting things out of one's life without understanding how they are ..."
Sage Blackthorn Blood Feud
Browse Our Archives
get the latest from
Pagan
Sign up for our newsletter
POPULAR AT PATHEOS Pagan
1

Why Do So Many of Us...
John Beckett
Related posts from Wild Garden