What to say when they come to your door

I was struggling with what to write this week, when an interfaith encounter came to my door. The gods work in obvious and unsubtle ways. And, as a side note, I’m a day late and a dollar short in posting this week. I had a thesis defense on Monday, so I hope you will all forgive me for the delay.

I’m sure a lot of you have had similar experiences and have likely even devised a method of handling the door to door religion salespeople. I’ve heard a number of different ways of dealing with proselytizers and most of them are not, shall we say, “polite.” There’s the “slam the door in the face” method, the “frighten them with how PAGAN/WITCHY you are” approach, the “I know more Bible than you” method, and the “I”ll listen to yours if you listen to mine” tactic, among others. Southern politeness generally gets the best of me, though there have been occasions where I would have rather been rude and told them to go away. I rather resent the implication that Bob the Baptist who has known me for all of thirty seconds is just certain I’m going to Hell if I don’t come to his church. I’m not knocking Baptists, mind you. My Mamaw was Baptist and she was instrumental in teaching me how to be a good person. I find unilateral judgment based on a person’s religion to be distasteful. Most Baptists are fine people, but I did have a rather rude proselytizing visitor once who also happen to be Baptist. I imagine Mamaw would have given them a stern look for being so rude.

Anyhow, this week’s visitor was a Jehovah’s Witness. Proselytizing is their schtick and while I seriously considered going the “Let me read to you from my ancient texts” route, I chose to do things differently. When I was first studying as a n00b Pagan, we were taught that “All paths are sacred.” That’s a statement I can absolutely get behind, but in practice, some of my cohorts acted as though “All paths are sacred, except those Christians and especially the Protestant Evangelical ones.” I’ve never liked that or tolerated it. After a lot of thought and consideration, I altered my take on the old saying by just a little. I now say “All paths to enlightenment are sacred.” There are a lot of ways to think about enlightenment, but in this case, it means being skilled at being a person and acting out of compassion.

I look at proselytization like this: they want others to join their tribe and have the good feeling they get from their relationship to the divine and they feel it’s the right thing to do to “save” as many people as possible. From their perspective, it’s a good deed. I see where they’re coming from, even though their path doesn’t speak to me. If it brings them fulfillment and helps them be skilled at being a person, there’s no reason for me to get all defensive and rude. After all, I’m a polytheist; it’s no skin off my nose if someone has a god I don’t worship. There are gods in the Greek pantheon I don’t worship, mainly because there are rather a lot of them.

So I told the cat not to harass the Christians because he’s a rude little beast with no manners and otherwise listened to them with my science ears on. I find their ways strange and interesting enough to be a polite listener and I could easily say “There are many beautiful things in the Bible,” because there are. And who am I to criticize their mythology? I worship the Greek gods. Seriously, have you read the Greek myths? Glass houses and all that. Because I am who I am, I invited them to our interfaith meeting, which they politely declined, and said “Gods be with you” as they left. Whether they heard the plural is irrelevant, because it was a sincere blessing. Later, I said a private prayer to Hermes for their safe travels.

In the end, I treated these Jehovah’s Witnesses like I’d treat anyone: with compassion and courtesy. Their god wants them to go door-to-door; my gods want me to treat strangers with respect.

There is a darker side to proselytization and evangelism, which I will get into at a later date. For the purposes of this post, I wanted to address how I can act in an honest and respectful way in a situation such as this. 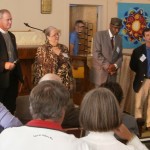 November 7, 2013 Is ALL Proselytizing UNethical and immoral?
Recent Comments
0 | Leave a Comment
"I do not know how I have not seen this article before. Wonderful to read ..."
Donna Donovan Interfaith in Prison
"David - I am not totally sure if you are the same David who said ..."
T B Interfaith as a Pagan: Assumptions
"Wow - powerful story, Sage. Thank you."
Holli Emore Blood Feud
"On the subject of cutting things out of one's life without understanding how they are ..."
Sage Blackthorn Blood Feud
Browse Our Archives
Follow Us!

Self-Initiation as a Solitary Practitioner: What...
John Beckett
Related posts from Wild Garden