A Thousand Years from Now 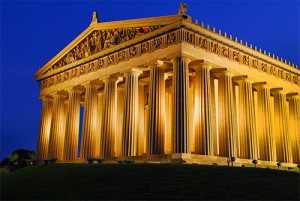 I want to start the year off on a positive, forward-looking note and imagine what our work here will produce in the distant future. There’s this fantasy that tumbles around in my head from time to time of a world in which Pagan temples of various sorts are common. Because it’s my fantasy, the temple takes the shape of one to honor the gods of Ancient Greece and there’s a sanctuary with altars and various statues, office space for the priests and priestesses, a daycare, and a small library. We have potlucks and celebrate the holidays together in a space that is dedicated to worship. The kids do crafts (paper plate dramatic masks), the adults talk about the myths, we sing, we eat, we share, we talk. Maybe there’s a school, Athena Academy, where we teach our kids Pagan values like democracy, inquiry, and excellence. Our football team might not be great, Odin High beats us every time, but our archery team is one of the best in the state. School is out for things like Anthesteria and the Lesser Mysteries. People say things like, “Hey, what are you going to do for Lenaia this year?” and “Nothing big, just taking the kids out to a movie. Wanna come over later? We’re having a wine tasting.” and “I’ll pass. We’re touring a winery this year.” Big interfaith meetings have Wiccan, Heathen, Hellenic, and Druid representatives (among others) and there are a number of seminaries and university programs geared toward the multitude of Pagan faiths. It’s a very rich and detailed fantasy, but not a wholly impossible one.

Maybe this reality is a hundred years away, maybe a thousand, but I fully believe that the work we are doing now as interfaith clergy and laity is the foundation upon which future generations can build such thriving cultures that are rich and valuable members of the local and global communities. Even in the past fifteen years, I’ve seen Paganisms become more visible and more integrated into the mainstream. The VA has approved the pentacle and Mjolnir as “emblems of belief” on grave markers, we’ve seen Wiccans and other Pagans portrayed more positively in the media, there are the beginnings of scholarly works, there’s Cherry Hill Seminary’s good work, and Pagan books are being re-classified as “religion” instead of “occult.” We have a long way yet to go, but every time I talk to someone that didn’t know people worship the Theoi and every time the Women of Faith advocates for equality as an inclusive and unified front, we bring a light to the world that helps make practicing Paganisms safer and less weird in a bad way. Each of us is working to help others understand that Pagans are people with jobs and families and mortgages and successes and failures. We’re people just like any other people.

The alliances we now forge among our fellow persons of faith will persist through the generations if we keep stressing the importance of this work. When there’s a zoning issue for the temple, I have faith that our Muslim neighbors will stand with us as we stood with them. When Athena Academy opens its doors, I’m confident the UU congregation will help us battle legislation that denies tuition vouchers to us and not to the local Christian schools. Maybe a Jewish friend will support the formation of a Pagan Studies degree at a nearby university or in the more immediate future, maybe a Quaker friend will stand up for someone who is being harassed at work. There are a thousand small victories and a number of large ones to be had in the years between now and my fantasy, but the possibility of that kind of open and normal practice of my religion and that of my fellow Pagans gives me hope. That daydream might be just a flight of fancy, but it fuels my optimism toward a better future for all of us.

Compassion and friendship are at the core of interfaith work and it’s not limited to those who go to the big meetings or who have the gumption to help form and go to the small meetings here in the Bible Belt (I’m looking at you, Holli Emore). By living as though our beliefs and practices are normal, by extending compassion toward those who do not share our faiths, and by forming friendships outside our own faith groups, we can all be ambassadors working toward a future where we can forget to send Solstice cards to each other, even though they were on sale at the grocery store. One day, and may the Fates weave it soon, Athena Academy will be real and maybe, just maybe, I will have my inflatable Dionysus yard ornament.

January 23, 2014 MLK Day and Your Average Wiccan Priestess
Recent Comments
0 | Leave a Comment
Browse Our Archives
get the latest from
Pagan
Sign up for our newsletter
POPULAR AT PATHEOS Pagan
1