It’s undeniable that the Internet has been instrumental in the growth of Paganism.  It provides the isolated access to the information they crave whether it be about Paganism or anything else.  Granted, it can be difficult to sift the good from the bad, but as time marches on, I think that we have found ways to share information about our traditions and practices that has had, for the most part, a positive influence on our community.  Similarly, we have had great success with podcasts and audio recording. The low-bar of entry to the online realms has been a boon to us (and others) who might lack the resources (financial and otherwise) to break into more traditional forms of media like television and radio.

These sorts of media and others have been used by other religions, perhaps most obviously in the form of televised Christian ceremonies on TV for those who may not be able to join their congregation in person.  A solid argument could be made that some of these broadcasts had two goals:  to preach and to raise funds.  I suspect that at least some of those funds went to pay for the broadcast time—perhaps one reason we’ve seen the rise of channels devoted to the sharing of one specific message.  These financial barriers have left Pagans and other religious (and non-religious) minorities in a lurch, and the few attempts by Pagans to produce online, TV-style news outlets or programs have largely fallen short of the funding that they would require.,

But, some are trying to leverage the Internet to create a similar sort of religious broadcast.  Last night, I had the chance to chat with Shea Morgan from St. Louis, Missouri about her work with both geographically and electronically connected people.  This article is a bit of a departure from our usual work here at the Wild Garden in that it doesn’t specifically have much to do with interfaith work.  That said, I’ve seen work like Shea’s cropping up in a variety of places not limited to Witchcraft and Wicca, and her techniques may benefit anyone from any religion or lack thereof.  With luck, they will.

Shea Morgan has been developing and facilitating public rituals in the St. Louis area for some time now focusing on the Sabbats.  With a familiar basis in Witchcraft, she and others have developed rites that mesh shamanic and ceremonial practices honoring deities from various pantheons from the Morrighan to Hekate to White Buffalo Woman.

I encountered Shea in the Facebook group for the Rite of Her Sacred Fires, a ceremony honoring Hekate performed by people all over the world on the full moon in May.  Organized by Sorita d’Este and the Covenant of Hekate, this rite has been translated into over 20 languages and has been performed since 2010.  In 2013, Shea and her local group performed the rite together for the first time.  Coincidentally, that was also the first year that I was a part of it as well.

In the spirit of that rite, Shea decided this year to begin to expand her work to include online participation.  These rituals, distributed both by Facebook and one her blog, are made available to online members in advance of the scheduled date to allow time for some interaction between participants and Shea.  She told me that most of the participants are familiar with the ritual structure, but are sometimes confused about how to be involved remotely.  These concerns include the exact timing for the ceremony, especially considering some members are in far-flung time zones, as well as technical details like how to construct an altar, how much they can change the ceremony, etc.

When the time comes, Shea constructs an altar of her own.  This altar is kept throughout the rite and afterward to provide time for all online members to participate as a way to hold space for those members even if they can’t be together all at the same time.  Unlike her public rituals, Shea does not meet up with other St. Louis community members to perform these rituals.  This is to make sure that the online members don’t feel like they’re a second-class of participants only included in addition to the primary ritualists working together.

Shea has received wonderful feedback from online members.  Some of them had never really had the opportunity to work with others in a group setting before, and even though there is obviously a difference between getting together with an in-person group of people for religious observances, the chance to be a part of something greater than ourselves is, at least for some, a strong reason to be a part of a religious community.  In fact, Shea’s been told that the online members have a sense of community despite each individual still performing the rite separately, solitarily.

Shea has helped to facilitate four of these online rituals so far starting this past January like this one for New Year’s.  Roughly seventy-five people attend/perform them online.  Most of the online members have found the group via the Facebook group, Spirit’s Edge: a Seeker’s Salon, or via the Facebook Event pages for each online event.  Going forward, Shea is working to further enhance and grow the group’s website, to increase the online presence for the group, and for a new tradition that meshes shamanic and ceremonial practices that she calls “shamonial.”  All this is in addition to the usual social networking components that help glue an online organization together like YouTube channels, the aforementioned Facebook infrastructure, and–of course–Twitter!

Shea’s work in St. Louis continues apace, too.  Her group opened and closed the St. Louis Pagan Picnic last year and will have a booth at the event this year selling merchandise and sharing information about the Spirit’s Edge Shamonial Tradition.  Proceeds from the booth will go to help with the necessary bureaucratic paperwork that comes with the start of a new religious tradition but also to benefit the Foundation for Shamanic Studies, which has been instrumental in helping Shea build a greater understanding of shamanic practices.

While talking with Shea, I was reminded of the Solitary Druid Fellowship.  The SDF operates a very similar sort of organization to Shea’s though they focus primarily on rites around the solstices, equinoxes, and the cross-quarter days while Shea offers rituals on other dates of the year.  Admittedly, I personally would like to take these sorts of things grow until they could include participation of members throughout the world in real-time, and while Shea has considered this sort of thing, she’s worried that it would make participation more difficult (e.g. members in other time zones–especially on other continents–might find participation at convenient North American times problematic).

That said, I think this sort of work is likely inevitable.  Skype, Google Hangouts, and other video conferencing tools are becoming easier to use and more powerful every day.  I have personally been a part of rituals that take place on the hour every hour in the different USA time zones, so I can imagine the case where this sort of thing is expanded to include others elsewhere throughout the world.  Maybe the day is not so far off where a group of people get together online and call quarters starting in Montana, moving to Virginia, Texas, and California creating not just a ceremonial representation of north, east, south, and west but a geographic one as well. 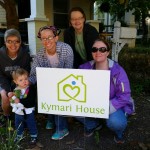 May 27, 2014 The Whole Community
Recent Comments
0 | Leave a Comment
"I do not know how I have not seen this article before. Wonderful to read ..."
Donna Donovan Interfaith in Prison
"David - I am not totally sure if you are the same David who said ..."
T B Interfaith as a Pagan: Assumptions
"Wow - powerful story, Sage. Thank you."
Holli Emore Blood Feud
"On the subject of cutting things out of one's life without understanding how they are ..."
Sage Blackthorn Blood Feud
Browse Our Archives
Related posts from Wild Garden