What About the Children?

Patheos issued a great writing prompt last year; how do we pass on our faith to our children? As half of an interfaith marriage, both members of minority religious communities, let me take this opportunity to express how insanely LOADED this question usually is. I have heard this question a hundred times, each colored with its own preexisting assumptions. More often than not when somebody close to me asks this question, it’s more important to address the question they’re NOT asking.

When my father, a first generation Pagan, asked me “How are you going to raise the children?”, the more important question he was really asking me was“Is she going to try and make you convert?” When my father-in-law said the exact same phrase, his real question was “You understand that you’re going to raise them Jewish, right?” When my conservative Baptist mother asked me the question, her real meaning was “Will you let me teach them about Jesus?”

More often then not, I don’t even get the opportunity to go into my plans for my potential children’s education. Instead I end up trapped in a circular dance, trying to figure out what the question is actually trying to get at. In fact, there is exactly ONE person who has ever asked me that question and actually wanted to know what my ideas, ideals, and plans actually are; and that’s my wife. (Arguably the only person whose business it is in the first place!)

My wife and I met exactly two years to the day before our wedding, and had known each other for about twenty minutes before this topic came up as a tangent of a seriously FASCINATING discussion on religion. Twenty minutes into the rest of our lives, and she made it abundantly clear that her future children would be raised Jewish. Bear in mind, I had no idea that this was my future wife at the time and thus really was not concerned with this early revelation until nearly two years later.

So how can I pass on my faith to my children, when I already swore to my wife that I would raise them in the manner of her ancestors? I swore on my honor, and on my sword (literally) that I would do my best to ensure they went to Shul, learned about Jewish culture, and got their Bar and Bat mitzvahs. My one and only caveat, was that once our children are old enough to decide for themselves, that they will be allowed to make their own choices as men and women; secure in the knowledge that they will always be unquestionably accepted at home. While they are growing up, and we’re still responsible for leading them along their paths, they’ll follow my wife’s traditions. They may choose to do so for the rest of their lives, and I will never question their choices in that matter. This doesn’t mean that I won’t be passing down my own beliefs to my children.

I plan to raise good Heathen children. Let me be clear, I’m going to keep my word and raise our children to be Jewish; however I intend to try and instill the best of my own traditions values in my children. I intend for my children to grow up understanding frith, and the unwavering support and loyalty of kith and kin. I will teach them honorable conduct, regardless of whether or not modern society recognizes the value of honor. I will teach them to be self reliant, and to never stop questioning. I will teach them the value of holding their word as their bond, and the rewards of perseverance. My children may or may not ever choose to honor the Aesir and the Vanir. They may devote their lives to Judaism, following their mother into the Rabbinate. If I can instill these values, these core tenants of my belief, then I will state with pride that I have taught my children all I have to offer.

To some, it’s more important to pass down the cultural lore. Others say that the most important thing for them to pass on to their progeny, is the desire to honor their gods. The virtues I listed above are what my Heathenism means to me. If I can encourage my children to lead a life that would make their ancestors proud, I will happily count my duties as a Heathen father successfully fulfilled. 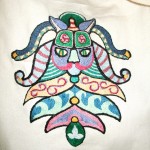