Abortion is a hard subject to talk about. Coming up with theoretical situations to illustrate a standpoint is usually not helpful because doing so fails to express the complexity of the decision whether or not to end a pregnancy. This decision, more often than not, comes with other major life-changing events and it is not only a medical concern, but a deeply spiritual and difficult ethical decision. By the grace of Artemis, I have never been faced with a pregnancy that I considered ending and I have never experience the heart-wrenching grief of miscarriage. I have two healthy girls from two pregnancies that had few problems and for this, I am infinitely grateful. Though I can’t imagine what it’s like to endure the loss of a pregnancy, I know that there can be nothing easy about it.

This is hard. Everything about this is hard. There are very, very strong feelings about the ethics surrounding abortion, often based in a person’s perception of and relationship with the divine. I’m not going to argue ethics here because I don’t feel comfortable telling any woman what is appropriate for her in her situation. It’s too complex. There are too many variables. I can’t even say whether or not I would ever choose to end a pregnancy because I’ve never been faced with that decision. I don’t know what the right answer is, if there is one.

What I do know is that there is a short list of those who need to be involved in such a difficult decision and that my state legislature is not on it. We have an amendment to our state constitution coming up that would give even more leeway to our lawmakers to restrict access to abortion. Tennessee has some of the strictest policies that protect privacy, especially in regards to medical procedures, which comes as no surprise to me. We tend to be a private people. Allowing our lawmakers to interfere in medical decisions goes against our very nature as Tennesseans. We talk to our ministers, our families, our very close friends, our doctors, and our gods, but we do not ask our state lawmakers. In spite of the “Red State” and “Bible Belt” arguments, this intense desire for privacy and non-interference holds true. This amendment is the exception to the rule and I will be voting “No” come November.

At our invitation, a representative from Planned Parenthood came to talk to our Women of Faith group this week about this ballot initiative. Laws affecting women and children are of particular concern to us and fall within the purview of our mission statement. We were asked whether we would, as a group, support a “No” vote. Now, we’re a room full of opinionated women from many different faith backgrounds and political standpoints and we won’t publicly support anything unless we have a unanimous vote. Methodists, UUs, Quakers, Catholics, Muslims, Agnostics/Atheists, Buddhists, and Pagans don’t have a whole lot of common ground, particularly not politically, but every single one of us agreed to publicly support a “No” vote. My Muslim friend, Safaa, turned to me in disbelief and told me how her faith makes exceptions for women whose health is in danger. I was a little surprised, but shouldn’t have been. Safaa’s faith is one of reason and compassion and that is how she lives her life. We were all reasonable women and many of us understand intimately what it means to be a vessel of life. Every one of appealed to compassion and reason as motivation for a “No” vote. To a woman, we said “No.”

I’m not the person to field questions about the ethics of abortion and I’m not going to answer “but what if…?” questions. I don’t know the statistics or the numbers, so I’m not going to appeal to the authority of math. I’m also not going to say whether abortion is unequivocally right or wrong because I only know what was right for the pregnancies I’ve had. I won’t appeal to ancient tradition or texts because they are not appropriate for a modern context. My very own Pagan ethics, which may differ from your Pagan ethics, tell me that one of the hardest choices a woman might ever have to make in her life should remain with her and no one else. It’s the reasonable and compassionate thing to do. 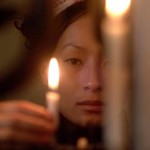 Magick IRL: Bending the Proud Necks of the...
This fight belongs to all of us. We Witches are the new...
view all Pagan blogs
What Are Your Thoughts?leave a comment
Copyright 2008-2020, Patheos. All rights reserved.