Stirring it up: Interfaith News from SC 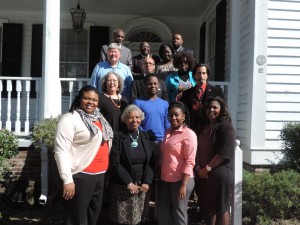 So the interfaith panel at a local American Baptist college went well, even though a student introduced me to the auditorium as the director of Cherry Hill Cemetery! One member of the panel, a Baptist minister, was clearly feeling a bit uptight, but he was polite. The facilitator, a prominent member of our city theater community and much-loved for his portrayal of Frankenfurter in many productions of Rocky Horror Picture Show, put folks on the spot by asking about sexuality. Those are the times when I love being Pagan because I can speak boldly and with confidence about my complete support of LGBT rights.

I confess I felt sad and embarrassed for my co-panelists who used terms like “lifestyle” and “love someone without loving their behavior.” Then again, the more they find themselves in such a public position, perhaps the more they will reflect on their position. At any rate, in interfaith it is not my job to dissuade people of their personal beliefs, but to show respect even when I disagree.

One gadfly in the audience came with a list of good questions, for example, about women’s reproductive choice. Fortunately, she asked them all at once, so we got to focus on the first one, about religion and the environment. One student asked us what we thought about teen pregnancy, and I responded, “Seek good prenatal care as soon as possible,” but apparently the moral implications were a hot topic on campus this spring.

I attended one more program this season and enjoyed observing from the audience. My African-American imam friend presented at the local Lutheran seminary. He showed us about ten minutes of a documentary about the beginnings of the Nation of Islam (of which he was a part at the time), after posing the question, “Why do good people get caught up in political movements like (so-called) Islamic State (ISIL)?” The answer was clear after watching just a bit of our own modern American history – when people are disempowered they seek empowerment, sometimes not seeing clearly what is the true agenda of their leaders.

Last week my Muslim colleague, a Christian colleague and I met with two full-time chaplains from the S.C. Army National Guard. Both are evangelical Christians who have learned to appreciate religious diversity and their responsibility to minister to all of their troops. One proudly told me of an Asatru guard member in his unit, and the other has visited the circle at Fort Hood. We discussed ways we can support them in caring for all the troops under their care, and they took home copies of the Cherry Hill Seminary brochure called “What Is Contemporary Paganism (for clergy and scholars of religion).”

That’s the interfaith news from South Carolina – what’s happening where you live? Please write and share your stories and questions with Wild Garden. holli @ sc.rr.com

March 11, 2015
Interfaith as a Pagan: an Intermission
Next Post

March 20, 2015 Twixt the Darkness and the Light
Recent Comments
0 | Leave a Comment
Browse Our Archives
Follow Us!

A Witch At Home - 13...
A Modern Traditional Witch
Related posts from Wild Garden