History has been happening so fast all around me the past week that I’ve barely had time to think, let alone write.  But I am in the eye of a powerful and awe-inspiring storm; good composition aside, here are some of the things I’ve heard, seen, done, or otherwise experienced. 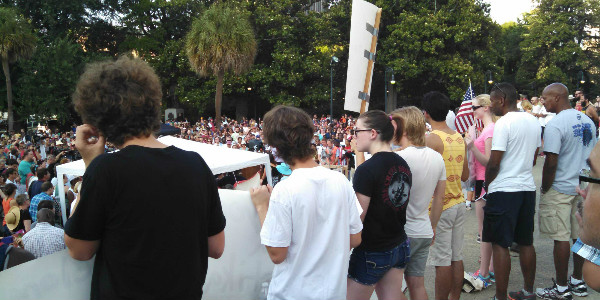 ∙    The people of Charleston – really, all of South Carolina – did the opposite of what the shooter anticipated.  We came together, in love, in pride, in humility and compassion.

∙    Many have commented on the beautiful smiles and kind hearts of the murder victims.  But we lost more than that with their deaths – we lost their life experience, their accumulated wisdom.  A 74-year-old black female South Carolinian has a lifetime of stories that we need to hear.  A man who began preaching as an adolescent and was elected to state office by his 20s had a great deal to teach us about bridge-building.  I am happy to hear the names repeated at every service the past few days, see them printed in every article, view their photos and names on television news, and I hope to hear more in the future about what wisdom they may have left behind with those who knew them.

∙    Many of you know how dismayed I have been at the rancor so commonly displayed in the Pagan community. So I was elated Sunday night to hear Pagans at a Charleston prayer vigil declare, “Blacks in Charleston have shown us how we should treat each other, how to forgive and heal.”  Amen and blessed be! 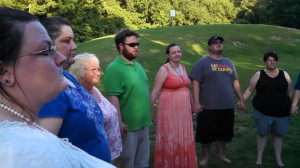 A Heathen in that circle shared this: “I did not do this, but my ancestors caused this to happen.  I am sorry, and for their mistakes and hatred I apologize.”  Another person said, “If we have not done so before, now is the time for is to begin loving each other equally.”

∙    South Carolina is like a big small town – everybody knows everybody, or so it seems.  Only eight weeks ago Senator Clementa Pinckney worked with the small nonprofit which is my “second job” (Death Penalty Resource & Defense Center) to push back some legislation we opposed.  I met him in a subcommittee hearing; he was really tall, really dark-skinned, and really friendly, so he stood out in the group.  I would not expect him to remember me, though I still have a note to myself on my desk to call him in September to ask him to be present for a gathering the Center is doing in Charleston then. He will be missed, more than any of us might have guessed a week ago.  Many of my friends and colleagues were good friends of Clem Pinckney, and of others who died.  So many parts of the web of connections now broken and tangled, so much sadness.

∙    My Muslim African-American friends are very nervous, wondering if they are next.  It’s hard to believe that the shooter grew up with any inkling that Mother Emanuel was an icon of black history. Where was he going in western North Carolina? Who was going to harbor him as fugitive? When might they emerge to carry out another act of violence?  We are not feeling hyper-vigilant yet, but it’s the shadow in the corner of our rooms.

∙    One black leader who is a close friend called me yesterday. He said, “You know, we didn’t get in this mess overnight and it’s going to take time. Before white police were shooting black men, blacks were all shooting each other.  That has to stop. My generation made a mistake by telling ourselves to let the younger ones have their own culture.  That culture has resulted in constant violence, but everyone is afraid to call it out.” 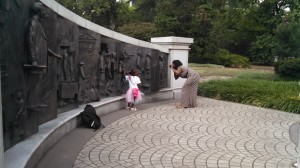 ∙    I replied by reminding him of my past frustration at feeling my support and assistance were not wanted any more because I am white.  I noted that I cannot say this publicly.  My friend replied that we are both speaking truth and it’s time to say it, but that people will not like it.  To me, it feels as if the logjam of interracial communication has been broken up by the shooting.  Blacks and whites (as if that describes everyone who lives in South Carolina, but there it is) are open to each other as never before.  Now is the time to open up the water’s flow and start moving again towards a more just society.

∙    Sunday Osireion were the guests of a small Christian church called Jubilee! which had asked us to do something in the service to observe the summer solstice.  The service was held at a lovely nature preserve, in a picnic shelter right beside the Saluda River.  Over lunch afterwards, Osireion members and guests reflected on the service.  One of us had calculated that the water streaming past us would dump into the ocean at Charleston in about 12 hours.  Another said she had been thinking of the water as carrying our love with it downstream to the people of Charleston.  Still another, new to the area, had looked at the region on Google Earth and noted that the Saluda is much darker from the satellite than is the Broad River, which it joins only about a mile down. We thought about the dark and light rivers flowing inevitably towards a better union on their journey to be joined with the ocean, with the All of the watery realm. 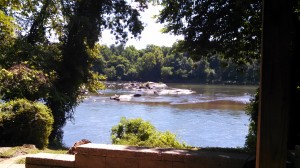 Someone also pointed out that she was very glad we had come out of the shadows to participate in a Christian service, because that is the lesson of the shootings – that we have got to start coming together.  We agreed that we don’t have to be the same, but that we do need to come together more often, get to know each other, show caring for each other, both within the Pagan world and outside of it.

∙    Now the flag is coming down. That abominable, idiotic piece of cloth which has embarrassed my own city of Columbia for 50 years.  I have never known a single person who supports display of the Confederate battle flag who is not racist.  Every time the national media purports to be telling both sides of the story, I want to scream because one side is a very tiny minority. For some reason, that minority has held sway over enough Republican legislators that the issue could not even be discussed. There is no question in any of our minds that our governor is doing this because it is politically-expedient, because it better positions her for future national politics.  Nevertheless, whatever her reasons, she is doing the right thing.

∙    The “Take It Down” rally at the State House on Saturday was moving and beautiful.  I saw diversity of many kinds all around.  I saw the much-maligned teen generation lined up on the steps with posters.  A mother was photographing her little girl beside the African American memorial on the grounds.  People were embracing, smiling, weeping. Elders went to the microphone to share their memories of many decades of working for social justice.  And for those Pagans who have said that whites are now taking down the Confederate flag to assuage their guilt – you obviously don’t live here and don’t know what you are talking about.  We are all doing this, and we are rejoicing. Together. 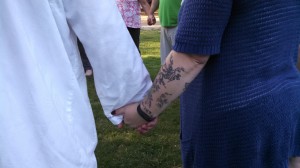 For the past four years, at every autumn equinox, Osireion has held a ritual to honor Maat, the ancient Egyptian goddess who embodied justice and balance.  We have pledged each year to continue to work for these things in the year to come. I believe we are beginning to see our prayers answered as Maat restores some small measure of balance to the people and land of South Carolina. 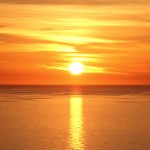 June 30, 2015 Ramadan and Remonstrance
Recent Comments
0 | Leave a Comment
Browse Our Archives
get the latest from
Pagan
Sign up for our newsletter
POPULAR AT PATHEOS Pagan
1