OK, I am going to do the unpardonable here. I am going to talk about politics for just a moment. It is, after all, election year. And elections are important because they have an impact on how our lives will be shaped during the coming years. I know, I know. We feel like we really don’t have much say in how our government runs and to an extent that’s true. But it is also true that if you don’t get out there and vote you have no voice whatsoever.

For those of us in the interfaith community, politics can work to our benefit when we have elected representatives who support religious tolerance and religious diversity. It doesn’t matter what the religious beliefs of the candidate are, where they go to religious services or even whether they practice any religion at all. What is important is that they acknowledge the right of other citizens to hold religious beliefs that are contrary to their own.

On the other hand, there are some candidates who use their religious beliefs as the basis for what they want to see happen in this country to the exclusion of those who hold to other spiritual paths. They make a point of showing just how religious they are and condemning as somehow un-American and degenerate others are who don’t share their narrow views of both religion and morality. One can hear them every night on the news trumpeting that religious diversity will be the downfall of this country. There is no room in America for those who hold different beliefs.

As a Pagan and someone who works within the interfaith community I become worried that apathy and an unwillingness to look at where our current political landscape is leading us will bring about the very sort of theocratic ghetto that we abhore in other countries. While frustration over the state of our government can lead us to want to avoid anything that smacks of politics I believe that we would be foolish in the extreme to do so. This is not the time to pretend that we are ostriches with our heads in the sand and ignore what the outcome of our indifference might be.

I am not telling anyone how to vote, but am asking that you do vote. But vote with your head. Listen to what the candidates are saying. Pay attention to the news. Get out there and speak up at town meetings if you will. But please, please, please….vote! If we remain silent in the face of religious discrimination then we have only ourselves to blame for the outcome.

Look at the picture above. Is it sunrise on a new day, or is it sunset of a dream of a society in which diversity and religious tolerance are the norm? 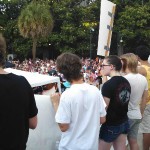 June 23, 2015 Making History at Solstice
Recent Comments
0 | Leave a Comment
Browse Our Archives
get the latest from
Pagan
Sign up for our newsletter
POPULAR AT PATHEOS Pagan
1