For the easing of pain from inflammation, Baltic Amber could be your new holistic therapy best friend. Most often, witches approach Amber like it’s a stone, a magickal ally from the mineral realms. Amber is a symbol of the Solar God, solar planetary magick, and prized for its spiritual healing, energizing, and protection from the unseen. However, Amber is actually a fossilized tree resin. Trees are the priests of the plant realm, and this sap formed the very life-blood of ancient plant world.  Those tree-priests which made Amber presided over the growing earth between 95 and 30 million years ago.

Baltic Amber brings a magickal union of mineral AND plant AND ancestral medicine through time. Witches also prize amber for the fiery, electric influence it has on the human energy system and as a psychic activator. Traditionally, Amber and Jet beads are worn in a necklace by High priests and priestesses as a reminder of our interconnection with both the living earth, and solar and lunar divine forces. Ancient Greek people noticed that when you rub a piece of amber over a cloth static electricity is generated. The Greek word for amber was “elektron.” (source) Magickally, amber remains “electric” and a living ambassador encoded with ancient earth wisdom, but that is just the tip of the magickal amber iceberg. (Source) Baltic Amber’s therapeutic properties come from the high concentration of Succinic acid it contains. This acid makes up as much as 8% of in Baltic Amber by weight, and is the true gift of healing bestowed by this old mineral friend of witches.

But what is Baltic Amber exactly?

Besides a solid stone-like substance often featured in “healing” jewelry.

Baltic Amber comes from extinct trees that once grew in the region surrounding the Baltic sea, in Europe, especially abundant in modern Lithuania. The resin found in those now-extinct trees was a lot like confier tree resin. The resinous fluid that eventually becomes amber is the tree’s blood, and what a tree uses to seal injuries in its skin and repair itself.

“…the resin would have acted as a sealant by coursing down and through the limbs and trunk of a tree, sealing off cuts to protect the tree from harmful bacteria, fungus, and other threats to its livelihood. Let’s just say that if a tree were a human, the trunk would be its epidermis and the resin would have served as its sticky band-aid.” (source)

So right there you find the very personality encoded into amber is one of sealing and healing the boundaries from the harm of microbial invaders. After these now-extinct trees died and decomposed, they left their resin behind. Over time the amber resin would become buried under the earth. For millions of years, under pressure, it would eventually fossilize and change into the dense substance we now know of as Amber. Amber is between 30 and 95 million years old. Resins younger than that are softer, and are called copal.

So, the medicine we find in the particular amber which grew from these extinct trees in the Baltic Region, then fossilized in soil of that particular environment, happen to have a high concentration of Succinic Acid, which is a natural part of many types of plant and animal tissues. It is this medicinal constituent which has been used in Europe as a natural antibiotic, anti-inflammatory, treatment for pain, and general curative for centuries.  Even before mankind knew about microbial germs, or the roles micro-nutrients play in health, the ancient peoples of Europe recognized that amber had curative powers, and used it like we’d use an antibiotic today. Modern science now knows that the “magic” constituent is succinic acid, and what that acid can do for human health. Modern Science yet again confirms the folk wisdom Europe utilized for centuries.

Succinic Acid “is very important to your body. It is used in the Krebs Cycle which is involved in the intermediary metabolic process. Another name for the Krebs Cycle is the Citric Acid Cycle. A powerful anti oxidant that helps fight toxic free radicals and disruptions of the cardiac rhythm, succinic acid has been shown to stimulate neural system recovery and bolster the immune system, and helps compensate for energy drain in the body and brain, boosting awareness, concentration and reflexes, and reducing stress.” (source)

Ancient European people wore jewelry of the the  Baltic Amber which washed upon the shores of the Baltic Sea. They also made medicines from powdered amber chips and stones. They applied amber oils to their skin to slow aging and cure sickness. Amber was burned as an incense to improve indoor air quality, and repel insects, like mosquitoes.

We can thank the Dominican Monk, Albert The Great, born in 1193, for much of this information. He was the patron saint of natural sciences, a Doctor, an Aristotelian scholar, an alchemist said to have made the sorcerer’s stone, and believed in the occult properties of minerals. He also wrote extensively on Astrology, which is pretty cool for a Catholic monk of that time! Albert called Baltic Amber Succinium and stated that it was the most effective of the leading medicines of the time. Amber tinctures were made from beer and wine.

When the plagues of the middle ages devastated Europe, amber was used for fumigation, which helped because a high content of succinic acid remains in the smoke. It was reported that church-men most exposed to the smoke of amber fumigation in plague-struck areas, never contracted the illness. (Source)

Succinic acid is now produced commercially, and it is approved for use by the United States Food and Drug Administration. There are many modern forms of usage.  However, the easiest way to utilize the healing properties of Baltic Amber, is to wear the “stone” against your skin in the form of a necklace or bracelet.  Body heat encourages the release of the succinic acid from the amber, which is absorbed slowly and consistently through the skin, and into your body’s systems. There it most noticeably acts as an analgesic and anti-inflammatory, preventing the ills caused by our increasingly toxic environment.

In the United States, this method of wearing Baltic amber “healing” jewelry became very popular with parents of babies over the past 20 years, in the form of “infant teething necklaces.” These wee, carefully knotted necklaces made for infants reduce the pain of teething, greatly reducing the tears and suffering of their little ones. With careful observation of the infant wearing the necklace while awake during the day (for safety purposes) parents find the soothing effect to be miraculous.

I’m 46 today*, and have long suffered debilitating pain and stiffness from arthritis in my lower back, inflammation around the sacroiliac joint in my hips, and scoliosis in my upper back, neck and shoulders. In my own experience, after only 24 hours of wearing a Baltic Amber necklace from Lithuania, I felt a radical reduction of the stiffness which previously caused a limited range of movement. I was quickly becoming an invalid. My pain is now reduced by at least 95%.

I’ve now worn this necklace and bracelet continuously for several months, and what was once constant debilitating pain, is now almost unnoticeable. I can live a normal, active life with minimal difficulty. The simple act of wearing a necklace changed by life entirely for the better! I do remove it to shower, and once I forgot to put the necklace back on. The next morning, I awoke to a return of terrible pain and stiffness. Just like before, I could barely pull my aching body from the bed. I clutched my neck to find the lack of my amber, and knew exactly why the pain had returned. Immediately putting it back on, it only took a day for the curative amber to ease that suffering once more. I’ll never make the mistake of forgetting my amber again! As far as I’m concerned, this is what all the stylish witches will be wearing!

Since I’ve been importing Lithuanian Amber Jewelry for sale in my witchcraft shop, I’ve heard the anecdotal stories of many friends and customers who also swear their migraines have been greatly fewer, and the pain of autoimmune disorder inflammation, and fibromyalgia pain lessened. This winter I was a caregiver for my child during both the flu and a wicked head-cold, and did not contract the viruses myself. Perhaps the necklace aided my general immune system health as well.

A trusted source of Healing Baltic Amber Jewelry is a website called “Inspired by Finn.” This link is to their testimonials page, so you can see the reactions of others like myself.

In hopes for healing,

ADDITIONAL RESOURCES, CITED FOR THIS ARTICLE:

*Happy birthday to me! I got to relax at home and write a blog today. 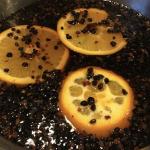