But that’s the point.

You’re not supposed to do this. But he has.

Songwriters have creative licence but has Leon Rosselson gone too far?

A Nazi soldier smashes the head of Rivka, a seven year old girl wearing her new red dress in the Vilna ghetto in 1942. An Israeli soldier fires a shell onto a Gaza beach and kills Mohammed, an eleven year old boy playing football with his cousins in 2014. In the songwriter’s dream, Mohammed and Rivka take each other’s hand and “leave this world of war” – together.

The Polish ghetto has been twinned with the Gaza Strip.

Nazis are on a parallel with Israelis.

And in life and in death, Rivka and Mohammed are together and equal.

Leon Rosselson has given us a new song that will outrage some but bring many more to tears.

But is the comparison of Rivka and Mohammed fair? Isn’t such a coupling of victims a dishonest slur against the state of Israel, a gross exaggeration, and an offence to the memory of the six million?

Hold those questions in your head while I introduce you to Leon Rosselson, England’s finest radical songwriter.

At the age of 81 Rosselson has just announced that his new album ‘Where are the barricades?’, will be his last.

It marks the end of more than fifty years of recordings that have charted the struggles between the left and the right, the rich and the poor, the strong and the weak. And, in more recent years, the struggle between Israelis and Palestinians, Zionists and anti-Zionists, and between Jews and Jews.

Leon Rosselson gained national recognition in the early 1960s through appearances on David Frost’s BBC satire show That Was The Week That Was (TW3). Over the years he’s sung with many of the greats of the 1960s and 70s English folk music scene including Martin Carthy, Roy Bailey and Sandra Kerr.

I first discovered Rosselson’s music in the early 1980s through a passionate Billy Bragg rendering of probably his most well known song ‘The World Turned Upside Down’. The song tells the doomed story of a community of 17th century English radicals called the Diggers whose attempt to ‘build a common treasury for all’ is violently crushed. Rosselson succeeds in turning the story of their defeat into a song of inspiration and hope.

Invariably Leon Rosselson delivers his songs with wit, humanity and a great deal of compassion. His best songwriting tells stories or describes emotionally charged encounters. He chooses his words with great care and sings them as a concerned, committed, chronicler of our times rather than an angry revolutionary. In fact, it’s hard to imagine this Jewish son born into a communist household in North London ever climbing barricades or storming the citadels of power. That would have been a waste of his talents anyway.

Not a nation, not a religion

If you want to understand how Rosselson’s Jewish and communist roots have informed his songwriting you can find it beautifully set out in a song called ‘My Father’s Jewish World‘.  Rosselson’s take on the Judaism he inherited from his parents is summed up in the chorus:

It’s not a nation

This Jewish Spirit is still unbroken

It’s like the fool that laughs at the dragon

All of this needs to be understood as we return to ‘The Ballad of Rivka & Mohammed‘.

Rosselson wrote the song while Israel’s 2014 Gaza assault was still underway. Mohammed was one of the more than 500 Palestinian children killed by Israeli forces during that summer. Before the new album version was recorded, Rosselson put this front room performance on YouTube:

On first hearing ‘Rivka & Mohammed’ it struck me how many political taboos Rosselson was breaking.

Through his story-telling/song-writing we see the two characters not as representatives of Jews or Palestinians but as children killed because of hatred, cruelty and the ability of human beings to dehumanise each other.

Rosselson universalises their situation refusing to allow politics and nationalism to create a divide of righteous and unrighteous dead. The point is that Jews cannot forever been seen as only and always the ‘victims’. We have shown our ability to be bringers of pain, suffering and death. In such circumstances, where should a Jew, still filled with the Jewish Spirit of our ancestors, choose to stand?

Rosselson’s song succeeds in ‘shattering the silence’ and it would be good to think that Rivka and Mohammed could ‘signal a rebellion’ against the collective denial about Israel that still grips most Jews.

It’s wrong to equate Israel with Nazi Germany and the Holocaust  in my view. Such attempts at direct historical comparisons are poor history and invariably lead to a row about anti-Semitism rather than current oppression and suffering. But if the question is: Can the hatred, intolerance and violence seen perpetrated by Nazis against Jews been seen in the behaviour of Jews towards Palestinians (with the Jewish state itself as a protagonist) then the answer is ‘yes it can’.

The essential truth is that any people in any place can become afflicted with Nazi behaviour if the circumstances are right. That ought to be the real lesson of the Holocaust. The tragedy for both Jews and Palestinians is that Zionism has created those circumstances in Israel/Palestine.

So what does Rosselson himself have to say about the song? I’m grateful to Leon for agreeing to answer my questions.

An interview with Leon Rosselson

Cohen: Your song about Rivka & Mohammed draws an equivalence between Gaza today and the Vilna ghetto in 1942. Is it the individual suffering or the political circumstances that you’re  comparing, or both?

The racism of the Nazis, dehumanising Jews (and so making them disposable), is matched by the racism of prominent Israelis and government spokesman dehumanising Palestinians, calling them ‘little snakes’, ‘two-legged beasts’, ‘drugged cockroaches’ and suggesting – as in an article in The Times of Israel – that there are times when genocide is permissible.

That’s the background. But the song is a story about two children who share a common humanity and a common fate. The key line, for me, is ‘Then each took the hand of the other’.  Given the contempt in which Zionism and Israelis hold the Jews of Eastern Europe for going passively into the gas chambers (as the myth has it), it’s not a stretch to show that this Jewish child sees – not an Israeli child – but this Palestinian child as her friend, her brother.

So the song is both personal and political.

Cohen: You must have known the song would be provocative and controversial, even outrageous, for some listeners. Was that your intention from the start or just where the creative process took you?

Rosselson: I don’t write songs to be controversial or provocative.  Any song that implies criticism of Israel is going to be seen by Israeli supporters as provocative so that really doesn’t enter my consciousness.

I wanted to express my anger and dismay at what Israel was doing in this attack on Gaza, what those who called themselves Jewish were doing to another people. I don’t think that saying directly what I think, what I feel makes for a very good song so I looked for a story that would carry what I wanted to say.  When I’d calmed down a bit, I changed the ending, omitting the curse.

Cohen: Does the ‘monster’ only represent Israel?

Rosselson: It seemed to me that it was an appropriate word for a state that uses its immense military power to crush a defenceless people. Doubtless there are other monsters in the world.

Cohen: What reactions have you had to the song as a recording and in performance?

Rosselson: I haven’t so far had any hostile response, probably because Jewish supporters of Israel don’t usually come to my concerts. Sometimes they do, particularly in America. Mostly audiences are moved by the song.  My daughter can’t listen to it without crying and it took me time to be able to sing it without openly showing emotion. It is, after all, desperately sad.

Cohen: What for you would be a good outcome for Israel/Palestine?

Rosselson: I think now there is no 2-state solution however desirable some, like Uri Avnery and, of course, mainstream politicians think it would be. It’s not going to happen. It wouldn’t anyway solve the problem (the ‘demographic’ problem, as Israelis see it) of what rights Palestinians – 1 in 5 of the population – would have in a Jewish state.

I’m against a Jewish state as I’m against an Islamic state or any state that excludes, by definition, a minority of its population. So one state with equal rights for all its citizens would be the best solution. So no Palestinian state either. Until that happens,far off into the future, the conflict will continue.

‘The Ballad of Rivka & Mohammed’ can be found on Rosselson’s final album ‘Where are the Barricades’. You can buy from his website or on iTunes. For more of his songs with an Israel/Palestine theme ‘The Last Chance’ is the album to buy. 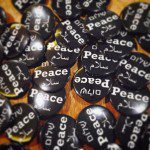