Because the Catholic Liturgy is More Evocative than the Most Graphic Film March 28, 2010 Webster Bull 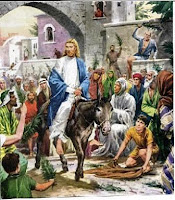 Once you love a book, you’ll seldom like the movie based on it. That’s why I am impressed with Peter Jackson’s “Lord of the Rings” films: they are surprisingly close to my own imagination of them! That’s also why I was moved by the liturgy for Passion Sunday today. Because I had seen “The Passion of the Christ” again on Friday evening, and the film pales in comparison with the liturgy. Sorry, Mel.

It helped that I experienced today’s liturgy twice: once at 8:15 as a reader of the Passion according to Luke and at 10:30 as a singer in the choir. And it probably helped that I am on the brink of geezerhood—tired of graphic violence and with a heart opened, now and then, to the presence of Christ, not in history, not up there in every bleeding pixel on the IMAX screen, but here, now, in my church, in my life, in my heart.

Christ was present at St. Mary Star of the Sea Church today. 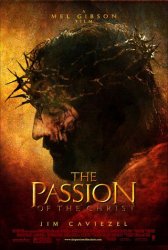 The Passion (Palm) Sunday liturgy may have been enacted in your church as it was in mine, with the priest at the rear saying the opening prayers, followed by the Gospel reading about Jesus’s entry into Jerusalem. Then there was a procession up the aisle, reenacting that moment awesome to think of, when the people who would scream “Crucify him!” only a few days later knelt and laid cloaks in the mud before Him, as He rode in. Willingly He came, knowing the destiny that was riding to meet Him. It is a vignette with so much to ponder, to digest, to be grateful for—and here it was, being enacted, incarnated in our midst: with little girls in bonnets clutching bunches of palm fronds and old serious men looking seriously on.

Even the fact that we had our frequent guest priest, Father Hennessey, at 8:15 and our pastor, Father Barnes, at 10:30 made the reality of Christ’s presence more vivid. There are always differences of presentation when you change priests: one has a deeper voice, the other speaks more quickly—like watching two different film versions of the Passion, one with James Caviezel as Christ (above), one with Max von Sydow (below). These differences are irrelevant to the story, the reality, the Presence of Christ.

Two years ago right now, I was on the verge of being received into the Church. Ferde was become my big brother and unofficial sponsor in the Church. Today at 8:15, just two years later, don’t ask me how or why, I was reading Luke’s story of the Passion with Ferde. I was reader #1, Ferde reader #2, and Father Hennessey read the words of Christ.

Then at 10:30, with Father Barnes presiding below, I was wedged into the rear left corner of the choir loft singing Isaac Watts’s “When I Survey The Wondrous Cross” with my fellow choir members.

When I survey the wondrous cross
on which the Prince of Glory died;
my richest gain I count but loss,
and pour contempt on all my pride.

Forbid it, Lord, that I should boast,
save in the death of Christ, my God;
all the vain things that charm me most,
I sacrifice them to his blood.

And so on for two more verses. Hollywood doesn’t write scripts like that. They steal them and turn them into bludgeons for the blind, deaf, and dumb, meaning you and me, brothers and sisters. When all they really have to do is to say that Jesus, knowing he faced mortal danger, rode straight toward it, and for us. It happened today, in the center aisle of St. Mary Star of the Sea Church, and probably in your church as well.

March 28, 2010
Thanks Only to the Embrace of Christ
Next Post

March 28, 2010 Because of Minor Miracles III (zzzzz)
Recent Comments
0 | Leave a Comment
"Vaya con Dios, Leonard; Rest in Peace."
AnonCollie Leonard Nimoy Explains The Origin Of ..."
"Thank you for sharing"
Andy To Break My Fast from Being ..."
"I've seen Matt Maher live four times...twice since this song was released. I absolutely love ..."
Veritas81 WYD Flashback With Matt Maher, And ..."
"Yes, and Dolan should have corrected the scandalous and wrong decison of his predecessor when ..."
sixbunnies Archdiocese of New York Health Plan ..."
Browse Our Archives
get the latest from
Catholic
Sign up for our newsletter
POPULAR AT PATHEOS Catholic
1

St. Maximos, The Will, And Universal...
A Little Bit of Nothing
Related posts from Why I Am Catholic