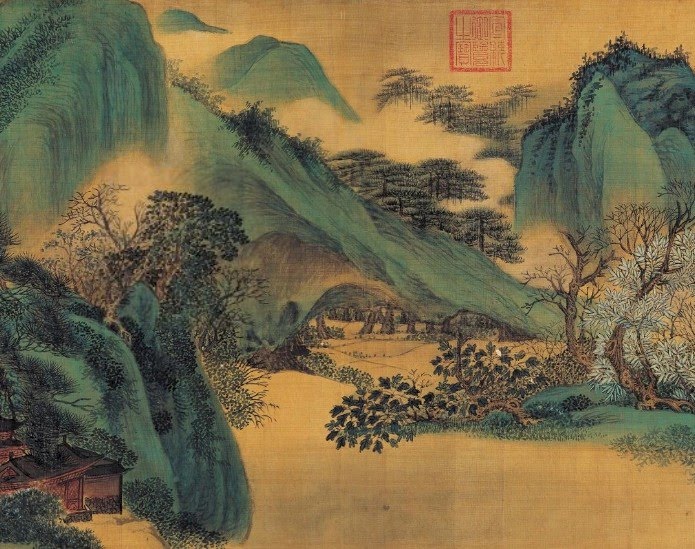 Remember me and the pleasure I get from finding things out about our faith and sharing them with you? Well, I’ve been called Mister Google around these parts. But after this find, maybe it should be Doctor Google. You be the judge.

A week or so ago I had seen an article featured on New Advent about Catholics moving beyond Belloc and Chesterton and other European authors to get a fuller sense of Catholicism’s universality. It set me to thinking and hunting for some Catholic literature originating from other cultures. In doing so, I stumbled upon the story of a Chinese painting master and poet named Wu Li.

The beautiful painting above is pane #3 from the hand scroll, Green Mountains in White Clouds. It was painted by Wu in the late 17th century during the Qing Dynasty period. Wu isn’t a lightweight in the history of Chinese painting. He is considered one of the Six Masters of the early Qing period. What, you didn’t know that? Hopefully, you will never forget it. I know I won’t.

In 1681, this master painter was baptized as a Catholic Christian, a surprising thing to do for a man of his background and origin, wouldn’t you say? But the Jesuits had come to town to bring the Good News to China. They called it the Heavenly Learning and, as I am (and many other converts to Catholicism are), Wu was captivated by the Gospel and the Church.  So much so that, eventually, he was ordained in Macao as a Jesuit priest in 1688.  He was sent in 1689 to do missionary work in Shanghai, where he died in 1718.

Here is the full citation on Wu Li from the Encyclopedia Brittanica:

Born 1632, Changsu, Jiangsu province, China died 1718; Chinese painter who was a member of the orthodox school of “literati painting” (wenrenhua) in the early Qing period.

Wu became a convert to Catholicism and in 1681 went to Macao Island (on the southeast coast of China), where, without family obligations after the deaths of his mother and wife and the marriage of his two daughters, he entered the Jesuit order. In 1688 he was ordained as a priest under the name Acunha and was posted as a missionary in Jiangsu. While Wu saw Western prints and paintings, his own paintings were entirely within the Chinese tradition and are always signed with his Chinese name. He studied under the great painter Wang Shimin and was a good friend of the painters Wang Hui and Wang Jian. Wu led a rather retiring life and cultivated the proper Confucian virtues of the ideal cultivated amateur of the literati tradition.

I did a post a few weeks back about Blessed Marie of the Incarnation. Similar to Wu, she had been a wife and mother first who eventually, after she was widowed and the kids grew up, became a cloistered Carmelite. It seems like a good idea to me too, especially nowadays when 60 is the new 40. Maybe in a “back to the future” move, Catholic orders will rethink their age requirements and alleviate shortages to vocations by recruiting (ahem) more mature folks who feel the call. In Wu Li’s case, he was 49 years old when he was baptized,  56 years old when ordained, and he died in the service of the Lord at 86 years of age. I can’t wait to meet him!

Intrigued by Wu’s story, I hunted around and found a book written about him by Professor Jonathan Chaves of George Washington University.  It is entitled Singing of the Source: Nature and God in the Poetry of the Chinese Painter Wu Li.  I just ordered a used copy of it that I found on Alibris. What follows are several of Wu’s poems found in Professor Chaves’ volume along with some of his paintings (unrelated to the poems) which I found via Google at the websites of the Museum of Fine Arts in Boston, the Metropolitan Museum of Art in New York City, the National Palace Museum in Taipei, and the gallery at Wikipedia Commons. Clicking on any of them will give you a close-up view.

This first poem may have been written shortly after his conversion, the painting is Spring Comes to the Lake,

By nature I have always felt quite close to the Way;
When done with chanting my new poems, I always concentrate my spirit.

Prior to death, who believes in the joy of the land of Heaven?
After the end, then comes amazement at the truth of the fires of hell!

The achievements and fame of this ephemeral world;
footprints of geese on snow;

This body, this shell of a lifetime of toil: dust beneath horses’  hoofs.
And what is more, the flowing of time presses man so fast:
Let us plan carefully about the ford that leads to the true source.

Wu obviously understands the Gospel message and translates it beautifully, don’t you think? He and Qoheleth, the author of Ecclesiastes, are probably getting along famously now.

The next poem is a portrait of fishermen (Chinese? or Peter, Andrew, James, and John?) and how they were transformed into “fishers of men” and providers of fish for those who mark the fast during Lent. The paintings are from close-ups of Whiling Away the Summer from the collection at the Metropolitan Museum of Art,

Song of the Fisherman

From patching rips in tattered nets
his eyes have gotten blurred;
he scours the river, does not disdain
the tiniest fish and shrimp.

Selecting the freshest, he has supplied
the feasts of sovereigns; 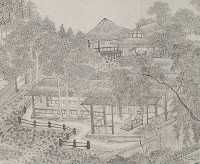 All four limbs exhausted now,
dare he refuse the work?
Spreading nets he gets confused
by water just like the sky;
song lingering, still drunk, approaches
dragons as they sleep.

Now hair and whiskers are all white,
his face has aged with time; 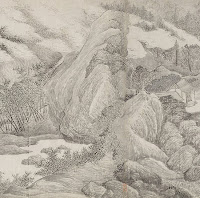 he’s startled by the wind and waves
and fears an early autumn.
Some friends of his have changed their jobs:
they are now fishers of men;
he hears compared to fishing fish,
this task is tougher still.

Of late he finds the Heavenly Learning
has come into the city.
To customers now happily add families that fast.

Not only can this guy paint, but he can paint a picture with words that gives Blake a run for his money.

This next poem, for instance, written for a friend named Kuo upon being received into the Church and receiving the Blessed Sacrament. I wish I had know about this poem when my children received their First Communion,

The gate of eternal blessings
this day has opened for you;
the light of grace and felicitation
have come to you from Heaven.

Extirpated are your former taints,
repulsed the Devil’s troops;
now you will enjoy the real bread;

formed in the Holy Womb.

How dignified! Your name has entered
the register of the righteous.
How glorious! Your heart
becomes an altar for the Lord.

I know you will prove worthy
to console the people’s yearning;
the great hall now is in need of pillars
raised on rock.

Indeed, the Church is always in need of “pillars raised on rock,” wouldn’t you agree? Here is another beautiful poem in two stanzas. The words in the first stanza are wonderful food for thought for prayer. A psalm, wrapped by a proverb, painting an image of Our Lady. The painting is Pine Wind from Myriad Villages,

Within the twelvefold walled enclosure,
at the highest spot
is the palace of the Lord
with springs and autumns of its own.

The misty fragrance is breath of flowers
where roses bloom;
the glittering brilliance is glow of pearls
where gemmed crowns reverently bow.

There in Heaven should we seek
true blessings and true joy;
in the human realm we must cut off
false strivings and false plans.

Look there where girls, so many of them,
their hair in tufts,
day after day follow behind
the Holy Mother in their play.

The second stanza calls to mind the image of the Eternal Word, the Mystery of the Incarnation, Our Lord’s Passion, and our path to Salvation in such an elegantly simple and beautiful way. The painting is Boat Trip on the River Underneath a Buddist Temple,

Before the firmament was ever formed
or any foundation laid,
high there hovered the Judge of the World,
prepared for the last days!

This single man from His five wounds
poured every drop of blood;
A myriad nations gave their hearts
to the wonder of the Cross!

The heavenly gates now have a ladder
leading to their peace:
demonic spirits lack any art
to insinuate deception.

Take up the burden, joyfully
fall in behind Jesus,
look up with reverence towards the top of that mountain
follow His every step.

Doesn’t that sound like marching orders given by a soldier for Christ? Fall in pilgrims, as we route-step march along the Way. 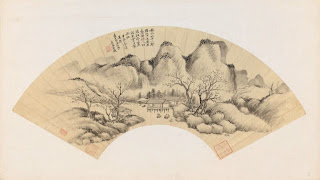 May 15, 2010
Because We Need To Lose the Training Wheels
Next Post

May 17, 2010 The Silver-Bullet Selection (Music for Monday)
Recent Comments
0 | Leave a Comment
Browse Our Archives
Follow Us!