Because These Catholic Chaplains Were Awarded the Medal of Honor 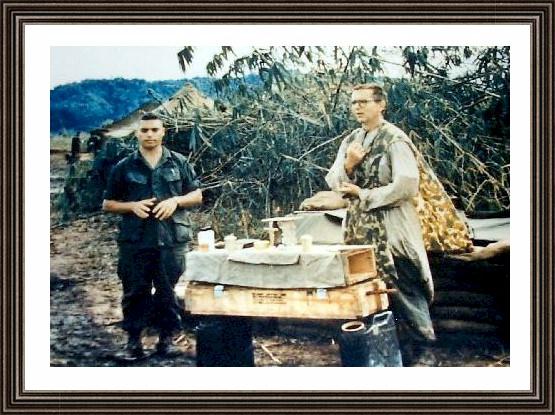 This photograph is for all of you who get really persnickety about the altar, vestments, and such ancillary things like that. This is Major Charles Watters, U.S. Army, celebrating Mass out in the field for the troops. The altar is a couple of ammo boxes sitting on top of two water cans.

Though there are no relics of saints embedded in this altar, what matters most, Our Lord and Savior, will be there with His men soon. I attended services just like this one, even when I wasn’t a Catholic. Because beggars can’t be choosers, see?

The beauty of the Mass isn’t skin deep. Even if the surroundings aren’t pleasant to the eye, God doesn’t see as man sees. And these Catholic Chaplains bring Our Lord out to His troops just as surely as King David would have been at the front leading his.

Donald R. McClarey over at American Catholic wrote a blog post recently about Catholic Chaplains as observed by Lewis B. “Chesty” Puller, a legendary Marine who is revered by all Marines. I enjoyed his post and shared it with our readers via our Facebook page. Last January, I ran across a book at a friend’s house about a Catholic chaplain who was awarded the Medal of Honor. Donald’s post prompted me to do a little digging into this interesting and surprising finding.

What follows are the citations of the three chaplains from the Vietnam War who received our nations highest award for gallantry in combat—the Medal of Honor. There are only three of them and all three of them are Catholics. One has a cause for beatification in process, and one lived to receive his award and it seems he renounced it (the only person known to have ever done so), left the priesthood, and married a former nun and is an anti-war activist.

All chaplains are special and provide a much needed service to the soldiers, airmen, sailors and Marines whom they serve. As a Marine, and a non-Catholic Christian while I served, I had a huge amount of respect for the Catholic chaplains. They just seemed more gung-ho to me. Here are stories of three of the best who ever served. 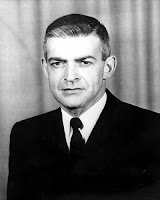 For conspicuous gallantry and intrepidity at the risk of his life above and beyond the call of duty as Chaplain of the 3d Battalion, in connection with operations against enemy forces. In response to reports that the 2d Platoon of M Company was in danger of being overrun by a massed enemy assaulting force, Lt. Capodanno left the relative safety of the company command post and ran through an open area raked with fire, directly to the beleaguered platoon. Disregarding the intense enemy small-arms, automatic-weapons, and mortar fire, he moved about the battlefield administering last rites to the dying and giving medical aid to the wounded. When an exploding mortar round inflicted painful multiple wounds to his arms and legs, and severed a portion of his right hand, he steadfastly refused all medical aid. Instead, he directed the corpsmen to help their wounded comrades and, with calm vigor, continued to move about the battlefield as he provided encouragement by voice and example to the valiant Marines. Upon encountering a wounded corpsman in the direct line of fire of an enemy machine gunner positioned approximately 15 yards away, Lt. Capodanno rushed in a daring attempt to aid and assist the mortally wounded corpsman. At that instant, only inches from his goal, he was struck down by a burst of machinegun fire. By his heroic conduct on the battlefield, and his inspiring example, Lt. Capodanno upheld the finest traditions of the U.S. Naval Service. He gallantly gave his life in the cause of freedom. 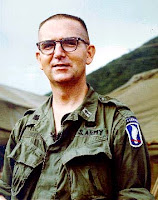 For conspicuous gallantry and intrepidity in action at the risk of his life above and beyond the call of duty. Chaplain Watters distinguished himself during an assault in the vicinity of Dak To. Chaplain Watters was moving with one of the companies when it engaged a heavily armed enemy battalion. As the battle raged and the casualties mounted, Chaplain Watters, with complete disregard for his safety, rushed forward to the line of contact. Unarmed and completely exposed, he moved among, as well as in front of the advancing troops, giving aid to the wounded, assisting in their evacuation, giving words of encouragement, and administering the last rites to the dying. When a wounded paratrooper was standing in shock in front of the assaulting forces, Chaplain Watters ran forward, picked the man up on his shoulders and carried him to safety. As the troopers battled to the first enemy entrenchment, Chaplain Watters ran through the intense enemy fire to the front of the entrenchment to aid a fallen comrade. A short time later, the paratroopers pulled back in preparation for a second assault. Chaplain Watters exposed himself to both friendly and enemy fire between the 2 forces in order to recover 2 wounded soldiers. Later, when the battalion was forced to pull back into a perimeter, Chaplain Watters noticed that several wounded soldiers were Lying outside the newly formed perimeter. Without hesitation and ignoring attempts to restrain him, Chaplain Watters left the perimeter three times in the face of small arms, automatic weapons, and mortar fire to carry and to assist the injured troopers to safety. Satisfied that all of the wounded were inside the perimeter, he began aiding the medics–applying field bandages to open wounds, obtaining and serving food and water, giving spiritual and mental strength and comfort. During his ministering, he moved out to the perimeter from position to position redistributing food and water, and tending to the needs of his men. Chaplain Watters was giving aid to the wounded when he himself was mortally wounded. Chaplain Watters’ unyielding perseverance and selfless devotion to his comrades was in keeping with the highest traditions of the U.S. Army. 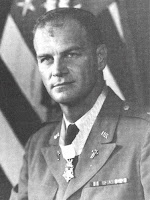 Chaplain Liteky distinguished himself by exceptional heroism while serving with Company A, 4th Battalion, 12th Infantry, 199th Light Infantry Brigade. He was participating in a search and destroy operation when Company A came under intense fire from a battalion size enemy force. Momentarily stunned from the immediate encounter that ensued, the men hugged the ground for cover. Observing 2 wounded men, Chaplain Liteky moved to within 15 meters of an enemy machinegun position to reach them, placing himself between the enemy and the wounded men. When there was a brief respite in the fighting, he managed to drag them to the relative safety of the landing zone. Inspired by his courageous actions, the company rallied and began placing a heavy volume of fire upon the enemy’s positions. In a magnificent display of courage and leadership, Chaplain Liteky began moving upright through the enemy fire, administering last rites to the dying and evacuating the wounded. Noticing another trapped and seriously wounded man, Chaplain Liteky crawled to his aid. Realizing that the wounded man was too heavy to carry, he rolled on his back, placed the man on his chest and through sheer determination and fortitude crawled back to the landing zone using his elbows and heels to push himself along. Pausing for breath momentarily, he returned to the action and came upon a man entangled in the dense, thorny underbrush. Once more intense enemy fire was directed at him, but Chaplain Liteky stood his ground and calmly broke the vines and carried the man to the landing zone for evacuation. On several occasions when the landing zone was under small arms and rocket fire, Chaplain Liteky stood up in the face of hostile fire and personally directed the medivac helicopters into and out of the area. With the wounded safely evacuated, Chaplain Liteky returned to the perimeter, constantly encouraging and inspiring the men. Upon the unit’s relief on the morning of 7 December 1967, it was discovered that despite painful wounds in the neck and foot, Chaplain Liteky had personally carried over 20 men to the landing zone for evacuation during the savage fighting. Through his indomitable inspiration and heroic actions, Chaplain Liteky saved the lives of a number of his comrades and enabled the company to repulse the enemy. Chaplain Liteky’s actions reflect great credit upon himself and were in keeping with the highest traditions of the U.S. Army.

There is one other Catholic priest that was awarded the Medal of Honor while serving as a chaplain in World War II. His name is Father Joseph T. O’Callahan, USNR. And there have been many others who served and died serving the sheep of Our Lord’s flock. There is also cause for the beatification of Father Emil Kapaun, a chaplain who served during the Korean War. May the Lord bless them and keep them and have mercy on their souls. 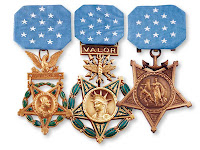 January 3, 2011
A Question For Readers: Faced With Overhearing Racist Remarks, What Would You Do?
Next Post

January 5, 2011 For All the Saints: Simeon Stylites the Elder
Recent Comments
0 | Leave a Comment
"Vaya con Dios, Leonard; Rest in Peace."
AnonCollie Leonard Nimoy Explains The Origin Of ..."
"Thank you for sharing"
Andy To Break My Fast from Being ..."
"I've seen Matt Maher live four times...twice since this song was released. I absolutely love ..."
Veritas81 WYD Flashback With Matt Maher, And ..."
"Yes, and Dolan should have corrected the scandalous and wrong decison of his predecessor when ..."
sixbunnies Archdiocese of New York Health Plan ..."
Browse Our Archives
Related posts from Why I Am Catholic