For All the Saints: Simeon Stylites the Elder

Someone who you may have never heard of in the Communion of Saints is also celebrated by the Church today. Would you believe a guy who sat atop a pillar for over 35 years? I can’t make this one up folks so I’m going to share the citation from the Catholic Encyclopedia at New Advent about my steadfast and devoted friend named St. Simeon “Stylites.”

When I first heard about the Stylites, I was taken aback.  I thought how could someone do such a thing? If my own child came to me with an idea to do something like this, would I support them? Or would I be like St. Francis of Assisi’s father and be outraged. I hope not. Come and see how this story unfolds,

St. Simeon was the first and probably the most famous of the long succession of stylitoe, “pillar-hermits,” who, during more than six centuries, acquired by their strange form of asceticism a great reputation for holiness throughout eastern Christendom. If it were not that our information, in the case of the first St. Simeon and some of his imitators, is based upon very reliable first-hand evidence, we should be disposed to relegate much of what history records to the domain of fable; but no modern critic now ventures to dispute the reality of the feats of endurance attributed to these ascetics.

Wait a second…for six hundred years there were hermits climbing pillars and living atop them? Holy renunciation! That is seriously hard corps. And think of all the folks who aided and abetted these “stylitoes.” Impressive charity, that. Tell me more about this Simeon character.

Simeon the Elder, was born about 388 at Sisan, near the northern border of Syria. After beginning life as a shepherd boy, he entered a monastery before the age of sixteen, and from the first gave himself up to the practice of an austerity so extreme and to all appearance so extravagant, that his brethren judged him, perhaps not unwisely, to be unsuited to any form of community life.

I told you he was gungy, which is Marine slang for “gung-ho.” Get outta here Simeon because you’re making us look bad! Blaise Pascal wrote, “All man’s miseries derive from not being able to sit quietly in a room alone.” Simeon didn’t have this problem.

Being forced to quit them he shut himself up for three years in a hut at Tell-Neschin, where for the first time he passed the whole of Lent without eating or drinking. This afterwards became his regular practice, and he combined it with the mortification of standing continually upright so long as his limbs would sustain him.

The whole season of Lent. When I was in the Marines, I stood for long periods during inspections. Then I went on to serve as a Marine Security Guard where standing watch for 8 hours at a time in some posts at the Embassy was just another day at the office. Simeon, I’m starting to like you. Because when I thought 8 hours was a long time, you were just getting warmed up.

In his later days he was able to stand thus on his column without support for the whole period of the fast. After three years in his hut, Simeon sought a rocky eminence in the desert and compelled himself to remain a prisoner within a narrow space less than twenty yards in diameter.

I know what you’re thinking. This guy is a showboat. But you’ve got Simeon all wrong, because he was devoted to the LORD. He didn’t change his mind about this and people noticed.

But crowds of pilgrims invaded the desert to seek him out, asking his counsel or his prayers, and leaving him insufficient time for his own devotions. This at last determined him to adopt a new way of life.

I think he prayed for a solution, and one was provided.

Simeon had a pillar erected with a small platform at the top, and upon this he determined to take up his abode until death released him. At first the pillar was little more than nine feet high, but it was subsequently replaced by others, the last in the series being apparently over fifty feet from the ground.

OK, so from nine feet up, his benefactors could throw him a jug of water, or a bunch of grapes. But it was still a little to crowded and noisy, see. So he just kept getting help to go higher. How did he pay the workers? How did he get food and water, relieve himself? We’ll see later when I take you to the movies.

However extravagant (!) this way of life may seem, it undoubtedly produced a deep impression on contemporaries, and the fame of the ascetic spread through Europe, Rome in particular being remarkable for the large number of pictures of the saint which were there to be seen, a fact which a modern writer, Holl, represents as a factor of great importance in the development of image worship.

And people kept coming out to see him, seeking his counsel, and asking him to pray for them and bless them. The accessible hermit. Here is how,

Even on the highest of his columns Simeon was not withdrawn from intercourse with his fellow men. By means of a ladder which could always be erected against the side, visitors were able to ascend; and we know that he wrote letters, the text of some of which we still possess, that he instructed disciples, and that he also delivered addresses to those assembled beneath. 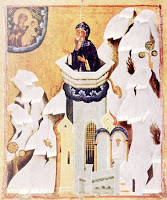 Probably with a voice trumpet or something. Can you even imagine such a spectacle today? What about sunscreen and umbrellas Simeon? What about lightning? Stop worrying will you? Have a little faith.

Around the tiny platform which surmounted the capital of the pillar there was probably something in the nature of a balustrade, but the whole was exposed to the open air, and Simeon seems never to have permitted himself any sort of cabin or shelter. During his earlier years upon the column there was on the summit a stake to which he bound himself in order to maintain the upright position throughout Lent, but this was an alleviation with which he afterwards dispensed.

I’m glad he cut himself some slack. Sheeesh! And the high and the mighty came calling, just as they did with the Desert Fathers. Centuries later, Alfred Lord Tennyson wrote a poem about him too.

Great personages, such as the Emperor Theodosius and the Empress Eudocia manifested the utmost reverence for the saint and listened to his counsels, while the Emperor Leo paid respectful attention to a letter Simeon wrote to him in favour of the Council of Chalcedon.

Why would they bother? Well, as you’ll see, Simeon was up there for quite some time. And besides, he must have been talking some sense and providing good counsel.

Once when he was ill Theodosius sent three bishops to beg him to descend and allow himself to be attended by physicians, but the sick man preferred to leave his cure in the hands of God, and before long he recovered.

What, and climb down from his perch every time he got the sniffles? Simeon was no “sick-bay commando” folks.

Talk about staying power. 36 years is not a fad folks. That is an institution. Later on, another Simeon would break his record, by another 32 years for a total of 68! And there was something of a bidding war for his relics,

A contest arose between Antioch and Constantinople for the possession of his remains. The preference was given to Antioch, and the greater part of his relics were left there as a protection to the unwalled city. The ruins of the vast edifice erected in his honour and known as Qal ‘at Sim ‘ân (the mansion of Simeon) remain to the present day. It consists of four basilicas built out from an octagonal court towards the four points of the compass.

Thanks to Wikimedia Commons for this photograph (see below) being described here. 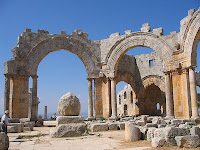 In the centre of the court stands the base of St. Simeon’s column. This edifice, says H.C. Butler, “unquestionably influenced contemporary and later church building to a marked degree” (Architecture and other Arts, p. 184). It seems to have been a supreme effort of a provincial school of architecture which had borrowed little from Constantinople.

How about watching this short film about the Stylite? It’s only 43 minutes (and change) long. It’s called Simon of the Desert and it’s the 1964 classic by Luis Bunuel. It even has subtitles, and a surprise ending.

One of the really beneficial things about being a Catholic Christian is learning about all of our brothers and sisters in Christ in the Communion of Saints. Their witness and example run the gamut of,  and make manifest, the individual ways that Christ calls us to serve Him.

St. Simeon, pray for us.

January 4, 2011
Because These Catholic Chaplains Were Awarded the Medal of Honor
Next Post

January 7, 2011 For All the Saints: Angela of Foligno
Recent Comments
0 | Leave a Comment
Browse Our Archives
Follow Us!