For Thoughts On Meekness Like These February 3, 2011 Frank Weathers 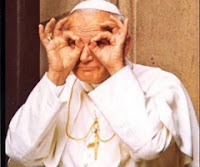 I mentioned the other day that I had saved up some Christmas gift money and used it to help me buy my friend John C.H.Wu’s book The Interior Carmel: The Threefold Way of Love. The book is John’s reflection on Christianity as The Way of Love.

John uses the Beatitudes as his guide. There are eight beatitudes and thus John’s book has eight chapters. Let me share an excerpt from his third chapter with you.

Blessed are the meek, for they shall inherit the land.

For most of my life, instead of reading the word “meek,” I read this as “weak.” Truth be told, I didn’t really know the meaning of the word “meek.” I only knew that it didn’t mean what I wanted to be when I grew up, and that word was “strong.”

Now that I am a Catholic, my mind is more open than it once was. Maybe that seems paradoxical, but be that as it may, this is true. Sometimes you just have to throw the Merriam-Webster dictionary as far away from you as you can because, though seemingly authoritative, it doesn’t necessarily have a lock on the definition of the word “meek.”

Now, let’s have a look at my friend John’s passage that I promised,

from Humor As An Ingredient of Meekness

I have often reflected that humor is an essential ingredient of Christian perfection. A humorous man laughs at himself, while a wit laughs at others. In this definition, wit is pagan, but humor is Christian. The devil may be witty, but he cannot be humorous. For there is something sharp and venomous about wit, and something mellow and kind about humor.

Recently, in reading The Divine Pity, by Gerald Vann, O.P., in a good chapter on “Meekness” I came across this striking passage:

It is important to remind ourselves often that the cultivation of a right sense of humor can be one of the forms of piety. Cultivate a sense of humor in yourself about other people and in other people about yourself. Learn to laugh rather than be vexed by peoples foibles, but learn also to laugh at your own.

It is not a virtue to be uncritical; on the contrary; but you have to be sure that your judgments are not hasty or spiteful, and that the growth of the power of criticism is accompanied by a growth in gentleness. Acquire the sort of personality that people will instinctively take their troubles too: and you will acquire it by learning to be pious and love.

Meekness is a tree rooted in humility and watered by humor; it flowers in the form of serene mellowness, and bears the fruit of the docility of the Holy Ghost.

Now we are getting somewhere! If being meek is 9/10ths having a sense of humor, then there is hope for me yet. And it helps explain why I like the works of G.K. Chesterton (so does John, by the way), St. Philip Neri, and lots of other humorous saints too. And it explains why I still gravitate to the humorous writers, yet shy away from the sarcastic ones. Why I gravitate toward the happy Catholics, and why I wonder what’s wrong with the sullen ones.

If we are disciples of the Light of the World, and if we are the salt of the earth, tasked with the mission of spreading the Gospel, which means “the Good News,” then doing so with a sense of humor and delight flat beats doing so like a fire and brimstone preacher, as sure as 19 is to 1.

Let me think of a few other ways:

Like a grand slam homerun is to a dribbling bunt right to the pitcher.

Like the fireworks Grande Finale on July 4th is to a lone, fizzling bottle rocket that goes ‘pop.’

You get the idea, right? The joyful one is way better than the alternative. Well golly Frank, that sounds great and all, but there are lots of problems with (insert inexhaustible laundry list of troubles in the world, and/or the Church, here).

You know who loves troubles? Pharisees. They eat, live, and breathe them. Throughout the whole New Testament, you never find a joyful Pharisee. Ever. Satan loves troubles too, so by extension, Pharisees were (and still are) his agents.

Saul, the best Pharisee ever? That guy had no sense of humor. Oh, he had “sense of mission” in spades, but absolutely no sense of humor. As St. Paul, though, he does markedly better, calling himself on the carpet constantly. He even zings some one-liners while standing in chains before the scary powers that were.

My friend John shows an example of Paul’s conversion from evil genius to Christian funny fall guy in St. Luke’s account of his trial before the governor Festus and King Agrippa. I mean, with names like those, how could St. Paul keep a straight face?

Paul’s defense was growing into a sermon, when Festus interrupted him by saying in a loud voice, “Paul, thou are mad; they are driving thee to madness, these long studies of thine.” Instead of being angry, Paul answered affably,

“No, most noble Festus, I am not mad; the message which I utter is sober truth. The king knows about all this well enough; that is why I speak with confidence in his presence. None of this, I am sure, is news to him; it was not in some secret corner that all this happened.”

Then addressing himself to Agrippa, he said,

“Dost thou believe the prophets King Agrippa? I am well assured thou dost believe them.” At this, Agrippa, trying to evade answering, said to Paul,

“Thou wouldst have me turn Christian with very little ado.”

“Why,” said Paul,”it would be my prayer to God that, whether it were with much ado or little, both thou and all those who are listening to me today should become just as I am, but for these chains.” (Acts 26:24-29)

But Frank, you plead, the Roman Empire put Paul to death later! Yes, but when all was said and done, wasn’t the joke really on them? The Culture of Death back in St. Paul’s time was just as sure that killing was the way to solve the Christian problem as many fear will be the case in our present day and age.

You know what I say? Lighten up! Be Meek! Have fun on the way to the executioner, preaching the Good News the whole way. It’s the Christian thing to do. Even Big Terry said so,

God save us from sour-faced saints! –St. Teresa of Avila

February 2, 2011
Candlemas (A Few Words for Wednesday)
Next Post

February 4, 2011 To Pull for the Pittsburgh Steelers (There's Even a Catholic Reason, or Two)
Recent Comments
0 | Leave a Comment
"Vaya con Dios, Leonard; Rest in Peace."
AnonCollie Leonard Nimoy Explains The Origin Of ..."
"Thank you for sharing"
Andy To Break My Fast from Being ..."
"I've seen Matt Maher live four times...twice since this song was released. I absolutely love ..."
Veritas81 WYD Flashback With Matt Maher, And ..."
"Yes, and Dolan should have corrected the scandalous and wrong decison of his predecessor when ..."
sixbunnies Archdiocese of New York Health Plan ..."
Browse Our Archives
get the latest from
Catholic
Sign up for our newsletter
POPULAR AT PATHEOS Catholic
1

Being Thankful When You Do Not...
suspended in her jar
Related posts from Why I Am Catholic