Because Christ is A Royal (Then, So Am I)

—Feast of Bl. Marie of the Incarnation
What has the Royal Wedding got to do with anything? I ask this question because of the ambivalence to the event that I noticed across the Catholic blog-o-sphere. There was either nary a mention of it anywhere, or derisiveness when it was mentioned.

What’s the story? Jealousy of the royals? Feelings of inadequacy? Bunch of rich guys…to hell with ’em? Was the prince’s red-coat stirring your loins for battles your ancestors fought long ago? You can’t stand monarchies, perhaps?

Or is it the spectacle that is made of it? The profligate waste of capital on a mere ceremony, that one blogger said could have been done for $100 in front of a humble priest? Seriously?! Judas would agree with you there. Catholics who are normally turning victory laps over pageantry, beautiful churches, sumptuous robes and incense all of a sudden announce that they aren’t fans of the Royals, etc., etc. 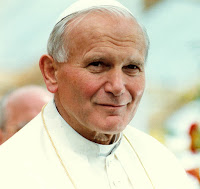 This is ironic to me because we’ll all be turning victory laps for the beatification ceremony of Blessed Pope John Paul II without batting an eyelash. It’s funny, to me at least, when blue-collar heroes like Joe Six-Pack, USMC are the ones gushing over the scriptural imagery of the Royal Wedding. It makes me want to break out a bullhorn and say, “Do you people even read the Bible?” This is the parable of the Wedding Feast folks!

Have a look at how Christ, Our King, puts it,

The kingdom of heaven may be likened to a king who gave a wedding feast for his son. He dispatched his servants to summon the invited guests to the feast, but they refused to come. A second time he sent other servants, saying, ‘Tell those invited: “Behold, I have prepared my banquet, my calves and fattened cattle are killed, and everything is ready; come to the feast.’

Some ignored the invitation and went away, one to his farm, another to his business. The rest laid hold of his servants, mistreated them, and killed them. The king was enraged and sent his troops, destroyed those murderers, and burned their city.

Then he said to his servants, ‘The feast is ready, but those who were invited were not worthy to come. Go out, therefore, into the main roads and invite to the feast whomever you find.’ The servants went out into the streets and gathered all they found, bad and good alike, and the hall was filled with guests. But when the king came in to meet the guests he saw a man there not dressed in a wedding garment.

He said to him, ‘My friend, how is it that you came in here without a wedding garment?’ But he was reduced to silence. Then the king said to his attendants, ‘Bind his hands and feet, and cast him into the darkness outside, where there will be wailing and grinding of teeth.’ Many are invited, but few are chosen.

I showed up to the wedding feast yesterday. I found the ceremonial wedding garment (humility), put it on, and then enjoyed the show. No, Joe Six-Pack, USMC doesn’t follow every shread of news about the Royal Family in the United Kingdom. But I can see the imagery of the Bride of Christ, and the Groom Himself all throughout the event.

Jesus is a Royal. Have you forgotten? And even though you wouldn’t have known it to look upon Him when he was on his thirty-three year mission to save the world, I’ve got news for you. You’ll know it when you meet Him the next time.

And haven’t you heard what the Holy Spirit said through St. Paul?

For all of you who were baptized into Christ have clothed yourselves with Christ. There is neither Jew nor Greek, there is neither slave nor free person, there is not male and female; for you are all one in Christ Jesus. And if you belong to Christ, then you are Abraham’s descendant, heirs according to the promise. (Galatians 3:26-27)

Oops. Yes, staring right back at you in the mirror is another Royal. You’ve been given a peerage, and now you have to live up to it. Gulp! It’s hard to acknowledge that, but it is true. It’s exactly what the first lines of yesterday’s wedding homily made clear. “Be who God meant you to be and you will set the world on fire.” St. Catherine of Siena doesn’t pull any punches either.

Like in the parable of the wedding feast above, the world was invited to a wedding feast yesterday. “Some ignored the invitation and went away,” and then the losers like me were invited too. That is how Grace operates. It’s unearned. You could get all wrapped up in feelings of inadequacy in realizing that you didn’t deserve to be invited, or you can just be grateful for being invited at all, go, party, and bask in the glow of it all. And then, get back to the business of bringing others to the Feast.

Because here’s something else His Majesty, Our King said that might help us understand our calling as Royals,

Which is why our first pope would go on to say,

But you are “a chosen race, a royal priesthood, a holy nation, a people of his own, so that you may announce the praises” of him who called you out of darkness into his wonderful light. (1 Peter 2:9)

That, as my friend Forrest Gump would say, is about all I have to say about that.

I’m with the Archbishop of Westminster on this one!

April 29, 2011
For the Royal Wedding Homily From Our Anglican Brethren
Next Post

May 2, 2011 Jesus Goes Mainstream II (Music for Mondays)
Recent Comments
0 | Leave a Comment
"Vaya con Dios, Leonard; Rest in Peace."
AnonCollie Leonard Nimoy Explains The Origin Of ..."
"Thank you for sharing"
Andy To Break My Fast from Being ..."
"I've seen Matt Maher live four times...twice since this song was released. I absolutely love ..."
Veritas81 WYD Flashback With Matt Maher, And ..."
"Yes, and Dolan should have corrected the scandalous and wrong decison of his predecessor when ..."
sixbunnies Archdiocese of New York Health Plan ..."
Browse Our Archives
get the latest from
Catholic
Sign up for our newsletter
POPULAR AT PATHEOS Catholic
1

Pope Francis Did NOT Say EWTN...
Biblical Evidence for Catholicism
Related posts from Why I Am Catholic