Because the Proof of Ayn Rand’s Pudding, Is In the Eating

Because the Proof of Ayn Rand’s Pudding, Is In the Eating April 7, 2011 Frank Weathers 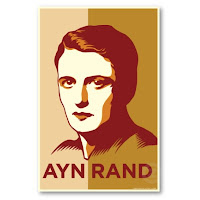 About a month ago, I wrote a wee post around a television interview Mike Wallace did with Ayn Rand back in 1959. I just as easily could have used an interview she did later on. Same story, same selfish pseudo-philosophy.

You see, being selfish is easy and being a Christian is hard. And being really, and truly Christian is almost never even attempted.

So why am I posting this now? A reader sent me the following story from the current issue of Salon Magazine about a family’s real life experience with Ayn Rand’s Objectivist ideal, taken to it’s literal extreme. An Objectivist Fundamentalist? Lord, have mercy!

How Ayn Rand Ruined My Childhood: My Dad Saw Objectivism As a Logical Philosophy to Live By, But It Tore My Family Apart
by Alyssa Bereznak

My parents split up when I was 4. My father, a lawyer, wrote the divorce papers himself and included one specific rule: My mother was forbidden to raise my brother and me religiously. She agreed, dissolving Sunday church and Bible study with one swift signature. Mom didn’t mind; she was agnostic and knew we didn’t need religion to be good people. But a disdain for faith wasn’t the only reason he wrote God out of my childhood. There was simply no room in our household for both Jesus Christ and my father’s one true love: Ayn Rand.

You might be familiar with Rand from a high school reading assignment. Perhaps a Tea Partyer acquaintance name-dropped her in a debate on individual rights. Or maybe you’ve heard the film adaptation of her magnum opus “Atlas Shrugged” is due out April 15. In short, she is a Russian-born American novelist who championed her self-taught philosophy of objectivism through her many works of fiction. Conservatives are known to praise her for her support of laissez-faire economics and meritocracy. Liberals tend to criticize her for being too simplistic. I know her more intimately as the woman whose philosophy dictates my father’s every decision.

What is objectivism? If you’d asked me that question as a child, I could have trotted to the foyer of my father’s home and referenced a framed quote by Rand that hung there like a cross. It read: “My philosophy, in essence, is the concept of man as a heroic being, with his own happiness as the moral purpose of his life, with productive achievement as his noblest activity, and reason as his only absolute.” As a little kid I interpreted this to mean: Love yourself. Nowadays, Rand’s bit is best summed up by the rapper Drake, who sang: “Imma do me.”

Dad wasn’t always a Rand zealot. He was raised in a Catholic family and went to church every week. After he and my mother got married in 1982, they shopped around for a church. He was looking for something to live by, but he couldn’t find it in traditional organized religion.

Then he discovered objectivism. I don’t know exactly why he sparked to Rand. He claimed the philosophy appealed to him because it’s based solely on logic. It also conveniently quenched his lawyer’s thirst to always be right. It’s not uncommon for people to seek out belief systems, whether political or spiritual, that make them feel good about how they already live their lives. Ultimately, I suspect Dad was drawn to objectivism because, unlike so many altruistic faiths, it made him feel good about being selfish.

Needless to say, Dad’s newfound obsession with the individual didn’t pan out so well with the woman he married. He was always controlling, but he became even more so. In the end, my mother moved out, but objectivism stayed. My brother and I switched off living at each parent’s house once a week.

It was odd growing up, at least part-time, in an objectivist house. My father reserved long weekends to attend Ayn Rand Institute conferences held in Orange County, California. He would return with a tan and a pile of new reading material for my brother and me. While other kids my age were going to Bible study, I took evening classes from the institute via phone. (I half-listened while clicking through lolcat photos.)

Our objectivist education, however, was not confined to lectures and books. One time, at dinner, I complained that my brother was hogging all the food.

“He’s being selfish!” I whined to my father.

“Being selfish is a good thing,” he said. “To be selfless is to deny one’s self. To be selfish is to embrace the self, and accept your wants and needs.”

It was my dad’s classic response — a grandiose philosophical answer to a simple real-world problem. But who cared about logic? All I wanted was another serving of mashed potatoes.

Look, I’m a realist like St. Thomas Aquinas OK? Just as many horror stories about growing up in a religious household can probably be written. Many children will turn away from whatever their parents are teaching them. It seems to be the natural order to rebel when you’re young.

However, to teach our children Christianity in the Catholic Tradition is as far from teaching them a prideful, self-absorbed, self-as-idol Objectivism as the letter A is to Z. The former is Truth while the latter is a train wreck. Sadly,  I have Christian friends who oddly look up to Ayn Rand because they like the 10% of what she has to say about Libertarian freedoms (Laissez-faire economics, for example) vs. the 90% of the rest of her horror show ideals.

For an antidote, may I suggest they spend some time with the Compendium of the Social Doctrine of the Church, and Pope Benedict XVI’s encyclical Caritas in Veritate? Not to mention the lives of the Saints. Or maybe I should introduce them to my friend Blaise Pascal.

But first, just start with a close reading of Our Lord and Savior’s Sermon on the Mount.

April 8, 2011 For Your Lenten Friday Night at the Movies V
Recent Comments
0 | Leave a Comment
"Vaya con Dios, Leonard; Rest in Peace."
AnonCollie Leonard Nimoy Explains The Origin Of ..."
"Thank you for sharing"
Andy To Break My Fast from Being ..."
"I've seen Matt Maher live four times...twice since this song was released. I absolutely love ..."
Veritas81 WYD Flashback With Matt Maher, And ..."
"Yes, and Dolan should have corrected the scandalous and wrong decison of his predecessor when ..."
sixbunnies Archdiocese of New York Health Plan ..."
Browse Our Archives
Follow Us!

Abp. Viganò: Fanaticism, Extremism, and Conspiratorialism
Biblical Evidence for Catholicism
Related posts from Why I Am Catholic

Suffering: No Why’s, No Theodicies, but a Crucified...
On Tracy’s Fragments, Chapter 4, Christianity and Suffering Suffering looms large in...

Ever After
"Make a fist." A little strip of rubber at the elbow tied...
view all Catholic blogs
What Are Your Thoughts?leave a comment
Copyright 2008-2020, Patheos. All rights reserved.