To Train My Family to Pray, And Lead Them By Example

To Train My Family to Pray, And Lead Them By Example April 28, 2011 Frank Weathers 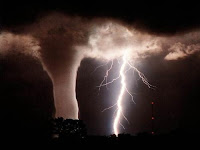 Joe Six-Pack, USMC here. Yesterday my family put into practice prayers that they learned a long time ago. You see, a line of storms was forecast to hit our area, and everyone took them seriously.

Wednesday nights are when many parishes hold their C.C.D. classes for the kids. That’s an abbreviation for Confraternity of Christian Doctrine classes. The teachers called the house and informed us that due to the weather forecasts, classes for tonight would be cancelled.

Remember when you were in school and classes were cancelled due to snow? That is the kind of jubilation that my kids reacted with when we received this news. Cart-wheels and high-fives all around! And then Joe Six-Pack crashed the party with, “Well, since C.C.D. is cancelled, we’ll be praying the Rosary tonight.” Dad can be such a killjoy at times, ’tis true.

But I’m a Dad, and I have always been a Christian Dad, the one who taught my children to pray the Our Father even when I knew it only as “the Lord’s Prayer.” And now that I’m a Catholic Dad? Well, I’m not quite the Emeril Lagasse of prayer, but I’ve definitely cranked it up another notch. Bam! Or as we say it around these parts (East Gallilee, er I mean Tennessee), Bhayum!

How scary was the weather? Well, let’s just say that my 15 year old son sent me a text before I headed home from work with the following words: “Be safe Daddy.” I don’t think he’s called me “Daddy” for three of four years now. Scary weather forecasts will do that to a kid, and even to an adult. “Abba” is “Daddy” as I recall, and Our Lord even pointed that out to the Apostles.

I texted him back that I would be fine, because it was early yet and the cells hadn’t arrived. When I got home, I noticed my wife had prepped some chicken drumsticks for grilling. So I did the only thing that a man could do: I put on my poncho and grilled them. A man has got to eat, and he has to feed his family. Pretty basic stuff, right? I even had a beer while I was cookin’. My motto is “one beer, per man, per day” and I don’t let the weather interrupt that. Ever.

So, we were finishing up our dinner, which we ate in the formal dining room because the kitchen table was covered with stuff from our pantry. Remember the stairs I built? Sheesh, that seems like a hundred years ago. They climb over the pantry below, and as I built them with oak treads, with nails, glue, and screws to boot, I know the safest place in the house is right underneath the stairs. The pantry, then, doubles as the stronghold of Casa del Weathers. My wife had made more room for us in case we needed to hit the stronghold. Smart woman! That’s why I married her.

As I was helping myself to another drumstick and more cheese mashed potatoes, I asked my youngest son to get me a beer. My daughter informed me that she had already gotten me a beer earlier and I said, “yes, but today I’ll have another, because “the Extreme” is thirsty tonight. See, we watched the movie Twister a few weeks back to prepare for Spring. I had joked about being “the Extreme” while I was grillin’ too. “I betcha didn’t know your Dad was ‘the Extreme,'” I said, but she shot back “oh yes I do!” Then the phone rang, the CCD teacher called to scrub the mission for tonight, and the jubilation and high-fives reined supreme.

That is, until “the Extreme” said, “Well, since C.C.D. is cancelled, we’ll be praying the Rosary tonight.” The natives were not happy. But I outrank them, see, and when an extra hour gets freed up to practice our faith, I grab it. And then the first storm cell made it’s presence felt, and we headed into the strong-hold, just like in the movie Thunderheart. And trust me, hearts were thundering in the pantry at this point.

We didn’t have time to grab our rosaries, but after years of training, we didn’t need them. And that is the point of this post. In the Marines, we trained constantly in peace-time and during war-time. Training is non-stop; “it ain’t training, unless it’s raining.” And when we were in the pantry, the prayer training we had been practicing all these years, paid off. Did our prayers stop the storm? Stop tornadoes from ripping our house apart? I don’t know. Many who prayed lost their homes and businesses in Alabama.

No. The praying did what nothing else can do. It provided comfort and courage during the worst storms we have ever lived through. Did you see the news that some atheists are calling for atheist chaplains to minister to them in the military? I’m not sure what good that would do, or in what way they can be ministered to by atheist chaplains. “Worried are you? Here you go lad, read a little of Cormac McCarthy’s The Road, and be of good cheer.” Hmmm.

Here is what we did instead. In the stronghold, we held hands and we prayed the Our Father, the Hail Mary, and the Glory Be. And when the storm abated, we sang the Gloria and left our refuge. Twenty minutes later, we went right back in and did it all again. We even said the Nicene Creed, after I botched the Apostles Creed (rookie!). We sang the Gloria again though, which we all know by heart.

At one point, I noticed that my daughter had stopped praying with us. She started listening to the ruckus that was going on outside instead. I noted the signs of panic in her eyes, and her tears started flowing as her fears rose up. As the boys and my wife kept praying loudly, I reached for her hand and said,

She squeezed my hand, and mentally and physically she backed away from the precipice of fear and panic, and joined the rest of us in saying our prayers. She had faith in me, see, just like she did when I helped her learn to swim in the deep end of the pool, or ride her bicycle without training wheels.

But the faith isn’t in me, but in the example I was setting. And she knows that now more than ever. Her faith, our faith, is in the Lord. And we cried out to Him in the Our Father, the Hail Mary, and the Glory Be. And no matter what happened that night to our property or our bodies, the importance of why we pray was apparent to her, and to all of us. We cried out to our Heavenly Daddy, “Abba Father!” because we need His compassion and peace when our courage is tried.

We were like the sleeping disciples who woke up on the boat in a storm on the Sea of Galilee (Mark 4:34-41). We cried out to the Lord, like they did, and our souls were comforted. I’m not going to go into much more detail. Suffice it to say, “you play the way you practice.” And when it comes to prayer, when you practice it during the peaceful times, and you or you children think it is a waste of time, or boring, and even pointless, keep at it.

Because when the trying times arrive, as they most certainly will, all that peacetime prayer training will pay off.

April 29, 2011 For the Royal Wedding Homily From Our Anglican Brethren
Recent Comments
0 | Leave a Comment
"Vaya con Dios, Leonard; Rest in Peace."
AnonCollie Leonard Nimoy Explains The Origin Of ..."
"Thank you for sharing"
Andy To Break My Fast from Being ..."
"I've seen Matt Maher live four times...twice since this song was released. I absolutely love ..."
Veritas81 WYD Flashback With Matt Maher, And ..."
"Yes, and Dolan should have corrected the scandalous and wrong decison of his predecessor when ..."
sixbunnies Archdiocese of New York Health Plan ..."
Browse Our Archives
get the latest from
Catholic
Sign up for our newsletter
POPULAR AT PATHEOS Catholic
1

Is “The Chosen” Realistic to the...
Messy Inspirations
Related posts from Why I Am Catholic