For Books By Dead Jesuits, Like The Catholic’s Ready Answer 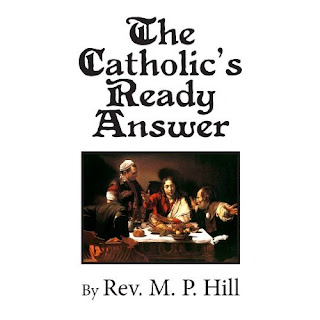 Yesterday I published the Music for Mondays post early. Therein, I commented that Catholicism is so deep and so wide, that ideas for writing about it will never be exhausted. But the fact of the matter is, folks like the shiny new stuff better than the old, moldy stuff already sitting in the libraries of the world.

Not me. I’m the weirdo contrarian, remember? And you know what else? Lately I’ve been bumping into fantastic stuff written by long dead Jesuit priests whom I’ve never heard of. My buddy Blaise Pascal hated the Jesuits with a passion. He’s not alone with that opinion either. But I like them. Guys like Wu Li, SJ for example. And François Nepveu, SJ. Remember Wilhem Wilmers, SJ, torpedoing Ayn Rand’s “originality?” And who could forget Henry Morse, SJ?

Oh, folks love John Hardon SJ, for example, and I picked up a copy of his The Question and Answer Catholic Catechism at a used book sale. I haven’t cracked it open yet though. At the same sale, I also picked up Mission and Grace, Volume 1 written by Karl Rahner, SJ, and We Hold These Truths: Catholic Reflections on the American Proposition, by John Courtney Murray, SJ. I’m reading that selection currently and frankly, it is top notch. I promise to post on it soon.

Aside for Fr. Hardon though, I have never heard of any of these guys. It turns out they are modern giants of the Society of Jesus. See? I’ve got a lot to learn. I hadn’t heard of the Jesuit who wrote this neat little book I just added to the YIMCatholic Bookshelf either.

It’s called, The Catholic’s Ready Answer: Popular Vindication of Christian Beliefs and Practices Against the Attacks of Modern Criticism , and looking over it I can say that it will be very useful even to Catholic of today. It was written by Michael P. Hill, SJ and started off as an English translation of a German book written by Franz X. Brors, SJ. Sure, it was published in 1914, but seriously, the modernist tenor of that time was very similar to modernist thoughts encountered nowadays. Don’t believe me? Just check the contents:

AGNOSTICISM > An Agnostic Query—”Why trouble ourselves about matters such as Gods existence, of which, however important they may be, we do know nothing?” (Huxley)

THE BIBLE AND MODERN THOUGHT Objection—The Bible is for many reasons deserving of veneration, but it is quite out of harmony with modern thought. The science, the aspirations, and the general point of view of the modern world are at the opposite pole from the contents of the Bible.

EUGENICS An Accusation—Every human being should love his kind, and a love of his kind should awaken in his breast an interest in the future of his race. The improvement of the race is the object of eugenics, and a want of sympathy with the present eugenic movement betrays either selfishness or an unenlightened conservatism.

HELL Objection—God is good and merciful; but a good and merciful God would not condemn a soul to eternal torments; therefore the eternity of hell is a contradiction of our belief in His goodness and mercy.

MARRIAGE A SACRAMENT, Ultra-Protestant View— “Marriage is an outward, material thing, like any other secular business. Marriage, with all that appertains to it, is a temporal thing and does not concern the Church at all, except in so far as it affects the conscience.”—Luther

See what I mean? The whole book is full of great, modern, controversial, questions and answered briefly from the viewpoint of Catholic tradition. If nothing else, it will get you jump started on learning more about the faith. Here are several examples for you to try out: Thoughts on Tolerance and Tradition.

An Accusation. —Tolerance is the first duty of the citizen as regards religious matters; but “the Roman Catholic Church, if it would be consistent, must be intolerant.”—Tschackert.

The Answer. —According to Christ’s teaching, the first duty of a man living in a community is not tolerance, but love of his neighbor. A pharisaical doctor of the law once “asked Him, tempting Him: Master, which is the great commandment in the law? Jesus said to him: Thou shalt love the Lord thy God with thy whole heart, and with thy whole soul, and with thy whole mind. This is the greatest and the first commandment. And the second is like to this: Thou shalt love thy neighbor as thyself. On these two commandments dependeth the whole law and the prophets” (Matt. xxii. 35-40).

Justice and love are the two first duties of a man to his fellow-men. Tolerance is nowhere mentioned in the law. Mere tolerance does not go far enough. The Catholic Church does not merely tolerate her erring brethren She loves them with a divine charity—and that is more than tolerance. “Tolerance” is the catchword of genuine liberalism, which manages to put up with an obnoxious fellow-citizen, but knows nothing of charity.

But a distinction must be made in the matter of tolerance. Catholics are not intolerant of the erring, but toward their error there can be no such thing as tolerance. We can not compromise with error. What is false we can not call true, any more than we can call black white. When, therefore, the Catholic Church combats error and champions truth, she only follows the example of Christ and does what every right-thinking man will acknowledge to be just.

Dogmatic tolerance is self-contradiction. How can a Church that professes to be a teacher of truth say to the thinking world: “If you believe in the Trinity, in the divinity of Christ, and in the sacrament of Penance, well and good. If you don’t believe in them—again well and good—for I can’t be intolerant”? A Church which is the custodian of revealed truth can not compound with error; and any church—no matter what elements of truth it may retain, or what good it may do to men—any church which is seen to throw the mantle of a false charity over all vagaries of opinion within its pale is proved thereby not to have the hall-mark of Christian orthodoxy. In this connection the Catholic Church stands quite alone—and is thereby proved to be the one faithful eustodian of the doctrine revealed by Christ.

TRADITION AS A RULE OF FAITH

Objection. —Tradition can not be a source of true knowledge. There is nothing so unreliable as an old story that has passed from mouth to mouth and is subject to change at every telling. Even written documents are not safe from alteration. Every new copy made is likely to contain fresh errors.

The Answer. —Many who urge this objection are believers in Christianity; and yet what guarantee can be had for the truth of Christianity except in reliable tradition? Perhaps such guarantee is furnished by the Bible; but how can we know that the Bible is the word of God save by tradition?

Doubtless there are matters of secular interest about which neither writing nor tradition can afford any security from error; but there are also matters regarding which all fear of error is reasonably absent. No sensible man doubts about the existence of such historical characters as Csesar, Napoleon, or Luther. So, too, in the religious domain, there is a body of truth which is sealed as such by the continuous and unfailing witness of God’s Church; and what is this but tradition?

The Gospels can be proved to be genuine and reliable historical documents. And it may be proved from the Gospels that Christ, who was sent from on high, established an infallible Church—a fact which is plain from His having commissioned the apostles to preach the Faith to all nations and from His having declared that whosoever would not believe them would be condemned (Matt. xxviii. 19, 20; Mark xvi. 15, 16). The Church as represented by the apostles must be infallible, for otherwise no one would be condemned for not accepting the apostolic teaching. Now the Pope and the other bishops are the successors of the apostles; and they must be supposed to teach with the same infallible authority as the apostles, for otherwise we are forced to the very unchristian conclusion that Christ must have meant that all authoritative teaching should cease with the apostles! It follows that once the Pope and the bishops proclaim anything to be a truth of the Faith, it must infallibly be such.

Now tradition is nothing else but the continuous and uninterrupted teaching of God’s Church. God has it in His power to provide for the continued infallibility of His Church—just as of old He provided for the preservation of the writings of the evangelists and the other sacred writers from errors of fact and of doctrine.

In the Catholic Church there is every possible guarantee that the tradition on which Catholics rely is not of a loose, haphazard sort, containing a large admixture of hearsay and legend. The communion of all parts of the Church with the Apostolic See of Peter and Peter’s successors has been the one great source of unity and continuity of teaching in the Church. The decrees of the Popes, and of councils presided over by the Popes, are written in broad characters on the pages of history; but, even if there were no such record of them, the unfailing continuity of the Church’s life makes her a witness to apostolic truth in every succeeding age. It is to Catholic tradition as thus understood that Protestants owe such elements of pure Christianity as they retain in their several creeds.

Have a look at the rest of the book over on the YIMCatholic Bookshelf.

July 10, 2011
Stuff I Heard This Weekend (Music for Mondays)
Next Post

July 11, 2011 Because it is Only Rational That One Should Submit to Guidance
Recent Comments
0 | Leave a Comment
Browse Our Archives
Follow Us!