Would You Believe for the Fallible Facepalm? 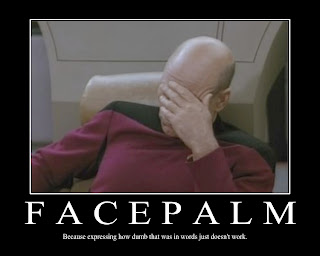 So we were driving to Mass this past Sunday, like we’ve done every Sunday since forever. Listening to the radio, with the kids riding in the back, something prompted my wife and I to start naming off the Seven Sacraments.

We named six of them pretty quickly, especially Matrimony, which I had just been discussing as we pulled out of the driveway. Baptism, my wife called out. Check! Confession, or Reconciliation was called out. Check! Holy Orders. Check! Anointing of the Sick. Check! And then we ran over the list again.

“What’s missing kids?”, I asked while piloting us on to our destination. We ran through the the short list of the Sacraments we had named so far and noted we had come up with five. My wife chimed in with Confirmation as number six. I gave the kids a pass on that one, as none of them have reached the age for Confirmation yet.

I’m really embarrassed to say that for a number of minutes, maybe 3-5(!) we were having trouble coming up with the seventh Sacrament. My wife, the cradle Catholic, and I ran through the list, aloud, and counting on our fingers the Sacraments we had enumerated so far. And then, after driving under the overpass after exiting the freeway, the missing Sacrament hit me like a ton of bricks. “The Blessed Sacrament, the Eucharist!” I exclaimed doing a face palm while stopped at a red light.

Actually, I called it a “face plant,” but my oldest son corrected me by saying, “Dad, that’s what happens when you fall on your face in front of everybody.” Of course, that is what I did, but even if he didn’t realize he was being merciful, I took it gladly and said, “I meant facepalm,” and I did my best impersonation of Captain Picard’s version you see above.

The memory of the scene haunted me for the rest of the drive to our parish. I was thinking, how could you forget the Body and Blood of your Lord and Savior? The “source and summit of the Christian life,” Frank, in case you forgot. There I was, quizzing the kids on why when Catholics get married, we do so in the Church and with a Mass. “So Jesus will be present to bless your union.” And yet, here I was forgetting his Real Presence in the Sacrament that we celebrate at Mass every Sunday, and every day for that matter?

The memory of this episode came welling up in my mind again this morning when I came across a blog post about how some Catholics have an aversion to remembering Jesus, and the central place He has in our Faith. It feels weird even writing that, because it is so obvious, as Mary Kochan makes it plain in her post.

But given that even I was at a loss for a bit, the episode above leaves me sympathizing with those who sometimes can’t see the forest for the trees. Or in the case of the Vine, sometimes we get lost among the branches. Jesus is the Alpha and the Omega, the Beginning and the End. His mother points us to Him, as do all the saints. The Mass is all about Him, as is the liturgy. He died for our sins, and showers us with His grace. And, ahem…He instituted the seven Sacraments.

Now, speaking of things I’ve misplaced in the last 5 minutes, has anyone seen my coffee mug?

July 27, 2011 For Thoughts Amid the Storm (A Few Words for Wednesday)
Recent Comments
0 | Leave a Comment
Browse Our Archives
Follow Us!