Coming Soon to a PBS Channel Near You

Coming Soon to a PBS Channel Near You August 15, 2011 Frank Weathers 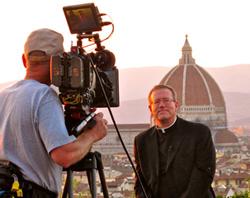 Catholicism. And you thought Ken Burns’ documentaries are good? This is going to be best series shown on PBS ever!

“I want the series to go out beyond the walls of the Church,” he said in an Aug. 10 interview. “That’s why we’re so happy it’s going to be on public television.”

Set in 50 locations in over 16 countries, the series examines major themes within the Church such as the person of Christ, the mystery of God, the Virgin Mary, Saints Peter and Paul, the “missionary thrust of the Church,” the liturgy and the Eucharist, prayer and spirituality and the saints, Fr. Barron said.

In the episode on the Virgin Mary, for instance, the crew traveled to the Holy Land, France, Mexico and “around the world to see where the Marian faith shows up.”

“The approach I used,” he said, “was just to go to places around the world that visually show the themes I’m talking about.”

Fr. Barron said that the series comes at time when the U.S. is going through what he believes to be “the darkest period in the history of the American Catholic Church,” and that the “wrong” people are telling the story of what the Church actually is.

He pointed to the secular media’s depiction of the Church “as the place where the sex abuse scandal happened,” a narrative that he finds “so tiresome and counterproductive.”

“I think Catholics from the inside have to tell a much richer, broader, fascinating story,” Fr. Barron said, stressing the importance of not allowing the Church to be “reduced to the sex abuse scandal.”

He noted that during challenging times in Church history, the saints “tended to come forward in the times of crisis and bring things back to their evangelical basics.” Go read the rest.

Check your local listings, and set your DVR’s! Here’s a teaser for you too,

Episode One is about a dangerous man, indeed. A Savior for all mankind!

There is also a book as well as DVD’s.

August 16, 2011 For Letters to Sons Like These by St. Stephen, King of Hungary
Recent Comments
0 | Leave a Comment
"Vaya con Dios, Leonard; Rest in Peace."
AnonCollie Leonard Nimoy Explains The Origin Of ..."
"Thank you for sharing"
Andy To Break My Fast from Being ..."
"I've seen Matt Maher live four times...twice since this song was released. I absolutely love ..."
Veritas81 WYD Flashback With Matt Maher, And ..."
"Yes, and Dolan should have corrected the scandalous and wrong decison of his predecessor when ..."
sixbunnies Archdiocese of New York Health Plan ..."
Browse Our Archives
get the latest from
Catholic
Sign up for our newsletter
POPULAR AT PATHEOS Catholic
1