For Letters to Sons Like These by St. Stephen, King of Hungary

For Letters to Sons Like These by St. Stephen, King of Hungary August 16, 2011 Frank Weathers 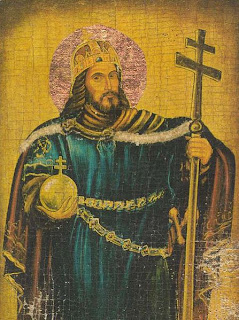 “My boy, at present you have the fun and I do the work; but your labors are on the way.”

Now, that sounds like something I would say. Today is the Feast of St. Stephen of Hungary, who wrote the words you see above. What follows are a few excerpts from letters he wrote to his son Emeric (who also was canonized on the same day in 1083). St. Stephen is known as the first Christian king of Hungary, and his life is celebrated there with due pomp and pageantry yearly on August 20th.

After learning of him from the good folks at Universalis this morning, I found excepts of his “Admonitions” in an unpublished thesis titled Notes On Parental Advice in the Middle Ages  by George Valentine Kendall. I promptly added them to the YIMCatholic Bookshelf. First, take a look at this long sentence in the foreword to the ten letters to Emeric,

Since I perceive that all things, founded at the nod of God and disposed by his most manifest preordination, both in the spaciousness of the sky and in those most spacious climes of earth, do subsist and thrive wholly in accordance with the rationality of intelligence; and since I am sufficiently aware that all things granted by the grace of God for the use and dignity of this life – to wit: kingdoms, consulates, dukedoms, counties, pontificates and all other authorities, are ruled, defended, divided and joined together, partly by divine precepts and regulations, partly by legal, partly by juridical, partly by civil, and by the counsels and advices also of nobles and of those advanced in age; and since I know for a certainty that all classes of the world, everywhere, of whatever authority they be, do instruct, counsel and advise not only their retainers, their friends and their servants but also their sons; therefore, most amiable son, companion in this life, it irks me not to prepare for you lessons, precepts, counsels and advices whereby you may embellish the character of your own life and of that of your subjects, in such time as, most high God willing, you shall reign after me.

Maybe Blaise Pascal was taking lessons on long sentence structure from this guy! You don’t have to be a royal though to see the worth of writings such as these being left to our children, not to mention to posterity. “Ich bin ein Ungar!” or is that “Magyar vagyok!?”


And now for the excerpts, which are really timely given our coming election cycle in the United States.

Excerpts from the Admonitions of St. Stephen, King of Hungary, to his son Emeric.

“They (the various nobles) are the champions of the kingdom, the defenders of the weak, the conquerors of enemies, the enlargers of monarchies. They, my son, are your fathers and brothers. Of these, truly, you should reduce none to servitude, nor call any slave; they should serve you as soldiers not as slaves, rule all of them without anger and pride and envy, peacefully, with humility, gently, holding ever in your memory that all men are of one condition; and that naught elevates, save humility; and nothing casts down, save pride and envy.

If you are peaceable then you will be called a king and a king’s son, and you will be loved by all the knights. If you are choleric, proud, envious, disinclined to peace, and if you stick up your neck above counts and princes, without doubt the strength of the military will be the weakness of the regal authorities, and they will betray your kingdom to the aliens.

Fearful of this, direct the life of your companions with the rule of virtue, that captured by your love, they may inoffensively adhere to the kingly authority, and that your realm may be wholly at peace.Than these doctrines no noble could ask more liberal, no king more efficacious. 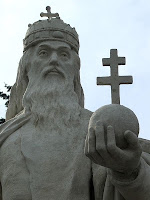 Hearken to this, my son; if you wish to possess the honor of kingship, love justice: if you wish to be master over your own soul, be patient. Whenever, my very dear son, a cause deserving condemnation comes before you, or some one accused on a capital charge, be unwilling to deal with it impatiently or to resolve with an oath to punish him – which course of action must be weak and unstable, inasmuch as foolish vows ought to be broken – or to decide the question yourself, lest your regal dignity be dishonored by the usurpation of inferior business, but rather send business of this sort to the judges, to whom it has been committed because they decide the case according to its own law.

Fear to be judge, but rejoice to be and to be called king. Patient
kings rule, but impatient ones tyrannize. When, however, something comes before you which it befits your dignity to judge, with patience and mercy or pity judge it, that your crown may be laudable and seemly.

Concerning the Reception of Foreigners, and the Support of Strangers.

In strangers and men from abroad there is such great utility that it can be held worthy the sixth place in regal dignity. Why did the Roman Empire first grow, and why were the Roman kings exalted and glorious, except because many noble and wise men congregated there from diverse regions? Rome, in truth, would be a hand-maiden to this day, if Eneades had not made her free.

For as strangers come from diverse regions of the provinces, they bring with them diverse languages and usages, and diverse learning and arms, all of which not only adorn the royal palace and render magnificent the court, but also abash the arrogance of aliens. For a kingdom of one tongue, or of one custom, is weak and fragile.

Wherefore I bid you, my son, support those persons with a good will, and treat them fairly, that they may prefer to continue with you rather than to live elsewhere. For if you destroy what I have built up or strive to disperse what I have gathered together, without doubt your kingdom will suffer the greatest damage. Lest that be, augment your kingdom daily, that your crown may be held august by all.

Ancestors ought to be imitated, and sons ought to obey their parents. My customs, which you see to befit the kingly dignity, follow them without the fetter of any uncertainty. For it is a hard thing for you to maintain a kingdom of this geographical position, except you show yourself an imitator of the usage of kings who have reigned before. What Greek would rule Latins with Greek customs? Or what Latin would rule Greeks with Latin customs? None. On this account, follow my usages that you may he held eminent by your own people and praiseworthy among foreigners.

On the Importance of Your Catholic Faith

My dearest son, if you desire to honor the royal crown, I advise, I counsel, I urge you above all things to maintain the Catholic and Apostolic faith with such diligence and care that you may be an example for all those placed under you by God, and that all the clergy may rightly call you a man of true Christian profession. Failing to do this, you may be sure that you will not be called a Christian or a son of the Church.

Indeed, in the royal palace, after the faith itself, the Church holds second place, first constituted and spread through the whole world by His members, the apostles and holy fathers, And though she always produced fresh offspring, nevertheless in certain places she is regarded as ancient. However, dearest son, even now in our kingdom the Church is proclaimed as young and newly planted; and for that reason she needs more prudent and trustworthy guardians less a benefit which the divine mercy bestowed on us undeservedly should be destroyed and annihilated through your idleness, indolence or neglect.

My beloved son, delight of my heart, hope of your posterity, I pray, I command, that at very time and in everything, strengthened by your devotion to me, you may show favor not only to relations and kin, or to the most eminent, be they leaders or rich men or neighbors or fellow-countrymen, but also to foreigners and to all who come to you. By fulfilling your duty in this way you will reach the highest state of happiness. Be merciful to all who are suffering violence, keeping always in your heart the example of the Lord who said: “I desire mercy and not sacrifice”.

Be patient with everyone, not only with the powerful, but also with the weak. Finally be strong lest prosperity lift you up too much or adversity cast you down. Be humble in this life that God may raise you up in the next. Be truly moderate and do not punish or condemn anyone immoderately. Be gentle so that you may never oppose justice. Be honorable so that you never voluntarily bring disgrace upon anyone. Be chaste so that you may avoid all the foulness that so resembles the pangs of death.

All these virtues I have noted above make up the royal crown and without them no one is fit to rule here on earth or attain to the heavenly Kingdom.

Tragically, St. Stephen’s son Emeric died in a hunting accident, and predeceased his father. The infighting over who would succeed him troubled him for the rest of his days. Upon his own death, St. Stephen was buried alongside his son.

Ludwig von Beethoven composed an overture in honor of this saint and king. Here it is played beautifully by the Motif Orchestra conducted by Chun-Lung Hsu. I bet St. Stephen got a kick out of this performance.

St. Stephen of Hungary, pray for us!

More on St. Stephen can be found here and here on the YIMCatholic Bookshelf.

August 17, 2011 The Rainbow (A Few Words For Wednesday)
Recent Comments
1 Comment | Leave a Comment
Browse Our Archives
get the latest from
Catholic
Sign up for our newsletter
POPULAR AT PATHEOS Catholic
1

Can the Latin Mass Restrictions Heal...
Femina Ferox
Related posts from Why I Am Catholic