About This Blog (And Blogger) in 1000 Words or Less 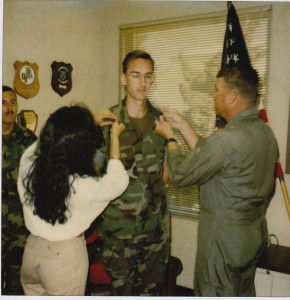 I became a Catholic when I was confirmed at the Easter Vigil in the year of Our Lord, 2008. I was baptized, though, when I was 10 years old in a Non-denominational Christian church located in my hometown. With my family, I attended regularly (pretty much if church was open, we were there!) until I graduated from high school and joined the Marine Corps at the age of 17.

Unchurched (sorry Mom!) for roughly 9 years, when I was 26 I married a Catholic girl in the Church and attended Mass with her pretty regularly (yes, we skipped Mass sometimes!) for the next 18 years. I flunked out of RCIA my first go around back in 1990, and I didn’t get interested again until I retired from the Marines and moved back to my hometown.

Once back on my home turf, see, my plan was to kick my family’s (my wife, three children, and a dog) Catholic habit by proving to her that the Church’s teachings were wrong through researching Church doctrines and history. Guess how that turned out? From the Harvard Five-Foot Shelf of Books I picked up cheap at a library fundraiser, I met the apologetic works of Blaise Pascal, and Thomas à Kempis’ Imitation of Christ. Then I read The Seven Storey Mountain, by Thomas Merton. Coupled with a minor miracle, or two, I felt called to join the Church and hustled into the RCIA program in the Fall of 2007.

I started reading all I could about the Church, the saints, Catholic history, etc. I had started praying the Liturgy of the Hours and began attending Mass daily during my lunch hour. It was in the Fall of 2009 when I was pointed towards YIMCatholic from either Patrick McNamara’s blog, or Deacon Greg Kandra’s blog (I don’t really remember which one), and I enjoyed what I had found to read here.

I was a fledgling Catholic myself and I had started poking around in the blog-o-sphere looking for kindred spirits. You know, guys like me who had been Protestants once and who had become Catholics. I knew there were a few of us around, because I had found Francis Beckwith’s story in the Washington Post, when I was considering the unheard of idea (to me anyway) of converting to Catholicism. And I had learned that Anthony Blair, the former Prime Minister of the UK, was converting to Catholicism too in the same year I was. And as it turns out, that is when Webster Bull, the founder of this blog, had joined the Church as well.

I had e-mailed him saying that I enjoyed his blog and that if ever I could help him out, I would be glad to do so. I didn’t think anything would come of it, really. Sometimes my comments weren’t even published ( the nerve!), but I had sent him a few things I thought he would find of interest and that was about all I figured would result from my e-mailing him.

And then on Thanksgiving Day, he asked me to share my story. That first post hit the blog on November 28, 2009 and thanks to the grace of God, I’ve been here ever since. I never really thought I would be, you know. Writing my conversion story wasn’t my idea of a good time. It never, ever occurred to me to start my own blog, for example, and if Webster wouldn’t have asked, I would not be here now.

I had no idea that a little less than a year later, Webster would no longer be here blogging away with me (he now blogs at Witness). On other fronts, I had no idea that he would have invited Allison Salerno to join us, or that she too would leave for her own corner of cyberspace as well (she now blogs at Rambling Follower). Nor had it ever occurred to me that one day I might be the only person still writing here at all. Gulp!

The fact of the matter is, I don’t know why I was called to join YIMCatholic as Webster’s first partner. Aside from term papers and essays in college, I had never written a word for publication in my life. But called I was, and that calling is what keeps me here sharing my experiences, as well as what I have learned, unearthed, or discovered about the Catholic Faith that I think you may appreciate, enjoy, or find comfort in.

So to all of you, I say thanks for having me, and for taking a few minutes out of your day to stop by and visit here. And I want to especially thank my wife, with whom I shared Webster’s initial request and who has steadfastly supported my writing efforts here. I pray that I am able to continue serving the Lord in a manner that I hope He finds favor with. I also pray that you may find your visits here to be, as St. Anthony the Great would say, profitable:

For often (Anthony) would ask questions, and desired to listen to those who were present, and if any one said anything that was useful he confessed that he was profited.

Soon, my wife and I will celebrate our 22nd wedding anniversary. Besides working, and blogging, I am the father of three children. They keep me busy between helping them with their homework, and attending their athletic and musical events at school. They also constantly hear me tell them to clean up their rooms, do their best in school, and for the boys, tuck in their shirts. Nowadays, I work as an assistant in the county archives where I live. Aside from my career in the Marine Corps, between periods when I was on Active Duty and serving in the Reserves, I graduated from UCLA, worked briefly as a stock broker, then worked in business logistics on the transportation side of the house, moving up the ranks from dispatcher to manager of a private/for-hire fleet of trucks.

Any questions? Ask away.

October 13, 2011 Welcome to the HMS YIMCatholic Open House
Recent Comments
0 | Leave a Comment
"Vaya con Dios, Leonard; Rest in Peace."
AnonCollie Leonard Nimoy Explains The Origin Of ..."
"Thank you for sharing"
Andy To Break My Fast from Being ..."
"I've seen Matt Maher live four times...twice since this song was released. I absolutely love ..."
Veritas81 WYD Flashback With Matt Maher, And ..."
"Yes, and Dolan should have corrected the scandalous and wrong decison of his predecessor when ..."
sixbunnies Archdiocese of New York Health Plan ..."
Browse Our Archives
get the latest from
Catholic
Sign up for our newsletter
POPULAR AT PATHEOS Catholic
1

A Virus of a Film: A...
Steel Magnificat
Related posts from Why I Am Catholic