Harry S. Truman, Mammon, and Déjà Vu, All Over Again 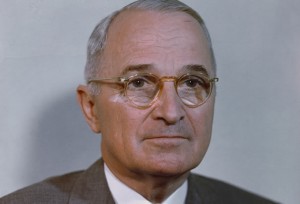 My favorite Old Testament book is Ecclesiastes. The inspired writer goes by the name of Qoheleth, which means “teacher” or “preacher.” I like Qoheleth because he has seen it all, and he isn’t afraid to tell us that we aren’t as great as we think we are. You may recall that he is the one who reported that “there is nothing new under the sun.”

What I share below is Exhibit A for the proof of that statement, from perhaps a messenger for Qohelth, by a voice from the past in the history of our great Republic. They are words from a speech Truman gave in December of 1937, when he was a freshman senator. I found them in a book that is available on-line called Plain Speaking: An Oral Biography of Harry S. Truman, compiled by Merle Miller in 1971.

It reads like a transcript between the interviewer (Mr. Miller) and the President. Take a look at the déjà vu moment below, which takes place during a discussion about Supreme Court Justices that segues over to “big business.”

Note: Try not to get all hepped up for my scalp because A) Truman was a Democrat, or B) he was a Freemason, okay? Just enjoy the replay from the broken record of our fallenness. 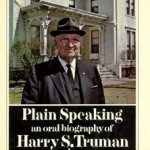 Did you in general agree with Justice Brandeis’ philosophy?

Oh, yes. Very largely yes. He was one of the great Justices. He and Oliver Wendell Holmes were my favorites. And Justice Brandeis and I were certainly in agreement on the dangers of bigness, and my goodness…I cannot…I have often wondered what Justice Brandeis would think of these great combines of business now. He wouldn’t have liked it. Of that I am sure, and neither do I.

I’m not sure the word “conglomerate” was in general circulation in 1961; it certainly was not in Harry Truman’s vocabulary, and he would have despised it, both the word and the idea. We will come to what Mr. Truman thought about the Pentagon.

Mr. President, I’ve been told that you made a largely forgotten speech on the ﬂoor of the Senate during your ﬁrst term in which you blasted big business.

There were. I’ve got them. There were two speeches, and they are in one of the books here.

The speeches were in a collection of Mr. Truman’s speeches. One was delivered in June, 1937, and it said in part:

Some of the country’s greatest railroads have been deliberately looted by their ﬁnancial agents. Speaking of Rock Island reminds me that the ﬁrst railroad robbery was committed on the Rock Island in 1873 just east of Council Bluffs, Iowa. The man who committed that robbery used a gun and a horse, and he got up early in the morning. He and his gang took a chance of being killed, and eventually most of them were killed. The loot was $3,000. That railroad robber’s name was Jesse James. The same Jesse James held up the Missouri Paciﬁc in 1876 and took the paltry sum of $17,000 from the express car.

About thirty years after the Council Bluffs holdup, the Rock Island went through a looting by some gentlemen known as the “Tin Plate Millionaires.” They used no guns, but they ruined the railroad and got away with seventy million dollars or more. They did it by means of holding companies. Senators can see what “pikers” Mr. James and his men were alongside of some real artists.

In the speech Senator Truman delivered on the ﬂoor of the Senate in December, 1937, he said in part:

One of the difﬁculties as I see it is that we worship money instead of honor. A billionaire in our estimation is much greater in the eyes of the people than the public servant who works for the public interest. It makes no difference if the billionaire rode to wealth on 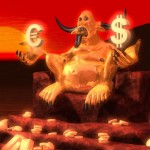 the sweat of little children and the blood of underpaid labor. No one ever considers the Carnegie libraries steeped in the blood of the Homestead Steel workers, but they are. We do not remember that the Rockefeller Foundation is founded on the dead miners of the Colorado Fuel Company and a dozen other performances. We worship Mammon.

Until we get back to the fundamentals and return to the Giver of the Tables of the Law and His teachings (ed. Sounds like Mason-speak for God), these conditions are going to remain with us. It is a pity that Wall Street with its ability to control all the wealth of the nation and to hire the best brains of the country has not produced some statesmen, some men who could see the dangers of bigness and of the concentration of the control of wealth. Instead of working to meet the situation, they are still employing the best law brains to serve greed and selﬁsh interest.

People can only stand so much, and one of these days there will be a settlement. We shall have one receivership too many, one unnecessary depression out of which we will not come with the power still in the same old hands. I believe this country would be better off if we did not have sixty percent of the assets of all insurance companies concentrated in four companies. I believe that a thousand insurance companies with $4,000,000 each in assets would be just a thousand times better for the country than the Metropolitan Life with $4,000,000,000 in assets.

The average brain is not built to deal with such astronomical ﬁgures. A thousand county seats of 7,000 each are a thousand times more important to this Republic than one city of 7,000,000. Our unemployment and our unrest are the result of the concentration of wealth, the concentration of population in industrial centers, mass production, and a lot of other so-called modern improvements.We are building a tower of Babel.

After reading the two speeches, I said, “Mr. President, you said some pretty strong things in those speeches. You sound like a Populist.” The President had been rereading the speeches with, I felt, considerable pleasure. He said,

Maybe I do. I don’t like giving names to things if I can help it, but that’s the way I felt at the time and still do.That’s one of the things I try to tell these youngsters when I talk to them. That people have to keep their eyes and ears open at all times or they’ll be robbed blind by the Mugwumps in politics and by the big-business interests. 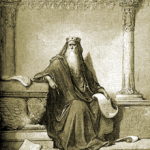 Qoheleth is chuckling now, “There go those silly kids again, building castles of air.” Meanwhile, we the people may demand another New Deal that will attempt to put back the Humpty Dumpty of the Middle Class.  That is the result  of everyone chasing the rainbow of  wealth in the second Gilded Age (1987-2007).

You can read Miller’s book here, or at your local library.  You can learn more about the Miller Papers at the Truman Presidential Library. There is also David McCullogh’s biography to consider as well.

November 4, 2011 Because the Catholic Church Maintains Hope in the World
Recent Comments
0 | Leave a Comment
"Vaya con Dios, Leonard; Rest in Peace."
AnonCollie Leonard Nimoy Explains The Origin Of ..."
"Thank you for sharing"
Andy To Break My Fast from Being ..."
"I've seen Matt Maher live four times...twice since this song was released. I absolutely love ..."
Veritas81 WYD Flashback With Matt Maher, And ..."
"Yes, and Dolan should have corrected the scandalous and wrong decison of his predecessor when ..."
sixbunnies Archdiocese of New York Health Plan ..."
Browse Our Archives
Follow Us!