Because Natural Law is Catholic 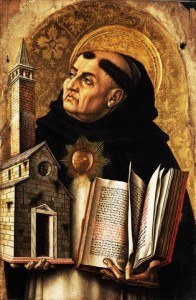 I’m going to have to borrow a line from U2‘s Bono and say, “Am I buggin’ you? I don’t mean to bug ya,” as the Edge’s guitar solo rises to a crescendo. I’m talking about my last few posts, which uncharacteristically have touched on politics and things political.

Blame it on my reading of Jesuit Fr. John Courtney Murray’s We Hold These Truths if you would like. Blame it on the political season if you must, or on my moving toward the half century mark and engaging in the seemingly hopeless task of trying to make sense of it all. But if you really want to put the blame on what I’ve been sharing with you of late, put it squarely on the Catholic Church and her embrace of the concept of Natural Law.

Fr. Murray writes of it extensively in his book. Here’s an example,

In the order of what is called ius naturae (natural law in the narrower sense, as regulative of social relationships) there are only two self-evident principles: the maxim, “Suum cuique,” and the wider principle, “Justice is to be done and injustice avoided.” Reason particularizes them, with greater or less evidence, by determining what is “one’s own,” and what is “just” with the aide of the supreme norm of reference, the rational and social nature of man. The immediate particularizations are the precepts in the “Second Table” of the Decalogue. And the totality of such particularizations go to make up what is called the juridical order, the order of right and justice. This is the order (along with the orders of legal and distributive justice) whose guardianship and sanction is committed to the state. It is also the order that furnishes the moral basis for the positive legislation of the state, a critical norm of the justice of such legislation, and an ideal of justice for the legislator.

Have I got your head spinning yet? Let me simplify things by reminding you of what Our Lord told the sharp legal scholar when he was asked which law is the most important.

He names two, see, which summarize in the first case all the precepts of the “First Tablet” of the Ten Commandments, and in the second case, all that summarizes the precepts of the “Second Tablet.” For the first five commandments are for keeping our relationship with God in order, and the last five are for keeping our relationships with our neighbors in order. Pretty simple when we are reminded of it in this way.

Another simple way to remember “the Way” is to visualize the cross, with the vertical member pointing us to God (think “First Tablet”), and the horizontal member pointing us to our neighbors (think “Second Tablet”).  And as crosses go, we don’t have to look much farther than Our Lord to see where truth led society “in the world” to place him. Natural law, even though reasonable, will lead us to the cross.

There are brighter minds than mine (thank God!) who have studied natural law and thankfully there is a huge body of work that informs us of its application to modern day problems. St. Thomas Aquinas delved deeply into the natural law and modern folks have been bringing it’s light to us ever since. Fr. Murray is one to read to get an understanding of it. Jacques Maritain is another. For those writing on it in light of the Catholic tradition in the present, Francis Beckwith is one worthy of reading as is Hadley Arkes, a recent convert to the Church whose long study and grasp of the natural law propelled him to Rome.

Today I’d like to bug you some more with an article that Arkes wrote for First Things entitled, Natural Rights Trump Obamacare, Or Should.  I’ll get you started here,

It seems to me that Harlan’s argument, returning to the axioms of personal liberty, was the most critical ground for the resistance to that expansion of the Commerce Clause in 1937. But axioms of freedom were rather dismissed by the lawyers for the government, and when they were pushed aside, they faded from prominence in our recollection of the key cases here. What lingered was the box score, and what faded from the furnishings of mind of our lawyers was that concern for the axioms of freedom.

The lesson for our own day is that our lawyers are getting fixated on certain portions of the argument of the Commerce Clause that might just convince the courts, but they may be missing the arguments that really go to the root of the problem with Obamacare. And because they do go to the root—because they do touch the matter of natural right—those arguments may be far more readily understood by the public than arguments that depend on tutoring people on Wickard v. Filburn and the chains of argument that have been contrived under the Commerce Clause.

How might that case be made then again as a matter of natural right in regard to Obamacare? Not by insisting that we have a natural right to not be coerced into buying things we have no wish to buy, but by pointing out that this scheme of national medical care is virtually bound to produce a scheme of rationing, as it has produced that rationing in Britain and Canada, denying medical care to people now entirely reliant on the government for their care. The serious question then is whether this denial to people of the means to preserve their own lives, with means quite legitimate, touches the ground of natural rights.

I believe that it does. We now have in place the scheme for commissions of unelected people, wielding vast discretionary power, set to be loosed entirely from tethers of restraint in 2019, and likely to ration health care as it is now rationed in England. The New York Times reporter John Burns has remarked that in England his son, born weighing only one pound, would not have been given the life-sustaining treatment that brought him through in the United States. I know people in their eighties on dialysis in this country, a procedure that would be denied them in England.

Under Obamacare, medical care will not be denied by an insurance company, under arrangements people had chosen and accepted themselves. If experience offers any guide, there may be more layers of appeal, review, and reversal in the procedures of insurance companies than in a system of command and control run by the central government.

The crucial point, then, is that treatment would be denied by a government that may have the monopoly power to grant or withhold medical care that seems to any person quite necessary to preserve his life. The government, in other words, would deny the right of a person to seek the preservation of his life through means that are thoroughly legitimate, involving no threat to the lives of others and no moral injury sustained to himself…

That lingering doubt about the truth of moral reasoning may mark the condition of the conservative judges in our own day. But it may also be the screen that now works to filter out for them the deepest axioms of the law, and the most powerful arguments that may be brought to bear against the statism and controls of Obamacare.

Go and read the entire article. Because if Joe Six-Pack can understand it, so can you. For another brief primer on natural law, I shared a little post on it once. But be warned: you will find an inexhaustible supply of ore to mine in the Catholic Church and her traditions relative to the natural law. Whole libraries are overflowing with volumes dedicated to its study as well. The Catholic tradition is steeped in its precepts as she combats moral relativism, and she will be carrying on that campaign until the end of time. For as Our King and Lord said in yesterday’s gospel reading,

The natural law rests upon the Rock.

You can read about Hadley Arkes’ conversion at Francis Beckwith’s blog. Now, how ’bout some of that U2 song, eh? Bono and the boys singing about a plutocracy that imploded.

December 2, 2011 Marc Barnes is Studying, So Watch His Best Film Ever
Recent Comments
0 | Leave a Comment
"Vaya con Dios, Leonard; Rest in Peace."
AnonCollie Leonard Nimoy Explains The Origin Of ..."
"Thank you for sharing"
Andy To Break My Fast from Being ..."
"I've seen Matt Maher live four times...twice since this song was released. I absolutely love ..."
Veritas81 WYD Flashback With Matt Maher, And ..."
"Yes, and Dolan should have corrected the scandalous and wrong decison of his predecessor when ..."
sixbunnies Archdiocese of New York Health Plan ..."
Browse Our Archives
get the latest from
Catholic
Sign up for our newsletter
POPULAR AT PATHEOS Catholic
1

Being Thankful When You Do Not...
suspended in her jar
Related posts from Why I Am Catholic