Cardinal Justin Rigali with a Christmas Message We All Need to Hear December 25, 2011 Frank Weathers 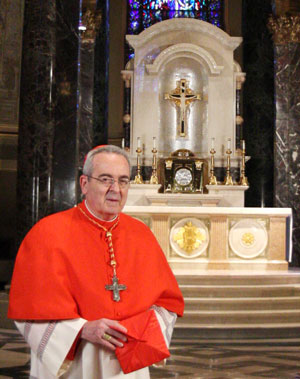 Forgiveness is the message that is often forgotten on this day of the celebration of the Incarnation of the Creator of all that is visible and invisible. After all, the Messiah explained it to the priest Nicodemus and to us, in the third chapter of John’s gospel,

For God so loved the world, as to give his only begotten Son; that whosoever believeth in him, may not perish, but may have life everlasting. For God sent not his Son into the world, to judge the world, but that the world may be saved by him.

He that believeth in him is not judged. But he that doth not believe, is already judged: because he believeth not in the name of the only begotten Son of God. And this is the judgment: because the light is come into the world, and men loved darkness rather than the light: for their works were evil.

I am reminded of this passage by way of an interview that aired this Christmas morning on a radio station where I live. My friend Frank Murphy, who hosts a popular radio show in my area, and is a fellow parishioner at All Saints in my town, interviewed a new neighbor of mine, Cardinal Justin Rigali. Back on October, see, Cardinal Rigali retired to East Tennessee, and the Diocese of Knoxville, at the invitation of his friend and colleague, Bishop Richard Stika.

In the link below, Frank (running joke whenever we’re together is: I point to him and say “he’s the famous Frank; just call me Ismael, or we’ll both answer you.”), interviews Cardinal Rigali about the miracle of the Incarnation; Blessed John Paul II’s forgiveness of his would-be assassin; forgiveness as our Christian vocation; and even of the rights of all humankind, as enumerated in the Declaration of INdependence and our nations’ Constitution.

Thankfully, the famous Frank recorded the interview as a podcast, and I recommend this as a great way to spend a half hour today, or any other day, as you contemplate the mystery of the Incarnation.

December 25, 2011
The Quote of the Week and Operation "Noel"
Next Post

December 27, 2011 This Video Needs More Bacon (Because Catholics Can Laugh)
Recent Comments
0 | Leave a Comment
"Vaya con Dios, Leonard; Rest in Peace."
AnonCollie Leonard Nimoy Explains The Origin Of ..."
"Thank you for sharing"
Andy To Break My Fast from Being ..."
"I've seen Matt Maher live four times...twice since this song was released. I absolutely love ..."
Veritas81 WYD Flashback With Matt Maher, And ..."
"Yes, and Dolan should have corrected the scandalous and wrong decison of his predecessor when ..."
sixbunnies Archdiocese of New York Health Plan ..."
Browse Our Archives
get the latest from
Catholic
Sign up for our newsletter
POPULAR AT PATHEOS Catholic
1

Dear Ohio: A Word About Snow
Steel Magnificat
Related posts from Why I Am Catholic