The Quote of the Week and Operation “Noel”

The Quote of the Week and Operation “Noel” December 25, 2011 Frank Weathers 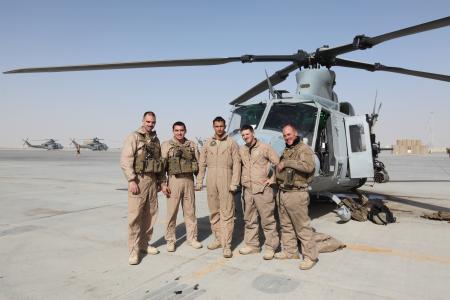 This, in a nutshell, is why I became a Marine.

“It’s a reminder of why we became Marines in the first place. So that our family and friends are able to celebrate the holidays – freely. It makes us happy to know they can, even if we are all the way out here in Kandahar, Afghanistan, away from our loved ones.”

On Dec. 25, however, the Marine aviators’ mission was different. Dubbed “Operation Noel,” the Marine Corps Hueys lifted thousands of pounds of Christmas spirit – items like socks and toiletries, as well as letters, cards and even candy – to the grunts who call these small outposts home.

“The Marines are excited to be supporting our brothers and sisters [in the Marine Corps] in a very different way than we normally do,” said Barnes. “It’s a big privilege to be able to do a mission like this that’s outside the realm of normal.”

Lance Cpl. Andrew Harris is a UH-1Y Huey crew chief with the light attack helicopter squadron. Harris, nicknamed ‘the best door-gunner in the Marine Corps’ by his fellow Marines, flew with Barnes on the Christmas Day mission.

“I think it’s really cool, we’re trying to boost morale,” said Harris. “We’re trying to keep the family of the Marine Corps together, especially during the holidays.”

“It’s still Afghanistan. We still have to be prepared for the threat. That being said, it happens to be the 25th of December,” said Barnes. “It’s about spending Christmas with your family – your Marine Corps family.”

Go read the rest, say a prayer for the safety of our troops, and pray that this war ends soon.

December 23, 2011
Because Tradition says December 25 is When Christ was Born
Next Post

December 25, 2011 Cardinal Justin Rigali with a Christmas Message We All Need to Hear
Recent Comments
0 | Leave a Comment
"Vaya con Dios, Leonard; Rest in Peace."
AnonCollie Leonard Nimoy Explains The Origin Of ..."
"Thank you for sharing"
Andy To Break My Fast from Being ..."
"I've seen Matt Maher live four times...twice since this song was released. I absolutely love ..."
Veritas81 WYD Flashback With Matt Maher, And ..."
"Yes, and Dolan should have corrected the scandalous and wrong decison of his predecessor when ..."
sixbunnies Archdiocese of New York Health Plan ..."
Browse Our Archives
get the latest from
Catholic
Sign up for our newsletter
POPULAR AT PATHEOS Catholic
1