A Contrarian Way To Invest Like A Catholic January 2, 2012 Frank Weathers 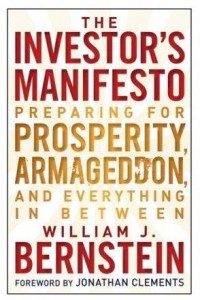 See what I discovered: God made man simple, but they get lost in their many thoughts.—Ecclesiastes 7:29

Just in time for the year-end wrap ups, I saw an article the other day over at Our Sunday Visitor about Investing with a Clear Conscience (and earlier this year over at Crisis Magazine was a similar one called How to Invest Like A Catholic, to which this post was initially addressed). Being a former stock broker, one who let my Series 7 License (and all the rest of my assorted licenses) lapse as soon as I left that field (1995!), Joe Six-Pack, USMC knows a little bit about investing. So reading the articles, to me it sounds more like “How to be neurotic about investing, like a Catholic.”

As if there weren’t enough things to get ulcers about.

Do you want to really add another log onto that fire? I know I don’t. I have enough stuff to worry about already, and my time is at a premium. Besides, here is a nugget of truth by William Bernstein, author of the book you see above:

Truer words about investing could not be written. And on top of that, most folks have little to no control over where to invest for retirement, so these articles demand a rebuttal of sorts. You see, you are held hostage to the menu available by your employer’s retirement plan. That is, if your employer even offers a plan. If they don’t, you’re on your own. And if they do, you have to choose, sometimes from among 300+ funds, none of which are the ones from these articles. What to do?

There is an even more Catholic way to invest, and it’s even simpler than the solution proposed in those forums. Own everything via index funds. Yep, own every single stock and bond (available on the exchanges) in the entire world. Saintly companies and the sinner companies too; both foreign and domestic. Own the whole enchilada. Bonds too. Three funds, and you’re done. Call it an unholy trinity, but it doesn’t get any more Catholic than that. Or call it the Zacchaeus School of Investing approach. Or call it what Bill Schultheis calls it: profound simplicity, which is why this post starts with a passage from my favorite Old Testament book.

It doesn’t get any cheaper either. By cheaper I mean less expensive, which matters a lot to your returns in the long run. How much do costs matter? A whole heap. Because high costs compound like compound interest, only in reverse (on your account balance). I bet you didn’t know that.

Look, I’m not going to bore you to tears with a bunch or reasons why indexing works. The main reasons happen to be low costs, and broad diversification. You can hire mutual fund managers that actively try to beat the returns of the indexes too. And they might even be successful in this pursuit (especially ones that keep their costs low) for a while. But you’ll never identify the winners in advance. And the managers that screen for socially responsible companies? Have you ever heard of survivorship bias? Now you’re making me get boring.

Here’s a quick class for you. The first, and last, thing you need to know about investing in the capital markets is this: you are buying used cars. Better yet, you are buying trading cards. Sure some of them pay you dividends and cool stuff like that, and you never had a baseball card that did that, did you? That’s a neat trick. By now, you may be thinking “Huh?” What’s Frank talking about!

Here’s what I mean. If you invest in the capital markets via mutual funds, exchange-traded funds, or even directly in securities through a brokerage account, you are not providing new investment capital to the companies that you are investing in. Only in an “Initial Public Offering (IPO)” are you given the opportunity to actually provide capital to a firm. No. What you are doing is just buying shares of companies (or their bonds) that were already sold in an IPO many moons ago. Then the value of your investments rise and fall with the general market.

Want to know a little secret? Little guys aren’t invited to invest in IPO’s. Unfair you say? Write your congressman, but it ain’t gonna change anything. Now that you know this fact though, this knowledge should relieve you of the ponderous burden that the Our Sunday Visitor and Crisis Magazine articles were offering you. And it is one almost as burdensome as living under the Mosaic law before the Messiah came. Think about that for a second.

But what of the sinful companies Frank? Like I said, you aren’t providing them capital. Spend the money they earn you (via dividends, capital gains, etc.) in a virtuous way, which is the only thing you can actually control. And what, pray tell, is a sinful company? In the corporate world, companies are legal persons and, ahem, all persons sin. Qoheleth, puts it so:

Wisdom is a better defense for the wise man than would be ten princes in the city, yet there is no man on earth so just as to do good and never sin. —Ecclesiaties 7:12

You could say the same thing about companies. Not a single one of them is pure. If purity is a criteria, then you would need to bury any savings you had in a hole in your backyard. Remember Christ’s parable of the talents? I don’t recommend the “bury it in a hole” strategy.

What else did Christ say about sin?

Do you not realize that everything that goes into a person from outside cannot defile, since it enters not the heart but the stomach and passes out into the latrine?

he who has not sinned, cast the first stone.

Consider this too: most, if not all, of the companies in the major indices employ Catholics in some way, shape, or form. Either as actual laborers or as customers, or as business partners. Do you see the fallacy of screening away companies based on their alleged virtuousness? There ain’t no such animal. Chasing it will lead Catholics to the ghetto, the kind that was in Warsaw.

Consider this teaching from St. Paul,

Eat anything sold in the market, without raising questions on grounds of conscience, for “the earth and its fullness are the Lord’s.”

Otherwise, you would starve buying only what the virtuous farmer produced. Do I need to remind you of the “unclean sheet?” Or that capital markets are, ahem, markets too?

I don’t doubt for a moment that many will disagree with what I am saying in this post. But simplicity in my investing life is more important to me than micromanaging my IRA. Because by owning the whole world I can concentrate on serving God in ways that I couldn’t if I was obsessing about everything under the sun in my retirement account. There would be no time to write posts, or garden, or run errands, or read great books, etc. Or spend in prayer, or in putting a new inner-tube in my daughters bicycle tire, etc.

Obsessing over investment decisions? Phooey on that. I’d rather just go to Mass.

Though I am not a client of this service, much good common sense is provided by Bill Schultheis at The Coffeehouse Investor. Caveat emptor. Also, the books by William Bernstein, and any written by John Bogle, Founder of Vanguard, can help you along here as well.

And that is about all I have to say on this subject, with one exception. Choose an asset allocation of stocks and bonds and stick with it through thick and thin. Don’t compound your sorrows, when the markets go down, by locking in your losses. For short run losses are normal, like the tide ebbing and flowing.

Update: The 35th Anniversary of Indexing.

January 2, 2012 Soldiers and Artist's Should Be Friends?
Recent Comments
0 | Leave a Comment
"Vaya con Dios, Leonard; Rest in Peace."
AnonCollie Leonard Nimoy Explains The Origin Of ..."
"Thank you for sharing"
Andy To Break My Fast from Being ..."
"I've seen Matt Maher live four times...twice since this song was released. I absolutely love ..."
Veritas81 WYD Flashback With Matt Maher, And ..."
"Yes, and Dolan should have corrected the scandalous and wrong decison of his predecessor when ..."
sixbunnies Archdiocese of New York Health Plan ..."
Browse Our Archives
get the latest from
Catholic
Sign up for our newsletter
POPULAR AT PATHEOS Catholic
1