For The Natural Law and a Pile of Shoes 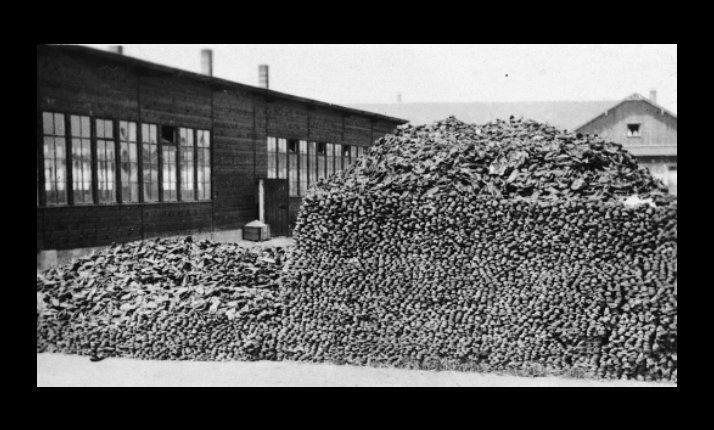 Crisis Magazine has an essay written by Jason Jones that you will want to read, wherein he has a movie recommendation that you will probably want to follow up on too. Who’s Jason Jones? He was the Executive Producer of the film Bella which came out in 2006. Guess where the photograph above was taken? Your cursor will tell you.

For most of you this weekend contains a date you’ll never forget, along the lines of September 11, or December 7 — anniversaries of profound wounds to our country as a whole, even if we didn’t lose a relative in those surprise attacks or the wars that ensued. For millions of Americans, however, January 22 portends a loss that is much more rawly personal. One woman in three who came of age after Roe v. Wade has exercised the “right” the judges discovered in 1973 to terminate a pregnancy; millions of men took part in those decisions; too often forgotten are men who (like me at 17) were bereaved of our unborn children against our wishes. All those Americans lost a family member in the events of January 22, and so this day will never slip by unnoticed, much as most of us wish it would. We’d rather not “go there,” not dredge up the guilt of many flavors—participant’s, bystander’s, survivor’s. It all feels much the same. If I can speak for the many, let me tell you we’d rather think about almost anything else, be it baseball, stock prices, or shoes.

So let’s talk about shoes. One of the authors to whom I owe the most intellectually is the political philosopher Hadley Arkes, of Amherst College. Arkes is the world’s leading advocate of a deeply unfashionable theory called Natural Law. You never hear about that notion any more, but it played a major role in certain historic events: the American Declaration of Independence, the Abolitionist movement, the U.N.’s post-war assertion of human rights that transcend the laws of nations, and the U.S. Civil Rights movement. It’s almost stunning to think that an idea with such a pedigree could simply be dropped by the world’s intellectuals, like a toy that a child grew bored with, but that is what has happened. People will still assert human rights, or insist that our government act with justice, plucking fruit from the branches of a tree they pretend isn’t there. (I won’t speculate for the moment why they do this. Just take it from me that “Natural Law” is a term you shouldn’t use in academia, law, or politics. It will brand you as an extremist.) Anyway, in one of my favorite books by my favorite thinker, Natural Rights and the Right to Choose, Arkes starts by talking not about abstract right and wrong but a particular pile of shoes. That has a better philosophical precedent than you might think: One of Heidegger’s most famous essays concerns the making of shoes.

But Arkes isn’t interested in what Germans have thought about crafting shoes, as in the careful way they protected them, kept shoes safe from heedless destruction in time of war, gathered them carefully and avoided wherever they could the needless waste of a single shoe—almost as if each pair had a unique and irreplaceable destiny, a dignity no man could rightly ignore. You have probably guessed by now where the shoes that interest Arkes were found: piled neatly, outside the gas chamber at an extermination camp. Those shoes, and other personal items like gold teeth, were extracted from the items of human waste those plants efficiently processed into smoke. They remain with us as a testimony to modern economy and thrift. Really, I can think of no other single thing (not a skyscraper or a space ship) that sums up the essence of what it means to be modern as that pile of Jewish shoes.

You will want to go and read the rest, and find out what film he recommends as his favorite of 2011.

Here’s to praying that the Natural Law pendulum starts swinging back along the arc towards human dignity, and not away from it. The March for Life is a tangible attempt to do just that.

January 20, 2012 "The Kid" Got Mentioned in the Wall Street Journal
Recent Comments
0 | Leave a Comment
"Vaya con Dios, Leonard; Rest in Peace."
AnonCollie Leonard Nimoy Explains The Origin Of ..."
"Thank you for sharing"
Andy To Break My Fast from Being ..."
"I've seen Matt Maher live four times...twice since this song was released. I absolutely love ..."
Veritas81 WYD Flashback With Matt Maher, And ..."
"Yes, and Dolan should have corrected the scandalous and wrong decison of his predecessor when ..."
sixbunnies Archdiocese of New York Health Plan ..."
Browse Our Archives
Follow Us!