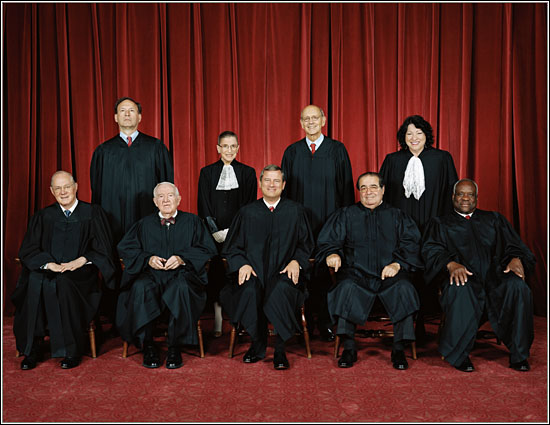 Once again, I heartily endorse the wisdom of the Founding Fathers and their radical concept of separation of powers. Huzzah!

All nine justices of the Supreme Court ruled on Monday that police officers violated the Fourth Amendment rule against unreasonable search and seizure when they attached a GPS device to a suspect’s car and tracked it for 28 days without a warrant. But the court was split down the middle on the reasoning. Four justices focused on the physical trespass that occurred when the police attached the device, four focused on the violation of the suspect’s “reasonable expectation of privacy,” and the final justice, Sonia Sotomayor, endorsed both theories.

Go read the rest. Now, if the Justices would turn their attentions back to the question of the constitutionality of the Patriot Act, the Founders would stop rolling over in their graves.

UPDATE: A friend of mine sends: “Here’s the full text of the ruling for super-nerds,” to which I’ll add for all you sea-lawyers.

January 23, 2012 Another Catholic Blogger You Should Follow
Recent Comments
0 | Leave a Comment
"Vaya con Dios, Leonard; Rest in Peace."
AnonCollie Leonard Nimoy Explains The Origin Of ..."
"Thank you for sharing"
Andy To Break My Fast from Being ..."
"I've seen Matt Maher live four times...twice since this song was released. I absolutely love ..."
Veritas81 WYD Flashback With Matt Maher, And ..."
"Yes, and Dolan should have corrected the scandalous and wrong decison of his predecessor when ..."
sixbunnies Archdiocese of New York Health Plan ..."
Browse Our Archives
get the latest from
Catholic
Sign up for our newsletter
POPULAR AT PATHEOS Catholic
1