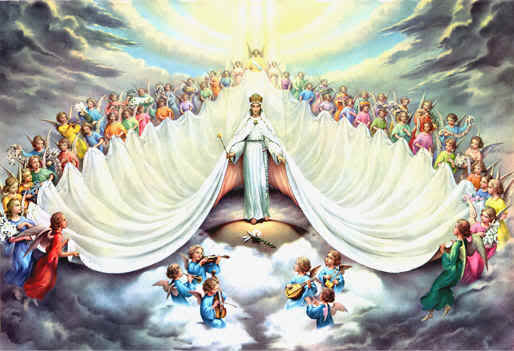 What the Obama Administration doesn’t seem to understand is a truth that needs only to be uttered in the calmest and softest of whispers.  The Church will never support the HHS Mandate, because the Church can never knowingly commit a sin.

Though She is chock full of sinners (100% certified, grade-A sinners, by the way), with low-end mucky-mucks like me (surely one of the greatest of them) spilling over her gunwales, She herself is supernaturally free from the stain of sin. And that’s not something that Joe Six-Pack just made up to make himself feel better, either. It’s a supernatural truth that needs no banging of gongs or clashing of cymbals to precede it.

Remember the YIMCatholic Bookshelf upstairs under the banner above? Do a little digging there, and you can come up with all sorts of voices from the Communion of Saints to back up this salient truth.

And so, Mr. Obama, we interrupt your regularly scheduled programming for a broadcast brought to you by The Church Triumphant. Standby for a few brief messages from St. Paul, Blessed Cardinal John Henry Newman, and St. Jose Maria Escriva, live from the Communion of Saints, sent straight to you in the Situation Room. You may want to gather your staff.

Christ loved the church and handed himself over for her to sanctify her, cleansing her by the bath of water with the word, that he might present to himself the church in splendor, without spot or wrinkle or any such thing, that she might be holy and without blemish. —St. Paul, Letter to the Ephesians, Chapter 5, cf 25-27.

That is pretty clear. But Frank, that’s sacred scripture, and way too old. Got anything more recent?

The Catholic Church holds it better for the sun and moon to drop from heaven, for the earth to fail, and for all the many millions on it to die of starvation in extremest agony, as far as temporal affliction goes, than that one soul, I will not say, should be lost, but should commit one single venial sin, should tell one wilful untruth, or should steal one poor farthing without excuse. —Blessed Cardinal John Henry Newman, Apologia Pro Vita Sua

How’s that, folks? That was old and recent like all eternal truths are. But here’s another that just popped into my in-basket from the Church Triumphant, courtesy of St. Jose Maria Escriva, and it is the longest of the three.

The mystery of the holiness of the Church — that pristine light which can become obscured by the shadows of human baseness — rejects even the slightest thought of suspicion, of doubt about the beauty of our Mother.

Nor can we tolerate, without protesting, that others should insult her. We cannot seek out in the Church vulnerable points in order to criticise them, as some do who show thereby neither their faith nor their love. I cannot conceive of anyone having true affection for his mother who speaks of her with disdain.

Our Mother is holy, because she was born pure and will continue without blemish for all eternity. If at times we are not able to perceive her fair face, let us wipe clean our own eyes. If we are aware that her voice does not please us, let us remove from our ears any hardness which prevents us from hearing in her tone of voice the whistled beckoning of the loving Shepherd. Our Mother is holy, with the holiness of Christ, to whom she is united in body — which is all of us — and in spirit, which is the Holy Spirit, dwelling also in the hearts of each one of us, if we remain in the grace of God.

God desires all men to be saved and to come to the knowledge of the truth. For there is one God and there is one mediator between God and men, the man Christ Jesus, who gave himself as a ransom for all, the testimony to which was borne at the proper time. Jesus Christ instituted only one Church. For this reason the spouse of Christ is one and catholic:universal, for all men.

For many centuries now the Church has been spread throughout the world, and it numbers persons of all races and walks of life. But the universality of the Church does not depend on its geographical distribution, even though this is a visible sign and a motive of credibility. The Church was catholic already at Pentecost. It was born catholic from the wounded heart of Jesus, as a fire which the Holy Spirit enkindled.

In the second century the Christians called the Church catholic in order to distinguish it from the sects which, using the name of Christ, were betraying his doctrine in one way or another. We call it catholic, writes Saint Cyril, not because it is spread throughout the world, from one extreme to the other, but because in a universal way and without defect it teaches all the dogmas which men ought to know, of both the visible and the invisible, the celestial and the earthly. Likewise, because it draws to true worship all types of men, those who govern and those who are ruled, the learned and the ignorant. And finally, because it cures and makes healthy all kinds of sins, whether of the soul or of the body, possessing in addition — by whatever name it may be called — all the forms of virtue, in deeds and in words and in every kind of spiritual gift.

The catholicity of the Church does not depend either on whether or not non-Catholics acclaim and acknowledge it. Nor does it have anything to do with the fact that, in non-spiritual matters the opinions of some persons in positions of authority in the Church are taken up — and at times exploited — by those who fashion public opinion, when these churchmen have views similar to theirs. It will often happen that the aspect of truth which will be defended in any human ideology will find an echo or foundation in the perennial teaching of the Church. This is, in a certain sense, a sign of the divinity of the revelation which the Magisterium safeguards. But the spouse of Christ is catholic, even when it is deliberately ignored by many, and even abused and persecuted, as unfortunately happens in so many places.

So you see, Mr. President? Until you understand the truth of the matter, that the Catholic Church will never knowingly commit a sin, then you are just wasting your time, and digging yourself deeper and deeper. So here are two prayers that the saints can offer you as well. As a group, see, they are such cheerful givers.

you were willing to submit yourself to Christ’s bride in a difficult time in her history. I ask that you intercede for me to the Lord that I may see her as He wants me to. That He will give me a heart to know and love her as He does. Amen. —St. Catherine of Sienna

You experienced much pain and sorrow from the decisions made by the Church, yet never spoke against her. Intercede for me, that I may have the same mind as you towards the Bride of Christ. Amen.—St. Pio

We now return you to your regularly scheduled programming. 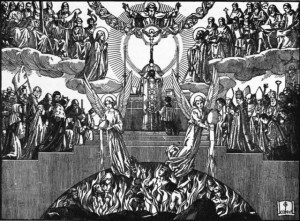 February 13, 2012 Sex, Sex, Sex, Sex, Sex and More Sex
Recent Comments
0 | Leave a Comment
"Vaya con Dios, Leonard; Rest in Peace."
AnonCollie Leonard Nimoy Explains The Origin Of ..."
"Thank you for sharing"
Andy To Break My Fast from Being ..."
"I've seen Matt Maher live four times...twice since this song was released. I absolutely love ..."
Veritas81 WYD Flashback With Matt Maher, And ..."
"Yes, and Dolan should have corrected the scandalous and wrong decison of his predecessor when ..."
sixbunnies Archdiocese of New York Health Plan ..."
Browse Our Archives
Related posts from Why I Am Catholic