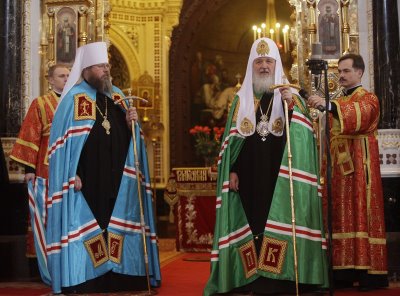 Remember what the Anchoress said about thanking the Obama Administration for clarity its actions have caused? This just in,

The Assembly of Canonical Orthodox Bishops of North and Central America, which is comprised of the 65 canonical Orthodox bishops in the United States, Canada and Mexico, join their voices with the United States Conference of Catholic Bishops and all those who adamantly protest the recent decision by the United States Department of Health and Human Services, and call upon all the Orthodox Christian faithful to contact their elected representatives today to voice their concern in the face of this threat to the sanctity of the Church’s conscience.

In this ruling by HHS, religious hospitals, educational institutions, and other organizations will be required to pay for the full cost of contraceptives (including some abortion-inducing drugs) and sterilizations for their employees, regardless of the religious convictions of the employers.

The First Amendment of the U.S. Constitution guarantees the free exercise of religion. This freedom is transgressed when a religious institution is required to pay for “contraceptive services” including abortion-inducing drugs and sterilization services that directly violate their religious convictions. Providing such services should not be regarded as mandated medical care. We, the Assembly of Canonical Orthodox Bishops, call upon HHS Secretary Sebelius and the Obama Administration to rescind this unjust ruling and to respect the religious freedom guaranteed all Americans by the First Amendment.

I like that word “rescind,” don’t you? It’s the first word in the petition, come to think of it. Thanks for joining the fight, fellows!

February 4, 2012
The Cinematic Good vs. Evil Matrix and a Message from Mission Control UPDATED
Next Post

February 5, 2012 Buzz Lightyear and Coogan & Brydon With a Few Words For Those Who Fear Signing the Petition...
Recent Comments
0 | Leave a Comment
Browse Our Archives
get the latest from
Catholic
Sign up for our newsletter
POPULAR AT PATHEOS Catholic
1

Listen to the Church, not LifeSite,...
Chaos and Old Night
Related posts from Why I Am Catholic