The Cinematic Good vs. Evil Matrix and a Message from Mission Control UPDATED 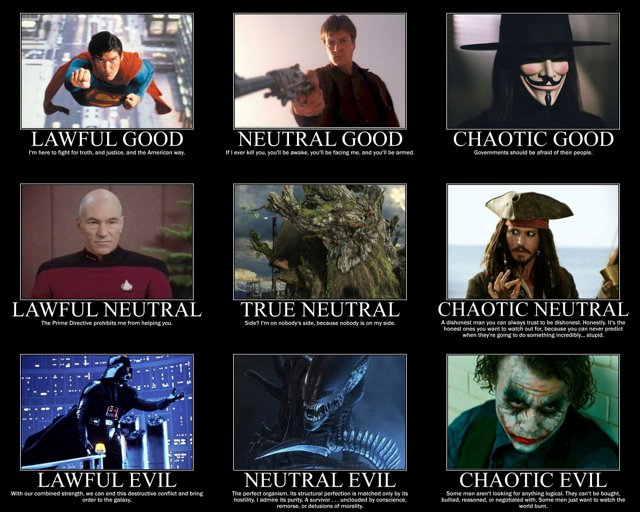 Above, in poster form, are thoughts that flashed though my mind as the solid propellant boosters on the good ship Freedom of Conscience were jettisoned. As these different scenes along the matrix of good vs. evil flashed past my mind’s eye, I recalled the words Our Lord spoke to St. Paul on the road to Damascus,

Saul, Saul, why do you persecute me?

I think you would agree that the place to be is the upper portion of the poster above. Right now, the upper left hand corner is where I hope to reside currently. The good folks at Mission Control sent me a message that, to my mind, confirms this, and it brings me a measure of peace as well. Have you seen it? Here’s a taste:

The Obama administration, to justify its widely criticized mandate for contraception and sterilization coverage in private health plans, has posted a set of false and misleading claims on the White House blog (“Health Reform, Preventive Services, and Religious Institutions,” February 1).In what follows, each White House claim is quoted with a response.

Response: This is not entirely true.To be eligible, even churches and houses of worship must show the government that they hire and serve primarily people of their own faith and have the inculcation of religious values as their purpose.Some churches may have service to the broader community as a major focus, for example, by providing direct service to the poor regardless of faith.Such churches would be denied an exemption precisely because their service to the common good is so great.More importantly,the vast array of other religious organizations – schools, hospitals, universities, charitable institutions – will clearly not be exempt.

Claim: “No individual health care provider will be forced to prescribe contraception: The President and this Administration have previously and continue to express strong support for existing conscience protections. For example, no Catholic doctor is forced to write a prescription for contraception.”

Response: It is true that these rules directly apply to employers and insurers, not providers, but this is beside the point:The Administration is forcing individuals and institutions, including religious employers, to sponsor and subsidize what they consider immoral.Less directly, the classification of these drugs and procedures as basic “preventive services” will increase pressures on doctors, nurses and pharmacists to provide them in order to participate in private health plans – and no current federal conscience law prevents that from happening. Finally, because the mandate includes abortifacient drugs, it violates one of the “existing conscience protections” (the Weldon amendment) for which the Administration expresses “strong support.”

Go read the rest, when you have a moment. Heh, and to think I was sweating writing the reply to the White House response to the little petition ya’ll signed (which supplied all the go-juice to help get this here ship to edge of outer space, thank you very much). Sweat no more, because I just fly ’em, and the really smart folks build ’em.

I’m really glad I’m on their team too, because like David Brooks writes about in the New York Times, there’s a right way, and a wrong way, to fight “the man.” Read his thoughts, and refer to the poster above if your thoughts wander, because fighting with no grounding is futile, and that isn’t what is happening now between the Church and Caesar. Speaking of which, another quote flashed through my mind and I’ll share it with you. It comes from the Patroness of YIMCatholic, a lady who I hold in very high regard,

“About Jesus Christ and the Church, I simply know they’re just one thing, and we shouldn’t complicate the matter.” —St. Joan of Arc

Now that those solid candles have been spent, and separated, the FoC is a little bit quieter up here, and the ride’s a bit smoother too. She’s just a keeping on, keeping on, and the stars are very bright ahead. It won’t be long now, but if I could ask you a favor I hope you will indulge me by sharing the following message with everyone you know, and by all the different avenues at your disposal.

I’d be much obliged. This is Joe Six-Pack, USMC, Commander of the Freedom of Conscience, signing off for now. Pray for us, and may God bless America.

February 3, 2012
Have You Purchased Your Susan G. Komen Pistol Yet? UPDATED
Next Post

February 5, 2012 Here Come the Orthodox Christians! (Rescind the HHS Mandate)
Recent Comments
0 | Leave a Comment
"Vaya con Dios, Leonard; Rest in Peace."
AnonCollie Leonard Nimoy Explains The Origin Of ..."
"Thank you for sharing"
Andy To Break My Fast from Being ..."
"I've seen Matt Maher live four times...twice since this song was released. I absolutely love ..."
Veritas81 WYD Flashback With Matt Maher, And ..."
"Yes, and Dolan should have corrected the scandalous and wrong decison of his predecessor when ..."
sixbunnies Archdiocese of New York Health Plan ..."
Browse Our Archives
Follow Us!