A Letter to the President That Explains His Drop in the Polls, A Film, and A Song

A Letter to the President That Explains His Drop in the Polls, A Film, and A Song March 13, 2012 Frank Weathers 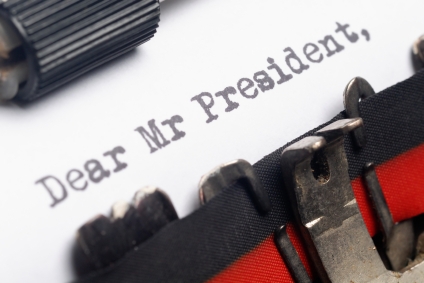 Earlier today I wrote a book-length post built around explaining how “confirmation bias,” or what I call “New Media Cocooning,” facilitates our checking our brains at the door and ignoring facts, which helps us cling to beliefs that cannot hold up under the harsh light of reason. Joanne McPortland does a better job of doing the same thing, using March Madness and basketball instead of the stock market.

She wrote an open letter to the Commander-in-Chief, who just happens to be visiting her town for the opening of the NCAA Basketball Tournament. In her letter, she provides a few real-world examples of the poll numbers that the New York Times buried (and hopes no one sees) regarding Mr. Obama’s recent drop in the polls. The Committee to Re-Elect the President might want to take a gander at what she wrote. Here’s a taste,

There was a time when I would have added you, Mr President, to the things I love about this visit. I’m a card carrying Democrat, the daughter of a union shop steward, New Deal and Civil Rights and Camelot all the way. In 2008 I let my son’s enthusiasm for you and all you represented woo me away from my lukewarm support of Hillary Clinton, even though I thought even then there was something too-good-to-be-true about the way you absorbed all our war-weary, Bush-burdened projections. I put a HOPE decal in my car window right next to my Go, Flyers! decal. I cheered my heart out at your win, which I truly believed was the start of better days for all Americans. (And for my fellow Catholics who want to read this paragraph as evidence for excommunication, that’s for another combox, OK?)

Since then, though, you’ve disappointed me, Mr President. Even before I returned to the Catholic faith I grew up in, and began to reexamine everything in the light of that faith’s teachings, you showed absolutely no sign of being the bridge-builder you rightly said America needed in that fabulous 2004 convention speech. In your relationships with Congress, even when you had a majority, you talked compromise and did none of it. You ramped up the war efforts you had said were stupid. You kept Guantanamo open, and gave the nod to torture. You approved a return to the US-as-assassin model of dealing with dictators you don’t like, while allowing those who serve your interest to continue slaughtering innocents. You added even more restrictions on Americans’ constitutional freedoms than the original Patriot Act dreamed of. And you wouldn’t fight to keep a single-payer health plan on the table, settling instead for a bloated patchwork doomed to displease everyone, just so you could say you passed a health care act.

But it’s been your administration’s recent cynical manipulation of “the contraceptive issue”–an agenda mandated by your supporters in Big Pharma and Planned Parenthood, and planted in the midst of the debates in order to make the religious right (which now includes extremist Catholics like Rick Santorum and Catholics-by-marriage like Newt Gingrich) snap at the bait. You have managed this really well from your end, manufacturing a “war on women”–Catholics want women to be pregnant or die!–while waging war on the First Amendment. I sometimes wish the Catholic bishops hadn’t jumped at the bait, too (because I truly don’t think this is the hill we want to die on), but you knew they would, and knew that Catholics are already hated enough (for our own sins, in too many cases) in this country to make dissing us equal an automatic double-digit bump in your popularity stats. That’s my biggest disappointment–that you’re nothing but a Chicago pol after all.

So I can’t love that you’re here, and I can no longer love election season, this poli sci minor’s usual idea of heaven. See, there’s no way I can vote for you, because as Nancy Pelosi, the Lady Macbeth of Catholics, says, I have “that conscience thing.”

Go read the whole thing, because it is fantastic. And now we learn that the Obamacare Abortion Rider(?) will add an entire $1.00 to the cost of your monthly insurance premium, too? Like a friend noted earlier, “Abortion for a buck? Something about this isn’t saying ‘safe, legal, and rare’ to me.” Definitely not.

Which reminds me to point you to another great article I read today. This one is written by Joseph Susanka, Patheo’s resident movie buff. It’s called, Breaking the Promises We Make to Ourselves, An anime that asks some timely and terrifying questions of Americans facing an election full of hard choices. He writes of an anime film entitled, The Place Promised in Our Earlier Days. Here’s a slice that should bring you back for the rest of the pie,

For Americans awakening to just how “broken” our culture has become, this is a timely and terrifying theme. We look at our children, consider the economic, political, and technological upheaval of the last few years and feel profoundly insecure about what it is we are handing them. What will their “promised place” look like? Will it be a peaceful place or a dark one, a place of promise or of prostration? Will it even be recognizable to us, or will factors beyond our control test their beliefs and their resolve far more stringently than ours ever were? If so, have we prepared them for it?

It takes the better part of a believer’s life to learn and accept that God knows (and we don’t need to know) what He has in store for us. Despite our conceits to the contrary, He has promised us nothing in this life—nothing, that is, but suffering, ridicule, tribulation, and death. What He has promised us is a final glorious reward for faithful devotion to Him, and for our boundless confidence in His Divine Providence.
Sometimes we see the dashing of our hopes and expectations as a sign of God’s dissatisfaction. In so many cases, however, our perceived “failures” are simply our own unwillingness to relinquish our narrow, inflexible plans for God’s greater one.

Read it, because you’ll like it. All this election talk makes it seem like a good time for a song to me, though I think the lyrics could use a slight refreshing.

March 14, 2012 A "Recalibration" of the Fight Against The HHS Mandate? Possibly An Announcement Soon UPDATED
Recent Comments
0 | Leave a Comment
Browse Our Archives
get the latest from
Catholic
Sign up for our newsletter
POPULAR AT PATHEOS Catholic
1