Bishop Lori Goes “Columbo” on the Editors of “America” Magazine 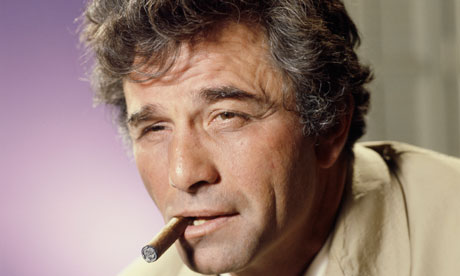 I don’t know about you, dear reader, but I loved Peter Falk’s character of the seemingly bumbling detective named Lt. Columbo. All of the episodes were marvelous examples of the conventional wisdom assuming criminals, who also just knew that they were the smartest people in the room, winding up getting out foxed by this seemingly idiotic, nay, imbecilic, homicide inspector.

What a panel of speakers/guests, eh? You gotta love Peter Falk as Columbo! Shades of G.K. Chesterton’s Father Brown, anyone?

Now, I don’t know if you saw the March 5 edition of America Magazine, the Jesuit run publication, where the editors recently fell all over themselves to make the case that the Bishops are making too much of the HHS Mandate, and the Executive branch’s machinations to take away American citizens religious liberties. I didn’t pay it too much mind, see, because like I said before, I’m following the shepherds on this issue, who represent the Magisterium, and not the folks that publish magazines hoping to sway the truth-bearers to the side of Ralph Wolf’s accommodation.

Bishop William E. Lori, who testified before Congress on the panel regarding religious liberty, and shared the Parable of the Kosher deli and the Pork Mandate, caught the issue and wrote a letter to the editors,

The March 5th America editorial takes the United States Bishops to task for entering too deeply into the finer points of health care policy as they ponder what the slightly revised Obama Administration mandate might mean for the Catholic Church in the United States. These details, we are told, do not impinge on religious liberty. We are also told that our recent forthright language borders on incivility.

What details are we talking about? For one thing, a government mandate to insure, one way or another, for an abortifacient drug called Ella. Here the “details” would seem to be fertilized ova, small defenseless human beings, who will likely suffer abortion within the purview of a church-run health insurance program.

What other details are at issue? Some may think that the government’s forcing the Church to provide insurance coverage for direct surgical sterilizations such as tubal ligations is a matter of policy. Such force, though, feels an awful lot like an infringement on religious liberty.

Still another detail is ordinary contraception. Never mind that the dire societal ills which Pope Paul predicted would ensue with the widespread practice of artificial contraception have more than come true. The government makes the rules and the rules are the rules. So, the bishops should regard providing (and paying for) contraception as, well, a policy detail. After all, it’s not like the federal government is asking bishops to deny the divinity of Christ. It’s just a detail in a moral theology—life and love, or something such as that. And why worry about other ways the government may soon require the Church to violate its teachings as a matter of policy?

…Oh, and as Detective Colombo used to say: “Just one more thing.” It’s the comment in the editorial about when we bishops are at our best. Evidently, it’s when we speak generalities softly and go along to get along, even though for the first time in history the federal government is forcing church entities to provide for things that contradict church teaching. Maybe Moses wasn’t at his best when he confronted Pharaoh. Maybe the Good Shepherd was a bit off his game when he confronted the rulers of his day.

But those are just details.

Go read it all. And do check out our Jesuit brothers thoughts on this issue. Lest you think I’m bagging on Jesuits, I’m not. I’m close friends with Blaise Pascal, and though he had it in for all Jesuits, I don’t agree with him in that regard. After all, Jesuit Father John Courtney Murray pushed me to draft that White House petition in the first place. Besides, America Magazine doesn’t speak for the order as a whole, which is why James V. Schall, SJ, a professor at “in the news” Georgetown University, can write thoughts like these over on The Catholic Thing,

The long history of what is called “separation of church and state” has come full circle. It began over concerns with too much interference by religion in politics, though the opposite was usually the danger. The United States was almost the only country in which bishops could be appointed without government interference and in which Catholics were free to have and run their own institutions.

The Catholic Church has hammered out an incisive understanding of the claims of secular and spiritual power. Both have a proper place. Within the last months, however, the Obama administration actively claims practically full control over most aspects of public life, including religious life. The administration not only seems to have no respect for the Catholic position, but no sympathy for the tradition and Constitution of this country itself.

The Catholic Church became comfortable with the historic arrangement of practice and principle. Suddenly the Church, with the institutions she has worked many generations to establish, is in the deadly sights of an all-controlling state. Many of the principal actors pushing for this state aggrandizement are Catholics. They, of course, claim a “right” to explain what the Church and the state really are. Optimists expect help from the courts or the electorate, but it’s rash to count on it.

Cardinal George’s analysis is incisive. “This year, the Catholic Church in the United States is being told that she must ‘give up’ her health care institutions, her universities, and many of her social service organizations. This is not a voluntary sacrifice. It is the consequence of the already much discussed Department of Health and Human Services regulations now filed and promulgated for implementation beginning August 1 of this year.” The issue is no longer abstract.

…This nation was once called the “land of the free and the home of the brave.” The brave and the free are now those who fear being “destroyed” by the state that once “separated” the two powers. We are being asked to render to Caesar the things that are God’s.

And that is not a pretty picture. I wonder how Columbo would handle this case? With kindness, I daresay. Columbo never came unglued, see? He never went on a rampage of “I’ll show these crooks who is boss!” No siree. ‘Ol Lieutenant Columbo would humbly, and charitably, bumble the crooks right to the booking desk, where the courts would take care of the rest. Like how he handles John Cassavetes here,

That is our role model for this good fight. Who else would have the understated courage to ask St. Peter for a light? 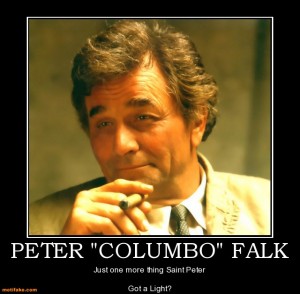 March 5, 2012
The Politics of the HHS Mandate Made Clear, Part Deux
Next Post

March 5, 2012 The Truth About the HHS Mandate in 2 Minutes
Recent Comments
0 | Leave a Comment
Browse Our Archives
get the latest from
Catholic
Sign up for our newsletter
POPULAR AT PATHEOS Catholic
1