The Politics of the HHS Mandate Made Clear, Part Deux

The Politics of the HHS Mandate Made Clear, Part Deux March 5, 2012 Frank Weathers 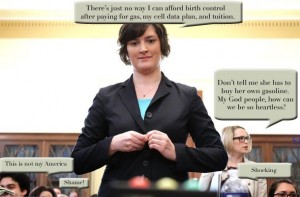 Remember the other day when I said “it’s all about getting votes for the incumbent, and staying in power?” One doesn’t have to be Sun Tzu to have figured this out. The trick is not to look suspicious. You know, make them watch one hand…instead of the one that’s ripping them off.

The folks on The Hill noticed,

President Obama will address the graduates of Barnard College at this year’s commencement, The Hill has confirmed.

Obama will deliver the keynote address at the women’s college in New York on May 14.

Obama recently found himself in the middle of a contraception debate, after his administration issued a rule requiring health insurers — including some religious organizations such as charities and hospitals — to cover contraception without a co-pay.

Heh. Who knew? The headline should have read, “President Obama Begs to Speak at Commencement at New York women’s college.” That way, it would have been more accurate.

Plenty of us know the truth here, but plenty still don’t. So be of good cheer! Wake your friends and phone the neighbors, and let them know that the hype about women’s rights is just that. Hype. In fact, it’s complete balderdash, as the Center for Disease Control makes it known that folks who want contraception can find it easily and cheaply. Been to a Walgreens or CVS lately? Get real.

No. The issue is what it has been since the beginning: a creeping diminution of our Constitutional rights, and we’re not going to let it continue. The thing of it is, we have to fight this fight in the manner of happy warriors. Warriors who speak with reason, charity, and compassion, but also with the clarity to make it known that this isn’t a women’s rights/ women’s health issue.

“In the evening of our life,” wrote St John of the Cross, “we will be judged on love alone.” Maybe that’s what this New Evangelization thing is all about, and why this is all happening now. What difference would it make if our love were as public, as political, as visible and tactile, as headline-making, as undeniable as our principles? What if, instead of tithing mint and rue, we lived God’s infinite providence? What if we lifted burdens instead of laying them? What if new generations were to say, “See how these Christians love us all!”

Because it’s much bigger than that, and more important too. It’s a human rights, civil rights, and civil liberties issue for all citizens.

So take a note from the playbook of the Apostles. Don’t get angry about a little white martydom. Share the Good News with charity and clarity and remember to do like St. Peter & Company did when the Sanhedrin,

had them flogged, ordered them to stop speaking in the name of Jesus, and dismissed them. So they left the presence of the Sanhedrin, rejoicing that they had been found worthy to suffer dishonor for the sake of the name. And all day long, both at the temple and in their homes, they did not stop teaching and proclaiming the Messiah, Jesus.

That’s the spirit. Caritas in veritate, or bust!

March 5, 2012 Bishop Lori Goes "Columbo" on the Editors of "America" Magazine
Recent Comments
0 | Leave a Comment
Browse Our Archives
get the latest from
Catholic
Sign up for our newsletter
POPULAR AT PATHEOS Catholic
1

Cancel Culture? Or Actions and Consequences?
On the Catholic Beat
Related posts from Why I Am Catholic