Cardinal Dolan on the O’Reilly Factor’s “No Spin Zone” and an Idea to Get Him on Comedy Central Too.

Rocco Palmo scooped this up first, naturally, and it’s fantastic.

But while Rocco waxes euphoric about our favorite USCCB quarterback getting seen by over 3 million (mostly conservative) viewers on Bill O’Reilly’s show, I’m thinking His Excellency should take his show on the road, and head over to Comedy Central and pick up the other viewers too. He should make appearances where the rest of the viewers, including liberals and independents, are: The Daily Show with Jon Stewart, and The Colbert Report. 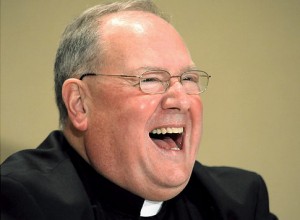 With his sense of humor, he would be a shoe-in. According to numbers from data gathered last summer, Stewart had more viewers than the entire Fox Network, with the exception of Bill O’Reilly.

Just how big is the disparity between Jon Stewart and Fox News?

And Stephen Colbert averages 1.5 million viewers nightly, so this sounds like an idea that has some merit, don’t you think? Not that anyone listens to Joe Six-Packs’ opinion.

Speaking of Comedy Central, check out Steven Colberts’ latest segments on the arguments on the Affordable Care Act (Obamacare) at the Supreme Court this past week. I think President George Herbert Walker Bush is worried about being forced to eat broccoli, or something. Scary!

Here, I love how Steven reminds us about the bill 94 of our senators signed (bipartisan support for that one!) stripping citizens of our rights of habeas corpus, setting us up for indefinite detention, and maybe even targeting us with drones at the command of Seizure (and his minions) in Part II. Well played, sir.

I think Cardinal Dolan may want to check with Fr. James Martin, SJ about getting a spot on Colbert’s show. I mean he’s the Chaplain, so there’s only one degree of separation to overcome, right? And I’m sure Stephen would use moral suasion to also get His Excellency some air-time with Jon Stewart too. Think of the possibilities! I reckon ol’ Stephen would even have a hard time staying in character.

If you have any contacts that could help, give them a nudge.

March 28, 2012
Mr. President? A Trifecta of Anti-HHS Mandate Videos for the Situation Room
Next Post

Petitions or Open Letters Demanding Public...
Public Catholic
Related posts from Why I Am Catholic