For Your Lenten Friday Night at the Movies II UPDATED

For Your Lenten Friday Night at the Movies II UPDATED March 9, 2012 Frank Weathers 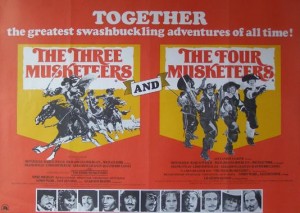 Today, movie fans, we have a first for the YIMCatholic Lenten movie series: a double feature. That’s because the two movies presented here tonight were really meant to be one movie, but it was just way too long. I don’t know if Richard Lester just went wild, or if he couldn’t stand the idea of leaving Alexandre Dumas’ adapted story-line on the cutting room floor.

So for tonight (and maybe even into tomorrow) we head to a time when France was Catholic, but the Reformation was underway. I am pleased to present a pair of my favorite movies of all time: The Three Musketeers and it companion piece, The Four Musketeers. Both are conveniently available via Netflix instant streaming.

Athos (Oliver Reed), Porthos (Frank Finley), and (my favorite Jesuit) Aramis (Richard Chamberlain), meet a bumpkin named D’Artagnan (Michael York), fight among themselves, for their King, Louis XIII (Jean Pierre Cassel), against Rochforte (Christopher Lee) and Cardinal Richelieu (Charlton Heston), and then there are the Huguenots.

Did I forget to mention the ladies? Incroyable! Constance de Bonacieux (Raquel Welch), who works for Queen Anne (Geraldine Chaplin) as her dressmaker, is the unfaithful wife of D’Artagnan’s landlord. Lady de Winter (Faye Dunaway) plays a double-agent who assists the queen in her affairs with the Duke of Buckingham, and has a few of her own.

So how is this an appropriate movie for Lent? I like to think of it as a comic homage to our fallenness. Oh, the plans we make, and schemes, and intrigues that result from the same. And then, there is all the unplanned madness we encounter as well. And on top of all that, I just love the way the sword fight scenes are choreographed. So there. Consider it a Downton Abbey for guys who like beer.

Here is the theatrical trailer for the first film.

The adventures of young D’Artagnan all start with the best.opening.sequence.ever. A feast for the ears and eyes.

Can’t you just smell the popcorn? Gird you loins for camaraderie, great sets and costumes, great lines delivered with panache by an all-star cast in wonderful scenes shot on location in the Europe that inspires you to strap on a sword and jump over moats and climb embrasures for the woman you love (though you probably shouldn’t). Scenes like this one, where the lads are fighting the Huguenot rebels, for example, from the second film are why I always come back to this film version as the best Musketeer movie of all.

Nice shot with the bubbly, there Aramis. En garde! All for one, and one for all!

March 9, 2012
The Article on the HHS Mandate America Magazine Did Well By Publishing
Next Post

March 10, 2012 So Matthew Archbold Thought He Didn't Sign Up For This
Recent Comments
0 | Leave a Comment
"Vaya con Dios, Leonard; Rest in Peace."
AnonCollie Leonard Nimoy Explains The Origin Of ..."
"Thank you for sharing"
Andy To Break My Fast from Being ..."
"I've seen Matt Maher live four times...twice since this song was released. I absolutely love ..."
Veritas81 WYD Flashback With Matt Maher, And ..."
"Yes, and Dolan should have corrected the scandalous and wrong decison of his predecessor when ..."
sixbunnies Archdiocese of New York Health Plan ..."
Browse Our Archives
get the latest from
Catholic
Sign up for our newsletter
POPULAR AT PATHEOS Catholic
1