A Petulant POTUS, or an All-Powerful Genie? 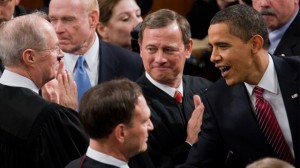 Here’s hoping he’s both. In the “petulant President” department, John Fund, a writer based in New York, and the author of Stealing Elections: How Voter Fraud Threatens Our Democracy, has a pretty good recap piece over at National Review Online from this weeks’ Presidential Follies regarding the Litigator-in-Chiefs’ constitutional law gaffs.

What follows is the part of Funds’ piece that hits home with me,

No one believes the Supreme Court will rule on the constitutionality of Obamacare based on bush-league attacks on its integrity. But Obama’s misstep is only the latest in a series of blunders that further undermine his position. The presentation by Solicitor General Donald Verrelli last week before the Supreme Court was widely panned by legal scholars as weak and evasive. Verrelli caused even some liberal lawyers in the audience to wince when he preposterously claimed that Congress has passed Obamacare to deal with a serious problem “after long study and careful deliberation.” Whatever you want to call the chaotic, late-night brow beating of reluctant members to pass something — anything — to reform health care two years ago, it wasn’t pretty and it was far from careful. Recall that Senate Democrats forgot to include a standard severability clause in their drafting of the bill, which would allow the entire law to stand even if one provision is deemed unconstitutional.

And when it got to the legal substance, the Obama Justice Department didn’t do much better. “The court began where it should have begun with limiting principles (to the federal government’s power),” noted Jonathan Turley, a well-known liberal law professor at George Washington University. “And what was remarkable is that the administration seemed almost unprepared or unwilling to answer those questions with any clarity.”

The incoherence with which the Obama administration has addressed the entire issue of its signature domestic achievement continued yesterday when the president began a spat with the judiciary that was factually wrong, fatuous, and one he can’t possibly win. Several of the liberals I spoke with at Berkeley last night could only shake their head at how the man they voted for on the basis of ”hope and change” in 2008 looks like he’s in over his political head.

Remember back in the heady days when the Freedom of Conscience petition was shape-shifting into faster, and faster aircraft/spacecraft? Joe Six-Pack went on record saying that the Administration had “uncorked it” with the HHS Mandate then, and lately these odd statements by the President seem to be more evidence that “the Audacity of Hope” is coming unglued.

Or maybe the POTUS just believes all of his press-releases, and the “you’re the greatest since (fill in blank with coolest political leader ever)” compliments and back slapping by his coterie of sycophants and hangers-on. As for me, I get the distinct feeling that he is kind of like this cartoon character named Jafar below. Is it wrong for me to hope that his final wish comes true (courtesy of the Judicial Branch) too?

I’ve always enjoyed Aladdin. Great songs! And the “itty-bitty living space?” Metaphorically speaking, can you say the lamp is the voting booth? Yes.we.can.

Francis: Evangelize by Example, not Pushing...
Through Catholic Lenses
Related posts from Why I Am Catholic