Dr. Estrangedlove or: How I Learned to Stop Worrying and Love the Church UPDATED 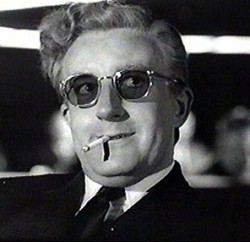 The word is that the Society of St. Pius X (SSPX) may be coming back home to Rome after a long journey through the wilderness. If true, I think that it’s great news.

Father Zulsdorf concurs, and knows waay more about this than Joe Six-Pack. The folks at Rorate Cæli have the complete scoop.

Disclaimer: I don’t know much about the SSPXer’s. But when it comes right down to it, I can truthfully say the same thing about the Jesuits, Franciscans, Rosminians, Calmodolese, Norbertines, Redemptorists, Carmelites, etc., etc. The difference between SSPX and the orders I mentioned above is that the former kind of went rogue (or went completely off the deep end, depending on who you ask), while all of the latter have stayed faithfully under allegiance to the Vatican (in this century, so far).

Why do I think it’s good news? “Frank,” you may be asking, “shouldn’t there be only one way for Catholics to worship? Only one form of the Mass? Only celibate priests? Only one approved liturgy? A simple, uniform set of rules for how to worship so that everyone knows exactly what they are supposed to do and when? And absolutely, positively zero duplication and overlap?”

Not that anyone is asking my opinion or anything but I think all of the different ways that are approved under the Way are good. That is, as long as the Pope says so. If il Papa says SSPX are in compliance, and in communion with him, than it’s good enough for me.

Looking at it from a military point of view, the Catholic Church is like one, huge, Allied Army fighting in an ongoing and everlasting (until the end of time) world war. Just like in World War II, when the Allies teamed up to fight the Axis. All the different countries, different armies, regiments, divisions, etc. with their own set of norms, histories, elan, esprit, strengths (and weaknesses), all came together to fight a common foe.

Was the organization clean? On paper, maybe. Was the culture of Patton’s Third Army, for example, the same as Field Marshal Montgomery’s Eighth Army? Were the Royal Marines at odds with the Royal Fusiliers? Maybe in garrison, sure, but when at the front? Could the U.S. Marines have won the entire war by themselves? Dream on, Chesty (wherever you are).

And so I say (when it’s official) Welcome Back SSPX! Let’s put a ring on your finger and slaughter the fattened calf! There will probably still be some epic bar-fights when the troops are on R&R, but as long as the war continues, that’s what the Shore Patrol is for.

John Allen – Lefebvrite schism may be nearing an end

Hey, not so fast! Communiqué from the General House of the Society of Saint Pius X (April 18, 2012)

Strange Love Depeche Mode? When it works, serve it up!

April 16, 2012
Brides-to-Be and the Blindness of Vanity
Next Post

April 18, 2012 The Logical Vegetarian (A Few Words for Wednesday)
Recent Comments
0 | Leave a Comment
Browse Our Archives
Follow Us!