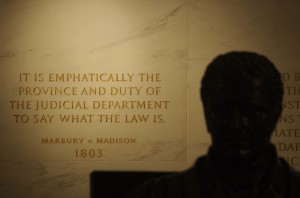 Oops. That’s awkward. And while the board looks the same, chess is a whole ‘nother game than checkers.

You see, after yesterdays presidential tirade regarding the Supreme Court, today a lower court handed the Litigator-in-Chief, via the Justice Department, a homework assignment regarding Judicial Review, and a query as to whether the Executive Branch understands the concept. A three page essay is due on Thursday. Mark Shea has a little fun with this turn of events.

You know, if you are a sophomore in high school taking American Government, or U.S. History, and fumble the meaning of the courts decision in Marbury vs. Madison, then you’re probably staring at a “D” grade on your upcoming final exam. Not good.

So being the charitable fellow I am, I searched all over the place for a handy-dandy lesson plan on Judicial Review, and I found one. I hope it’s not too complicated to understand. Everything you need to know is right here, from the background, to assessment tools. Looks like a home schoolers dream for a current events assignment.

Who was the most influential American of the founding era of the United States: George Washington, due to his military and political achievements? Thomas Jefferson, for the Declaration of Independence and the acquisition of the Louisiana Purchase? James Madison, for his “writing” of the Constitution and subsequent service in the House of Representatives, as Secretary of State, and President? Or might it be John Marshall, who served as Chief Justice of the U.S. Supreme Court for 34 years, longer than any other Chief Justice, and whose ground-breaking decisions still affect the lives of every American?

What if the Supreme Court did not have the power to review laws or executive decisions, to overturn those that are “unconstitutional” – how different might life be in the United States? Until 1803, it was not a foregone conclusion that the Supreme Court of the United States would have that power, despite the fact that judicial review had its origins in early seventeen-century England and had been asserted by James Otis in the period leading up to the American Revolution. A relatively minor lawsuit led to one of the most important Supreme Court decisions in American history, Marbury v. Madison, laying the foundation for the Court’s ability to render its decisions about laws and actions. In Marbury v. Madison, the Supreme Court claimed the power to review acts of Congress and the president and deem them unconstitutional, creating a precedent for an American process of judicial review. Through the decision of Chief Justice John Marshall, then, the court assumed the powers with which it has since played such a vital role in American life.

There, I even highlighted the key part. Aren’t I helpful? I think my work is done here. Let me know if I need to let you borrow my notes on the Necessary and Proper Clause. Oh, you need those too? Sheesh. 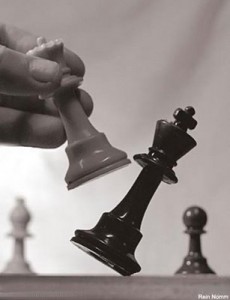 April 3, 2012 Five Reasons Why I Voted For Cardinal Dolan to Make the TIME 100
Recent Comments
0 | Leave a Comment
Browse Our Archives
Related posts from Why I Am Catholic