Cardinal Dolan on CBS This Morning with Charlie Rose

Cardinal Dolan on CBS This Morning with Charlie Rose May 22, 2012 Frank Weathers 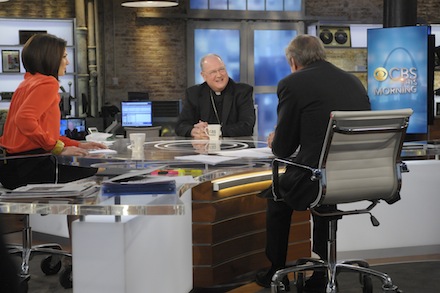 Yesterday I lamented the paucity of media coverage regarding the lawsuits filed by 40+ Catholic groups. It appears that the media outlets had some backing and filling to do. CBS again seems to be leading the way, at least in terms of getting the story out to the public and bringing in folks to get to the roots of it.

Here is Timothy Cardinal Dolan speaking with Charlie Rose on CBS This Morning. Charlie Rose and Erica Hill do a great job asking pertinent questions, while His Eminence is in his element explaining the whys and the wherefores of the lawsuit. He also discusses the controversy surrounding Catholic college commencement speakers and such. Have a look (please pardon any attempt to sell you beer and shampoo),

As I mentioned yesterday, birth control pill packages, etc. will always be floating in the background. Read more over at CBS.

Obviously, Cardinal Dolan can’t be everywhere, and on every network at the same time, but he lands on his feet and is a cheerful witness whenever he does.

May 21, 2012
The Dozen Lawsuits Filed Today Garnered all of 15 Seconds on CBS News. We Shall Overcome.
Next Post

May 22, 2012 Mary Ann Glendon Explains Why The Bishops Are Suing the U.S. Government
Recent Comments
0 | Leave a Comment
Browse Our Archives
get the latest from
Catholic
Sign up for our newsletter
POPULAR AT PATHEOS Catholic
1

Hello, Religious Privilege is Good and...
Femina Ferox
Related posts from Why I Am Catholic