Mary Ann Glendon Explains Why The Bishops Are Suing the U.S. Government

Mary Ann Glendon Explains Why The Bishops Are Suing the U.S. Government May 22, 2012 Frank Weathers 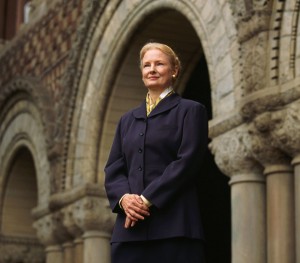 Who is Mary Ann Glendon? She’s the Learned Hand Professor of Law at Harvard Law School. I love that title, as Learned Hand sounds like someone I’d like to get to know better. Because with a name like that, he’s got to be good. After all, Judge Learned Hand wrote wise opinions such as this,

What do we mean when we say that first of all we seek liberty? I often wonder whether we do not rest our hopes too much upon constitutions, upon laws, and upon courts. These are false hopes; believe me, these are false hopes. Liberty lies in the hearts of men and women; when it dies there, no constitution, no law, no court can save it; no constitution, no law, no court can even do much to help it. And what is this liberty which must lie in the hearts of men and women? It is not the ruthless, the unbridled will; it is not freedom to do as one likes. That is the denial of liberty, and leads straight to its overthrow. A society in which men recognize no check upon their freedom soon becomes a society where freedom is the possession of only a savage few; as we have learned to our sorrow. P. 190, The Spirit of Liberty (1944).

See what I mean? But back to Professor Glendon. She was appointed as the U.S. Representative to the Holy See and served there through 2008-2009. No latecomer in legal circles, she has been on the Harvard Law faculty for some time. Yesterday she wrote an article for the Wall Street Journal Online Edition, that is in the print edition today. Therein, she lays out, much like Timothy Cardinal Dolan did this morning, the whys and wherefores of what some say is the “biggest religious lawsuit in U.S. history.” The one that is finally getting a little press.

She’s a Catholic, she’s a woman, and here is what she has to say,

The main goal of the mandate is not, as HHS claimed, to protect women’s health. It is rather a move to conscript religious organizations into a political agenda, forcing them to facilitate and fund services that violate their beliefs, within their own institutions.

The media have implied all along that the dispute is mainly of concern to a Catholic minority with peculiar views about human sexuality. But religious leaders of all faiths have been quick to see that what is involved is a flagrant violation of religious freedom. That’s why former Arkansas Gov. Mike Huckabee, a Baptist minister, declared, “We’re all Catholics now.”

More is at stake here than the mission of all churches, including the Catholic Church, to provide social services like health care and education to everyone regardless of creed, and to do so without compromising their beliefs. At the deepest level, we are witnessing an attack on the institutions of civil society that are essential to limited government and are important buffers between the citizen and the all-powerful state.

If religious providers of education, health care and social services are closed down or forced to become tools of administration policy, the government consolidates a monopoly over those essential services. As Cardinal Timothy Dolan, president of the U.S. Conference of Catholic Bishops, put it, we are witnessing an effort to reduce religion to a private activity. “Never before,” he said, “have we faced this kind of challenge to our ability to engage in the public square as people of faith.”

With this week’s lawsuits, the bishops join a growing army of other plaintiffs around the country, Catholic and non-Catholic, who are asking the courts to repel an unprecedented governmental assault on the ability of religious persons and groups to practice their religion without being forced to violate their deepest moral convictions.

Religious freedom is subject to necessary limitations in the interests of public health and safety. The HHS regulations do not fall into that category. The world has gotten along fine without this mandate—the services in question are widely and cheaply available, and most employers will provide coverage for them.

But if the regulations are not reversed, they threaten to demote religious liberty from its prominent place among this country’s most cherished freedoms. That is why Cardinal Dolan told CBS’s “Face the Nation” on April 8: “We didn’t ask for this fight, but we won’t back away from it.”

Read the whole thing. In related matters, I’d just like to say that I am happy to see women of faith like Professor Glendon speak out in the public square. Yesterday we saw Chancellor Jane Belford speaking eloquently on the matter as well. Shocking as it may seem though, some folks don’t think the Jane Belfords and Mary Ann Glendons of the world rate their “woman cards.” Really.

I love that guy! And I love this group too: WomenSpeakForThemselves. Check ’em out!

May 22, 2012
Cardinal Dolan on CBS This Morning with Charlie Rose
Next Post

May 23, 2012 Because the Catholic Church is Flying Under the Gaydar, and Way Over It Too UPDATED
Recent Comments
0 | Leave a Comment
Browse Our Archives
get the latest from
Catholic
Sign up for our newsletter
POPULAR AT PATHEOS Catholic
1

Hypocrisy, Dr. Seuss, and the Red...
Steel Magnificat
Related posts from Why I Am Catholic